By Jabril Faraj, Milwaukee Neighborhood News Service - Jun 2nd, 2016 11:07 am
Get a daily rundown of the top stories on Urban Milwaukee 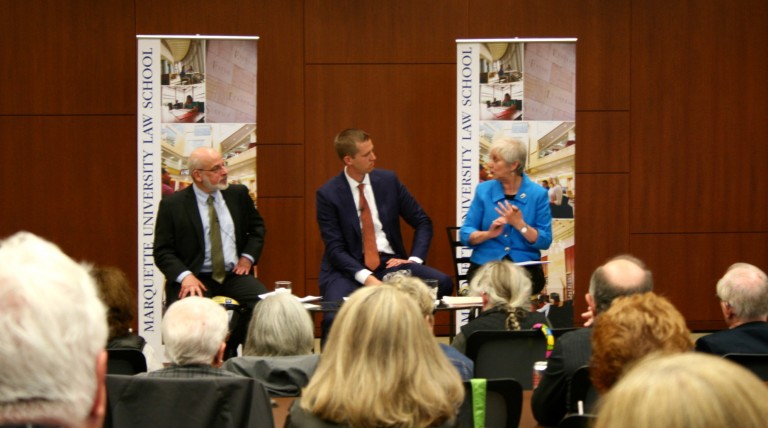 Milwaukee educators and Republican state politicians have been at odds over school funding for years, but Milwaukee Teachers’ Education Association (MTEA) Executive Director Lauren Baker and state Rep. Dale Kooyenga agree that the way schools are currently funded is not working.

Baker agreed, saying per-pupil spending caps, which have been in place since the early 1990s, place different values on students depending on the district they are in.

Kooyenga and Baker made their remarks during a recent event at Marquette University Law School, moderated by Alan Borsuk, senior fellow in law and public policy.

For Milwaukee Public Schools (MPS) the revenue limit — or amount of money the district is allowed to receive per student from state aid and property taxes — is $10,261. That number is $1,307 less than the Elmbrook (Brookfield) school district, which Kooyenga represents. If per-student funding in Milwaukee were equivalent to Elmbrook, MPS would have received more than $99 million in additional funding for the 2015-16 school year. 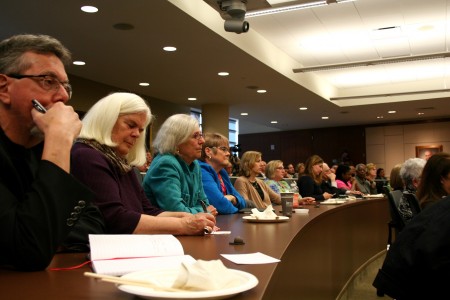 “I envision libraries in every one of our schools, that are open every day of the week,” said Baker. “I imagine beautiful health career and engineering labs, and art teachers and music teachers in every school.”

In the 2003-04 school year, the furthest back for which data is available, Wisconsin public schools received an average of $9,297 per student from state funding and property taxes. Over the next seven years, total per-pupil funding steadily increased, largely as a result of rising property tax revenue and an influx of federal funding after the beginning of the Great Recession in 2008.

In 2011, when Republicans gained control of both houses of the state legislature, state funding for public schools was cut by more than $430 million, compared to the previous year. That decrease brought state per-pupil aid back to 2003-04 levels, almost $4.75 billion. When factoring in inflation, public schools received about $1 billion less in 2011 than in 2003-04.

“We were handed a difficult financial situation,” said Kooyenga of the budget in 2011.

But Kooyenga said the cut wasn’t just about money. “Act 10 … was also about [giving us] a tool to try things differently in our classrooms.”

Act 10, also known as the Wisconsin Budget Repair Bill, was proposed by Gov. Scott Walker and passed by the Republican-controlled legislature in 2011. The controversial legislation stripped public sector employees (including public school teachers) of collective bargaining rights. The move prompted demonstrations and protests in Madison and around the state.

Baker said she would be willing to talk about increasing aid for charter and voucher school students when those schools have democratically elected boards and conform to state open records and meetings laws. “You could do everything they’re talking about doing and do it within the public schools, and provide the funding for it,” she said, adding, “School systems all across the state … are still suffering from less funding under [Walker’s] administration.”

The Wisconsin Department of Public Instruction (DPI) has proposed a new school funding plan, called Fair Funding for our Future, in each of the last three budget cycles dating back to 2011. The plan would create a base amount of funding for every student, provide more money for students who are economically disadvantaged and simplify the formula by eliminating two complicated tax credits.

Though certain small measures have been adopted, according to DPI spokesman Tom McCarthy, the plan has largely not been implemented. McCarthy called the current funding formula “not reflective of what’s actually needed in our classrooms and schools.” Although the plan does not explicitly lift funding caps or allow for funding to follow students, Fair Funding takes those, and the many other, factors involved in school funding into account.

“We’ve grappled with all of those different give-and-takes and levers that make the school funding formula complex and tried to present it and reform it in a way that most people can understand,” McCarthy said.

He added that the goal is to allow parents and community members to engage with school districts to help set budgets that reflect their priorities, and to distribute money in a way that recognizes the needs of children.

According to Kooyenga, the best way to achieve this is to “move the conversation for the correct amount of funding [for] a school from the politicians of Madison to the local community.” He said school districts can raise more funds through community referendums and noted that the “vast majority of those referendums have passed.”

McCarthy agreed it would be a good idea to revisit the revenue limits, saying, “I think that’s a growing pressure just because of how tightened budgets have been over the last six to seven years.”

Kooyenga said he would like to see more money for charter, voucher and public schools in the next budget.

OSPP Commissioner and Mequon-Thiensville Superintendent Demond Means, who has said increased funding is needed for educational outcomes to improve in the state, said he is prepared to “advocate fiercely” for more resources in the next budget, particularly for children “in difficult learning situations.” But Means is pessimistic about the prospect of legislators rising to the challenge.

Factoring in general and categorical aid (targeted funds for special education, transportation and more), DPI’s Fair Funding plan would cost $570 million more than the state budgeted in 2015, over two years.

“Budgeting is about priorities,” McCarthy said. “It’s a doable thing if you’re willing to line up the priorities to support it.”