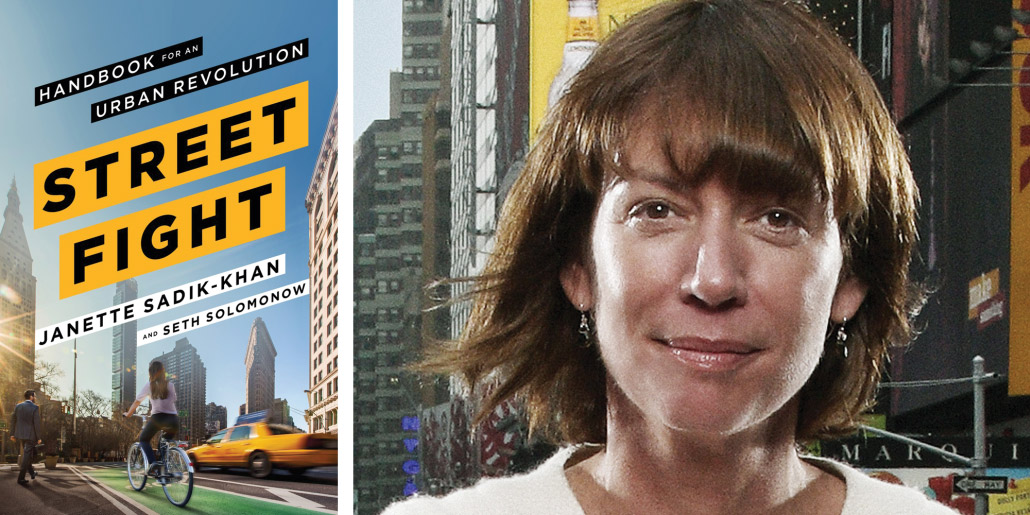 Despite the rise of ever more skyscrapers over the past ten years, New York City is a whole lot more human-scaled at street-level. That’s due in large part to a figure described as “equal parts Jane Jacobs and Robert Moses,” former New York City transportation commissioner Janette Sadik-Khan. A legend in urban planning circles, Sadik-Khan reshaped Times Square by turning Broadway into a pedestrian street and built bike lanes across the entire city. The end result of her tenure under Michael Bloomberg is a city that leads the nation in bicycle and pedestrian friendliness.

Learn how she did it in her just released book on reshaping cities for people, Streetfight: A Handbook for an Urban Revolution.

We will convene for discussion and a social hour on May 16th in the backroom of My Office, 763 N. Milwaukee St, at 6 p.m. All are welcome to attend, the discussions are informal and open-ended. If you don’t finish the book, don’t worry. Come to listen, learn and engage.

The book is available from Amazon, the Milwaukee Public Library, and bookstores everywhere.

Janette Sadik-Khan is one of the world’s foremost authorities on transportation and urban transformation. She served as New York City’s transportation commissioner from 2007 to 2013 under Mayor Michael Bloomberg, overseeing historic changes to New York City’s streets—closing Broadway to cars in Times Square, building nearly 400 miles of bike lanes, and creating more than 60 plazas citywide. A founding principal with Bloomberg Associates, she works with mayors around the world to reimagine and redesign their cities. She chairs the National Association of Transportation Officials, implementing new people-focused street design standards that have been adopted in 45 cities across the continent. She lives in New York City.

Seth Solomonow is a manager with Bloomberg Associates. He was the chief media strategist for Janette Sadik-Khan and New York City’s transportation department under Mayor Michael Bloomberg. A graduate of Columbia University Graduate School of Journalism, Solomonow has written for The New York Times and his hometown newspaper, The Staten Island Advance. He lives in Brooklyn, New York.

One thought on “Book Club: The Urban Revolutionary”