Rome Was Reached in a Day

Spring Classic 2 riders peddle to Rome, WI and back, 85 miles in chilly weather.

By Dave Schlabowske, Bike Federation of Wisconsin - Apr 8th, 2016 04:39 pm
Get a daily rundown of the top stories on Urban Milwaukee

Group photo outside the Bike Fed’s office as we waited for some riders to catch up after they flatted early.

Ten minutes before I was about to roll from my house to Ben’s Cycle for our ride to Rome, I get the following text: “Dave and Paul, sorry I won’t be riding to Rome with you this morning it’s too cold for this old man. Have a blast.” – Name withheld to protect the sensible

Even though most sane people won’t get up early on a Sunday morning to go for an 85-mile ride when it is only 28 degrees outside, I managed to find about 75, let’s call them “single-minded” cyclists who would. I’ll give the credit to the sunshine for that increase since only about 40 showed up last weekend when it was 38 degrees and raining. But hey, we only had a handful on the original Spring Classics Rides, so we are moving in a positive direction.

Promptly at 8:30 a.m., about 40 hardy souls rolled out from Ben’s Cycle on 10th and Lincoln, but we picked up almost that same number of hardy souls in Greenfield Park on our way west on the New Berlin Recreational Trail. Thanks to the cold temperatures, our large group had the trails almost to ourselves the entire day. Riding two-up at 17-18 miles per hour on a smooth, car-free trail sure makes for better conversation and less stress than most road rides.We were headed pretty much straight west to Rome, a “census-designated place,” as it’s called, in the Town of Sullivan in Jefferson County.

With a fairly strong group up front, we made good time to Wales, where the plan was to stop at Mama D’s to refuel on fresh coffee and schencks. About two-thirds of the train decoupled from the engine as we pulled off the Glacial Drumlin Trail. The rest of the front group kept pedaling for Rome without us. We waved and shouted hasta luego, as we queued up in the cozy little cafe for a warm and delicious respite from the outside. 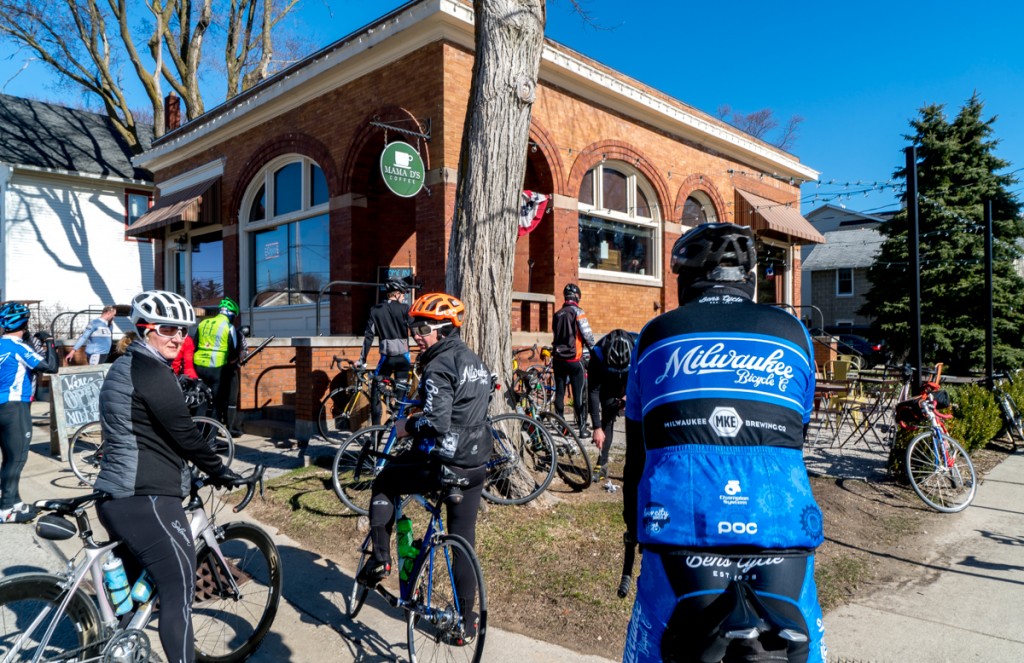 Mama D’s Coffee in Wales is right off the trail.

After 20-30 minutes, it was time to saddle up and hit the trail for Rome. With the faster leaders off on their own, the pace of the group slowed a couple miles per hour, but we still made good time. We did see our faster friends riding toward us just outside Rome. The doppler effect compressed our shouts of encouragement as we passed each other, but it was all smiles no matter which way your bike was pointing. 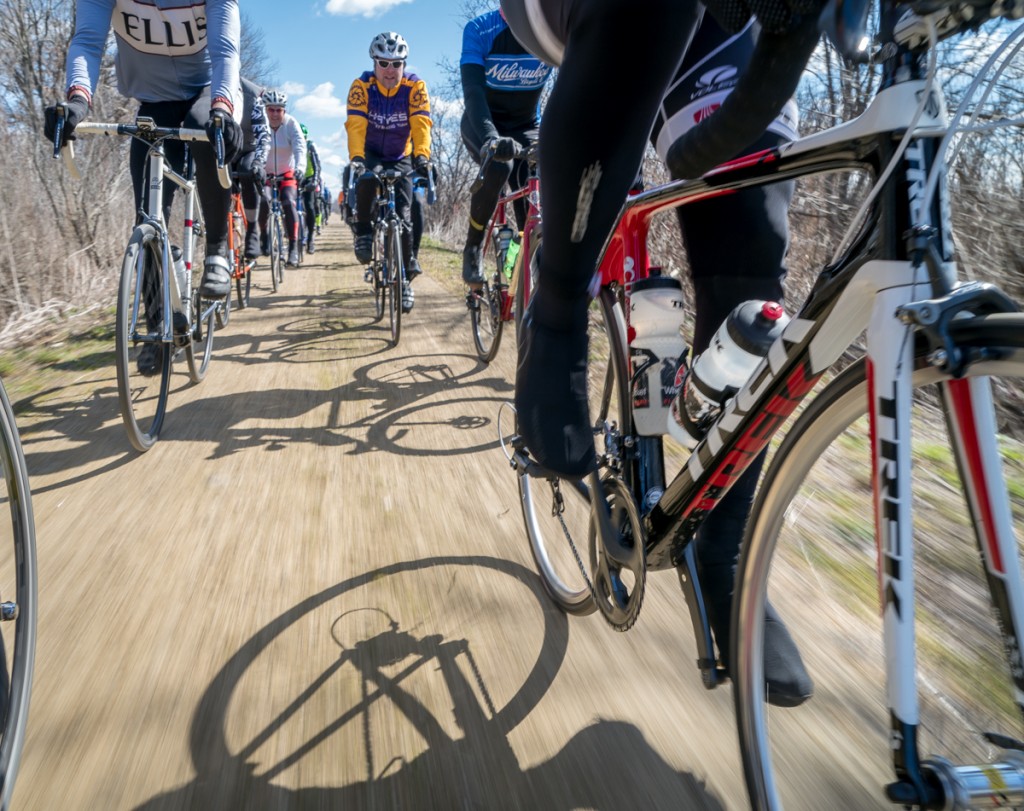 Crushing gravel for a bit west of Wales.

We arrived in Rome at 10:45, not too shabby considering we had to stop for a flat and for the coffee break in Wales. Some folks stopped in for fresh-baked turnovers at Picket’s Country Store, while others chose to light up a Tipparillo to keep their heart rate elevated while we waited for a few off the back to catch up for the group photo. Some turned around at Wales and headed back, probably showing more sense than lack of fitness.

Fifteen or twenty minutes later, the remaining 40 of us were rolling again, but this time headed back east toward home. The mood in the peloton remained up-beat, and not a pedal was turned in anger as we chatted our way along. We did have to bring the pace down a touch again, as a few of the riders were feeling the long miles in their early season legs.

Another flat split our group again, and I was down to riding with a dozen other guys. Since we were riding on a trail, it was no big deal. With literally no turns to make until we hit Greenfield Park, there was no fear of anyone getting lost. Sticking in smaller groups when someone flats is still in keeping with the no-drop policy, but is a nice way to let tired riders keep their momentum. Our small group split again when we got to Greenfield Park, as the West Siders headed home and the rest continued on to Ben’s.

As with last week, nobody had an appetite to stick around at the shop and watch any racing or hang out. Tired riders preferred to head directly home for a hot shower and a warm meal. Ride organizers for future Spring Classics rides should take this into account. I think it would be a waste to put out a big spread back at the shop if nobody is going to stick around to enjoy it.

With the ride from my house down to Ben’s and back, I ended up with a touch over 100 miles for the day. Tired legs aside, me and most everyone else seemed to have a great time. Thanks to everyone who came out for the ride and special thanks to Paul and Vince from Ben’s Cycle for hosting the start today.

3 thoughts on “Bike Czar: Rome Was Reached in a Day”