For decades the arduous work was done by hand -- with the help of lots of horses. 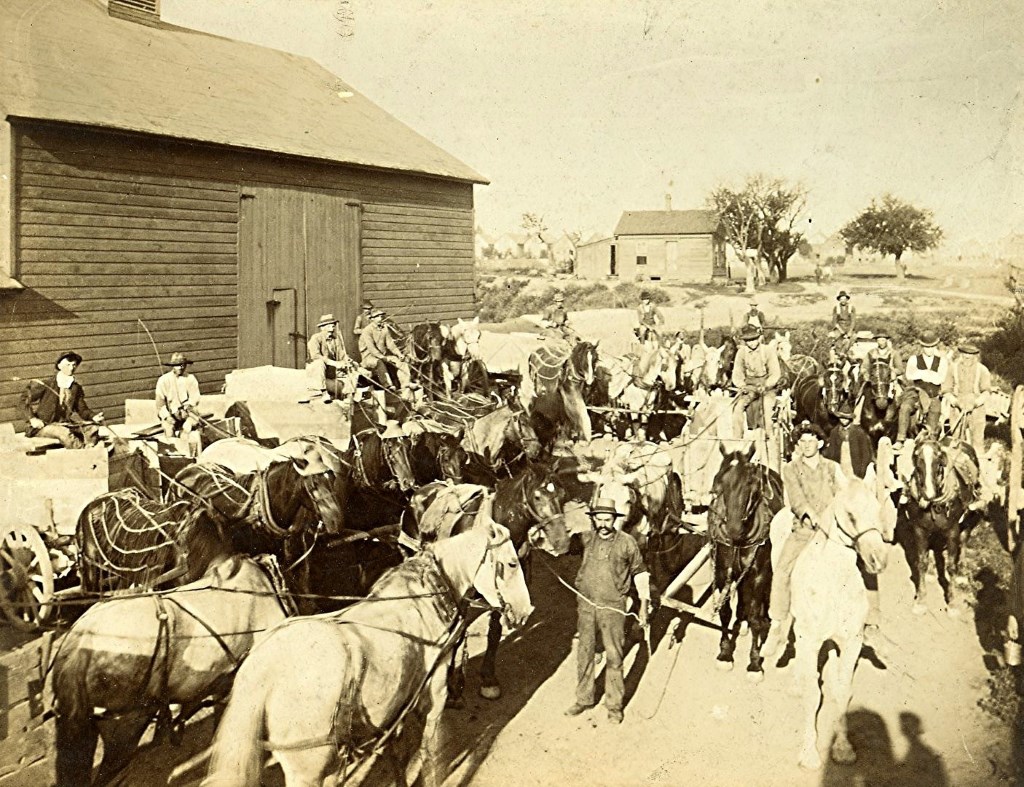 The manufacture of Cream City brick required a great deal of hand labor and plenty of horses, at least until the process began to be mechanized in the 1880s. But by a stroke of luck the main brickyards in Milwaukee also had great access to rail and water transportation. As early as 1859 samples of the brick were shipped to Hamburg, Germany. Chicago and New York would become major markets. The city was known for its bricks well before it became known for beer. A National League baseball team which played in Milwaukee in 1878 was commonly known as the Cream Citys.

The largest brickyards were located on the fringes of the city, but the forces of growth would eventually limit their expansion. In this photograph of a brick factory (circa 1885) notice how close houses already are. The prime deposits of the right clay were limited, the brick color provided by large amounts of lime and sulfur. The best deposits were found on the bluffs that lined the Menomonee Valley, and two major producers, the Burnham company and Bond & Hatchett, were located in the valley.

Just imagine the amount of labor required to transport the brick from the kilns to the storage sheds and eventually to a railroad car or ship. This would require massive amounts of horse power complete with very sturdy carts. As one historian writes: “At a majority of Milwaukee plants, particularly the smaller operations, clay was dug out with the use of picks and shovels and hauled to the yards in carts. Many yards set up temporary rail lines to haul clay by carts pulled by horses… The production was ‘seasonal, cyclical and badly paid, [and] … required substantial amounts of young and unskilled labor,’ of which there was no shortage in Milwaukee. Through most of the nineteenth century, bricks were hand-molded and set in wooden brick molds. An average output for a twelve-hour workday was 9,000 to 10,000 bricks per worker using this method.”

The first bricks were being made by the 1830s and for decades after this, there was some mechanization, but not very much. The arrival of an earth-moving machine in the 1880s — which helped transform brick making — will be discussed in next week’s column.