Media Used By Right Against Kloppenburg 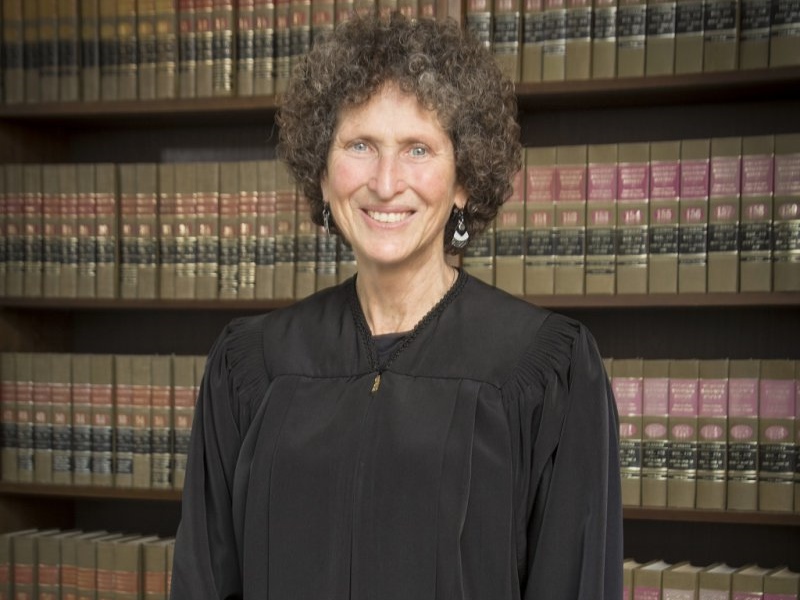 In a March 15 front-page article, the Journal-Sentinel and its reporter Patrick Marley in effect accused Wisconsin Appeals Court Judge—and Supreme Court candidate–JoAnne Kloppenburg of hypocrisy by participating in a decision involving an organization that had opposed her election. This accusation is implicit in the first two paragraphs of Marley’s article:

In her two bids for the state Supreme Court, JoAnne Kloppenburg has criticized as too weak an ethics rule that says political spending on its own isn’t enough to force a judge off a case.

But as an appeals judge in 2014, Kloppenburg remained on a case involving a group that spent against her in her unsuccessful 2011 race for the high court. Her ruling kept alive an investigation of Gov. Scott Walker‘s campaign, the Wisconsin Club for Growth and other conservative organizations.

The insinuation is also implicit in the headline added by Marley’s editor: “JoAnne Kloppenburg stayed on case involving group that opposed her.”

Marley does not point to any rule—either in existence or proposed—in Wisconsin or elsewhere that supports the theory that a judge should recuse herself if one or the other party in a case supported her opponent. For authority the best he can do is quote the conservative legal activist Rick Esenberg:

The problem, of course, is that if you can’t sit on a case that might involve someone who has spent on your behalf, you ought not be able to sit on one involving people that spent against you,” Esenberg said by email. “A debt of gratitude is no greater source of bias than a desire for revenge. In fact, in my experience, vengeance is often far more powerful than gratitude.”

Since then, Kloppenburg’s opponent, Rebecca Bradley, has picked up the same theme. In a debate she criticized Kloppenburg for not recusing herself. Should judges recuse themselves when one of the parties worked to defeat that judge?

There is superficial symmetry to this argument, as Esenberg points out. However, in practice it would serve to undermine the goal of reducing the influence of campaign money in judicial elections and protecting the independence of the courts.

Essentially such a rule would give groups looking to use the courts for their agenda two cracks at eliminating a judge by using election spending: first, by spending to advocate the judge’s defeat and, if that is unsuccessful, to, second, demand recusal on the basis that the campaign against the judge must have prejudiced her against the party. Presumably, the more unfair the attacks on a judicial candidate the more prejudiced the judge against the source of the attacks, and the stronger the expectation of recusal would be. Thus such a rule would set up a no-lose scenario for those with the desire and ability to spend large amounts on judicial elections. Indeed, it would reward them for doing the most outrageous attacks possible against judges they opposed.

Wisconsin is already receiving negative attention nationally for the amount of money spent in the last few state Supreme Court races. At some point, an impression that the court is for sale to the highest bidder hurts the state’s attractiveness to companies. That was reflected in the brief from several large companies in the Caperton case in which the US Supreme Court ruled that a West Virginia justice benefitting from huge donations from one of the parties should have recused himself. Courts viewed as independent are good for the economy. 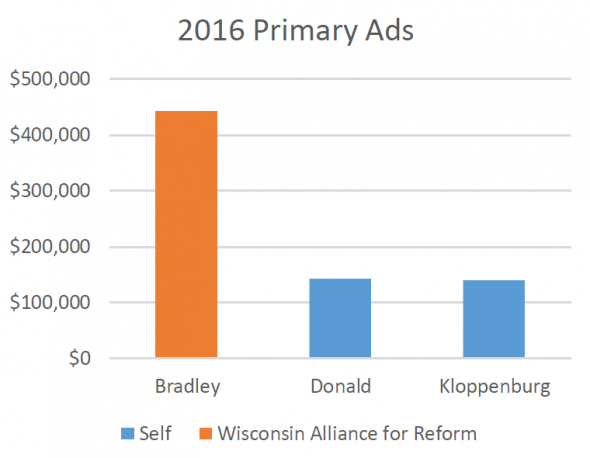 Today the current Wisconsin Supreme Court election is already following the pattern of very large spending, particularly on the right. The graph to the right shows spending on the primary, estimated by the Brennan Center for Justice.

Apparently Rebecca Bradley spent none of her own funds, presumably saving them for the general election. Instead the role previously played by Wisconsin Manufacturers and Commerce (WMC) and the #Wisconsin Club for Growth# seems to have been taken over by a new right-wing group, called the Wisconsin Alliance for Reform. The Alliance is also running ads against Russ Feingold and distributed flyers attacking Iowa county DA Larry Nelson, presumably to punish him for his participation in the John Doe investigation of coordination between Walker and outside groups. That strongly suggests the Alliance is connected to the Club for Growth or WMC, who were targets of the Doe investigation.

Preliminary estimates from the Brennan Center show the Alliance for Reform ramping up spending up its spending in the general election. Note that these are estimates based on FCC reports from television and radio stations. The Alliance uses the “social welfare organization” loophole to avoid report its spending or its donors. By next Tuesday’s election, it is likely that spending by both sides will be much larger than so far reported. 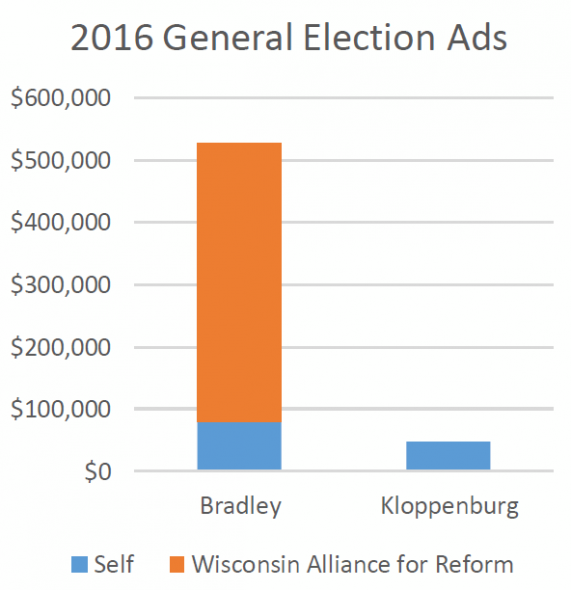 It is worth noting that groups supporting a particular judge for either ideological or economic reasons seldom disclose their true motivation. Instead the standard approach, on both the right and the left, is to pose as concerned about the criminal justice system: they go through the records to find cases in which the target of their ads could be made to appear too lenient on a defendant.

Could bitterness about the attacks from the WMC and Club for Growth have affected Kloppenburg’s thinking in ruling against a challenge to the John Doe investigation of collaboration between these two groups and Friends of Scott Walker? One can never know for sure. However, the fact that she was one of three judges–one of whom was originally appointed by Republican Gov. Tommy Thompson–who joined in a unanimous decision shows the ruling found legal grounds that satisfied all three judges.

The Kloppenburg story closely followed articles disclosing Bradley’s bizarre writings while attending Marquette and her representation of a client with whom she was romantically involved. These elicited strident denunciations of the newspaper from the right, such as this from the Wisconsin Watchdog:

The Milwaukee Journal Sentinel has shown its hand in its disparate coverage of the conservative justice and her liberal opponent for the Supreme Court seat, Appeals Court Judge JoAnne Kloppenburg. It’s clear that the newspaper that has spewed so much hatred over the past several years against Republican Gov. Scott Walker is going after his appointee to the bench, while handling with kid gloves the liberal candidate who falls  in line with the newspaper’s ideological slant.

The Watchdog is an online publication that got much of its funding from a group set up by Wisconsin Club for Growth leader Eric O’Keefe, and that has run hundreds of articles attacking the Doe investigation and/or defending O’Keefe. But its attacks and those by conservative talk radio host Charlie Sykes may have had an impact on the Journal Sentinel.

The newspaper’s story implicitly accusing Kloppenburg of an ethics violation may show it in damage control mode, looking to “balance” the Bradley disclosures and thereby show its even-handedness. Unfortunately, to advocate that judges recuse themselves when a party has worked to defeat him or her would only reward and encourage those who have already politicized the Wisconsin Supreme Court.

8 thoughts on “Data Wonk: Media Used By Right Against Kloppenburg”