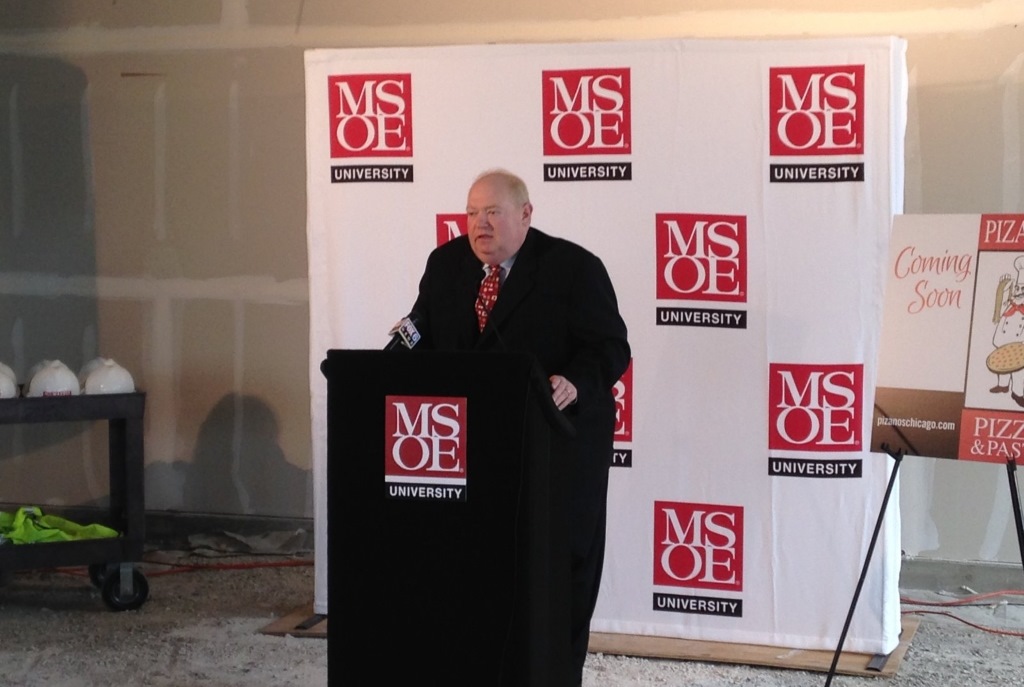 The famous Chicago restaurant chain is making progress on its construction at the space beneath MSOE apartments tower, which is located at 1154 N. Water St. Originally, it was supposed to open in the spring of 2015. But due to construction delays, according to owner Rudy Malnati Jr., it is now expected to open sometime this June. The Milwaukee Journal Sentinel’s Carol Deptolla reports:

“The bar will be separated from the dining room but visible through glass walls. Banquet space will be able to accommodate up to 100; in all, the restaurant will seat about 240.

Pizano’s would be open late daily, closing one hour before bar time, but Malnati said he is exploring whether it could deliver pizza after closing, as late as 5 a.m.”

Who doesn’t enjoy a good Pierogi? That’s exactly what Gosia Glazer, who was born and raised in Poland, and her husband, Stephen Glazer were thinking. Deptolla describes the new food truck the couple is planning:

“Called Stuffed, it will sell savory and dessert pierogi at festivals in the area and downtown at lunchtime.

The Glazers expect to serve five dumplings to an order; the pierogi would be sauteed and served with sour cream or another dip, although customers can have the pierogi simply boiled instead. Prices would be around $6 or $7 a plate.

Their truck, the former Link Up Foodie vehicle, could be on the road as soon as May 1.”

On March 20th, the lounge’s owner Nate Fried reopened its doors. The remodeling of Angelo’s Lounge, which is located at 1686 N. Van Buren St., is finally finished, despite some structural issues. OnMilwaukee.com‘s Molly Snyder reports:

“Although almost every inch of the space was resurfaced, the vibe remains lounge-y and mid-century modern. Fried made some smart moves like putting the piano / performance space in the center of the south wall and highlighting the original bar as the focal point of the space overall.

The walls are adorned with a few black-and-white gems of Martellano’s along with meaningful pieces from Fried’s life as well.”

A new restaurant serving contemporary American food is coming to 501 E. Silver Spring Dr. in Whitefish Bay, in a space that was the longtime location of the gift shop Placesetters. The name of the restaurant hasn’t been chosen, nor has the chef, but the emphasis will be on local food and healthy dishes. Deptolla dishes more details:

Knowing that female executive chefs are a relative rarity in Milwaukee and the nation, they’ll encourage women to apply for the role. ‘We like the idea of trying to change the landscape,’ Green said.

The owners are projecting seating for about 40 in the dining room; the restaurant also would have a bar and eventually a patio.”

Shay Linkus from the Vanguard restaurant and Madison chef Jonny Hunter (whose Underground Food Collective operates Forequarter Restaurant) are joining forces this Saturday, March 26, on a pop-up restaurant:  The chefs will serve from the Underground Food Collective truck, which will be parked in front of The Hotel Foster (2028 E. North Ave.) starting at 7 p.m. and serving until the food runs out. Ann Christenson has the details:

“The menu is short and sweet: four kinds of Salvadoran stuffed masa cough cakes called pupusas (varieties: queso, pork and blue corn, duck and chili, and veggie and blue corn), two burgers, and a wheatberry-radish salad. The pupusas come with what pupusas should come with: curtido (cabbage salad), salsa and cream, or escabeche.”

An Indian-style market will be opening on the East Side. Alongside the Indian style groceries, clothing, jewelry and other handicrafts, according to owner Ravi Sachdeva, various types of specialty microbrews, such as Sam Adams alongside imported Indian Beers, will also be offered at the market which will be located at 1556 N. Farwell Ave.