The success of Donald Trump in the Republican presidential nominee has stunned most observers. That includes me. Here’s my prediction — dead wrong — from a Data Wonk column from last October:

It appears unlikely that Trump will be elected President or even win the Republican nomination. It is alarming, however, that so many of our fellow citizens have given up on America. It is even more alarming that some on the left are willing to promote this alienation.

Why have so many Republican primary voters decided that America needs to be made “great” again and have turned to a strong man to make that happen? One factor is the very success of the conservative establishment in convincing the Supreme Court to outlaw most restrictions on campaign spending. 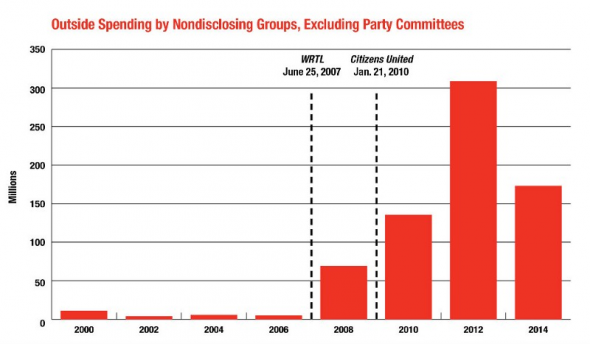 As a result, campaign spending by wealthy individuals and groups has exploded. This chart, from the Brennan Center for Justice, shows the rapid growth in political funding nationally by groups that do not disclose their donors. The graphs shows minimal spending before the Wisconsin Right to Life decision of the U.S. Supreme Court in 1997 which held that issue ads may not be banned from the months preceding a primary or general election, and a big bump in spending after this. The next jump in spending came after the Citizens United decision allowing corporations to run independent political ads. Eric O’Keefe, who runs the Wisconsin Club for Growth, was among those conservatives who pushed for this decision. He helped create the Center for Competitive Politics in 2005, which “filed influential briefs,” O’Keefe’s official biography claims, in Citizens United.

All this was before the Wisconsin Supreme Court’s decision to allow coordination between outside groups and candidates by ruling against John Doe investigation of coordination between the Club for Growth and Gov. Scott Walker’s campaign committee. If allowed to stand, that decision is likely to lead to even more spending. 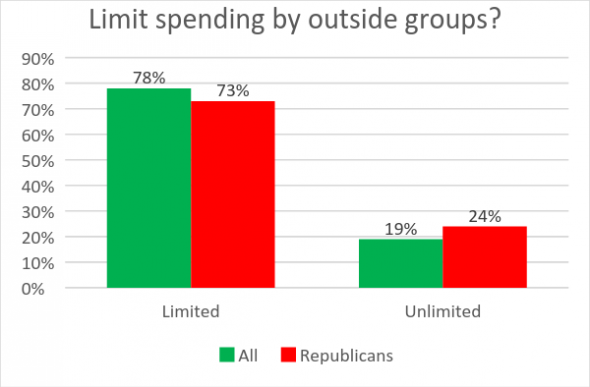 Limit spending by outside groups?

The resulting election finance scheme, where almost anything goes, has proven overwhelmingly unpopular with the American public. In contrast to other issues, that break along party lines, opposition to unregulated political spending enjoys support from a majority of voters, whether Democratic, Republican, or independent.

The chart to the right, from a New York Times poll last June, shows the response to a question as to whether spending by outside groups should be limited or unlimited. Republicans were only slightly less supportive of limitations than other voters.

Increased dark money—where the contributors to outside groups are not reported–is also deeply unpopular among voters. The next chart shows the results from a Marquette Law School poll last November. Republican voters were as supportive as other voters of disclosure.

A Bloomberg poll last September found a similar sentiment when it came to the Citizens United decision allowing corporations to run independent political ads. 80 percent of Republicans opposed it and said the decision should be overturned. 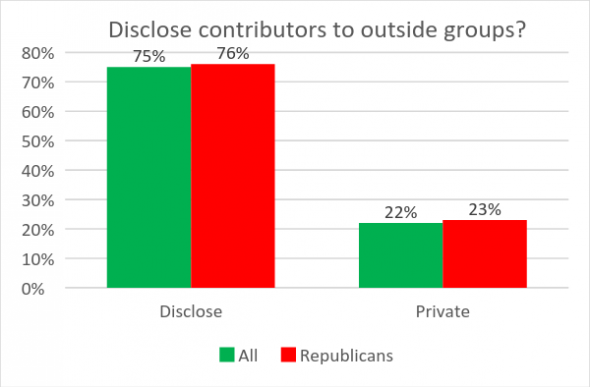 Disclose contributors to outside groups?

Before the official presidential primaries get going, there is an “invisible primary” with candidates courting the donor class. A year ago, Republican candidates were crossing the country to make their case to major donors, such as the Koch brothers and Sheldon Adelman.

Here is a New York Times account from last April of one such pilgrimage, a Walker visit to an event sponsored by David Koch:

“When the primaries are over and Scott Walker gets the nomination,” Mr. Koch told the crowd, the billionaire brothers would support him, according to a spokeswoman. The remark drew laughter and applause from the audience of fellow donors and Republican activists, who had come to hear Mr. Walker speak earlier at the event, held at the Union League Club.

Two people who attended the event said they heard Mr. Koch go even further, indicating that Mr. Walker should be the Republican nominee. A spokeswoman disputed that wording, saying that Mr. Koch had pledged to remain officially neutral during the primary campaign.

But Mr. Koch’s remark left little doubt among attendees of where his heart is, and could effectively end one of the most closely watched contests in the “invisible primary,” a period where candidates crisscross the country seeking not the support of voters but the blessing of their party’s biggest donors and fund-raisers. 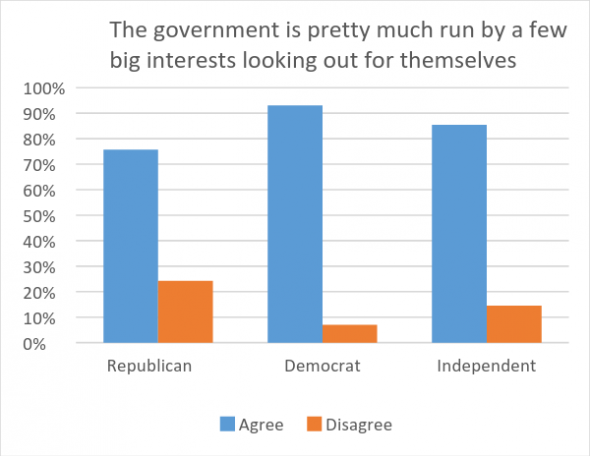 The impression this leaves is that the donors, not the voters, call the shots. Both the amount of spending by outside groups and the solicitude of candidates like Walker courting them contributed to a growing belief that, in the words of a question on the Marquette poll, “government is run by big interests looking out for themselves.” As shown in the next chart, this sentiment is widely shared by self-identified Republicans.

In his campaign for the presidency, Trump shrewdly exploits this sentiment, as in a recent Trump tweet:

Remember, I am the only one who is self-funding my campaign. All of the other candidates are bought and paid for by special interests.

In this context, the early success of Walker, Jeb Bush, and other Republican “establishment” candidates in raising money looks less like strength than a measure of their dependency on the donors. A candidate dare not cross the donors for fear of shutting off the flow of campaign money. Playing on this, Trump turned his ostentatious wealth from a political liability to an asset.

O’Keefe’s Club for Growth has emerged as perhaps Trump’s most adamant conservative critic. It has spent millions of dollars in a so-far futile effort to diminish Trump’s support among Republican voters and has committed to spending at least two million in Wisconsin. Instead of objecting to Trump’s attacks on Muslims and immigrants, or his admiration of dictators, the Club’s attacks have concentrated on Trump’s deviations from conservative Republican orthodoxy. The Club’s lack of success suggest that Trump’s supporters don’t find these arguments particularly compelling.

In fact, the fight with the Club for Growth works to Trump’s advantage by allowing him to assert his independence. Here is another recent Trump tweet:

The Club for Growth is a very dishonest group. They represent conservative values terribly & are bad for America.

In recent years Republican candidates have continued to win elections by exploiting the fears and frustrations of the white working class, people lacking a college degree and paid a wage rather than a salary. Any doubt that this is a stressed-out demographic has been settled by the recent discovery that middle aged whites are increasingly killing themselves through suicide, excessive drinking, and drug use. That this pattern is not seen in other nations, nor among American blacks or Hispanics, suggests there is something unique among this group’s experience.

Unlike blacks or Hispanics with similar economic challenges, the white working class gets little sympathy from the left. Members are dismissed as racists or worse. When the terrible lifestyle statistics were first published one reaction was mystification—why were white self-inflicted death rates getting worse when blacks, worse off economically, were becoming less self-destructive? This mystification forgets that optimism depends more on one’s perceived trajectory than on where one is at any particular time.

Globalization brings winners and losers. Overall, it has benefitted college graduates by making many products cheaper. By contrast, members of the white working class have seen factory jobs disappear.

In recent years, the defection of members of the white working class from the Democratic Party has allowed the Republican Party to offset the growth of demographic groups like Hispanics favoring Democrats. But it did nothing to solve the problems of the white working class. Instead the Republican establishment doubled down on its standard program of cutting programs like Social Security and Medicare, while reducing taxes on the wealthy. Today it is paying the price.

Now that the white working class is turning to Trump, the conservative establishment treats them with a disdain far beyond that of the left. Here is a quote from a recent column by the National Review’s Kevin Williamson:

The white middle class may like the idea of Trump as a giant pulsing humanoid middle finger held up in the face of the Cathedral, they may sing hymns to Trump the destroyer and whisper darkly about “globalists” and — odious, stupid term — “the Establishment,” but nobody did this to them. They failed themselves.

Williamson’s column was enthusiastically endorsed by his colleague David French:

Kevin is right. If getting a job means renting a U-Haul, rent the U-Haul. You have nothing to lose but your government check.

One thought on “Data Wonk: Did Club for Growth Help Create Trump?”