Polls of Wisconsin voters and other data provides disturbing clues.

Donald Trump’s continued success in the polls has surprised many observers and horrified the Republican establishment. I’ve examined various data to help explain his rise.

1. What can we learn from the Marquette poll?

Consistent with other states, Trump leads among the numerous candidates for the Republican nomination in Wisconsin. Surprisingly the poll did not show a gender gap in Trump’s support, something other polls have found. (This could easily be a sampling error. The overall sample is divided roughly in half to get likely Republican voters; it is halved again to get women; and finally allocated among the candidates. After all this slicing and dicing the number of women in the sample choosing Trump as first choice is down to about 16.) 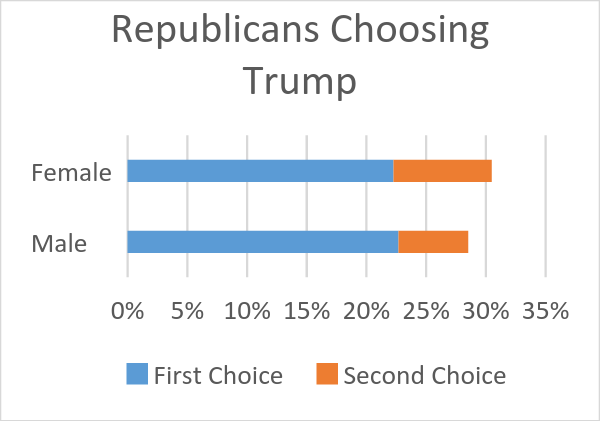 The small group choosing Trump as their second choice actually puts him behind several other GOP candidates when first and second choices are totaled. This suggests his potential primary vote may be capped at around one third of the votes. Still, one-third of Republican voters is a substantial part of the American electorate and it is worth exploring their motivations.

In the following analysis, I have omitted those without an opinion. Normally this decision could be problematic, particularly this early in a campaign. With Trump, however, almost everyone (96 percent) is willing to express an opinion. 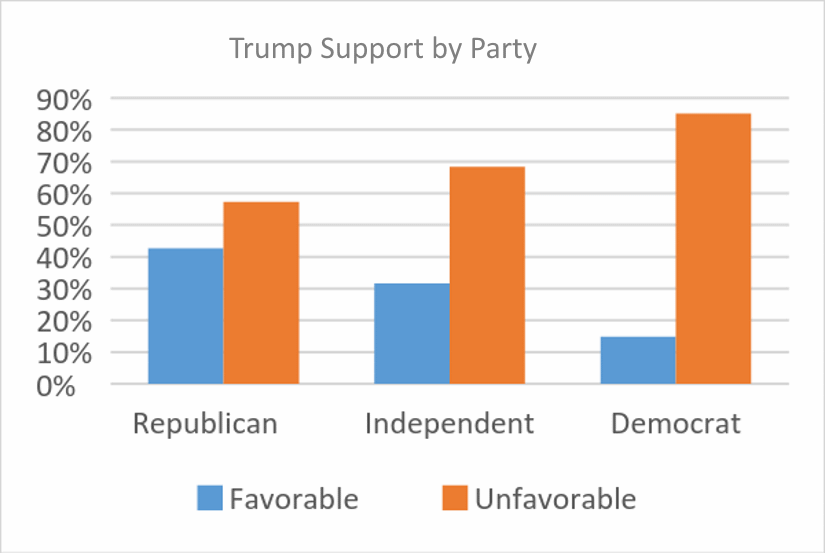 As the next chart shows, there is a gender gap in Trump’s favorability ratings: 35 percent of men regard him favorably, compared to 25 percent of women. This might seem to conflict with the lack of a gender gap among Trump supporters. Like men supporting Trump, they may view his comments as refreshing candor. 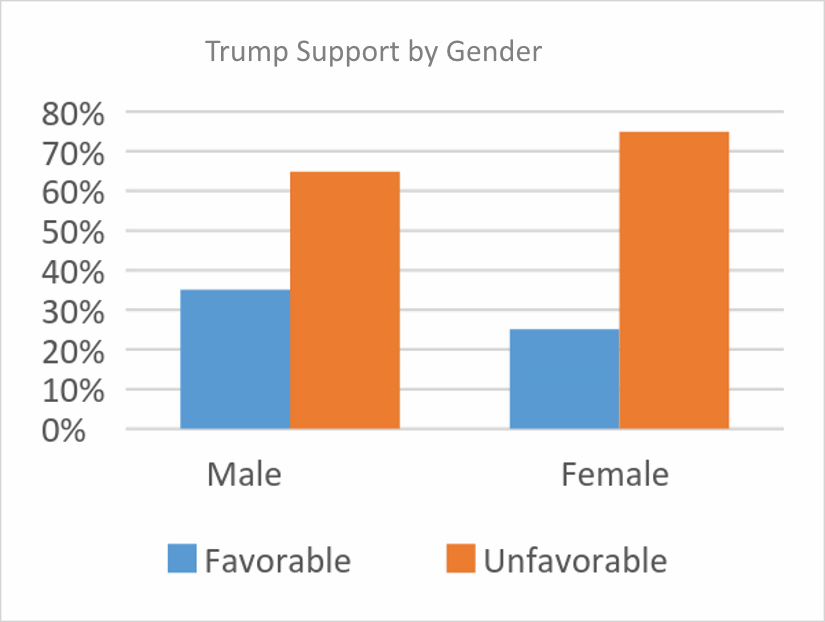 Support for Trump declines with the voter’s education, as shown on the next plot. 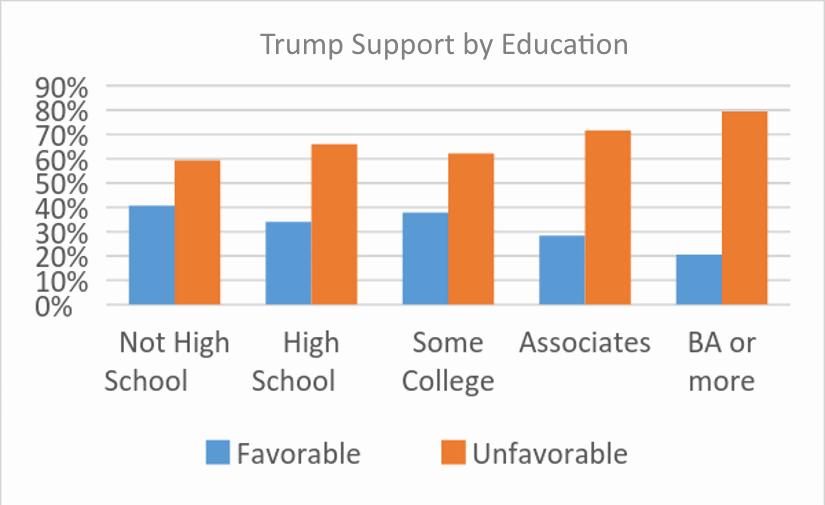 There is also an age effect. Support is particularly low among those under 30. It peaks with the 30-44 group and declines thereafter. 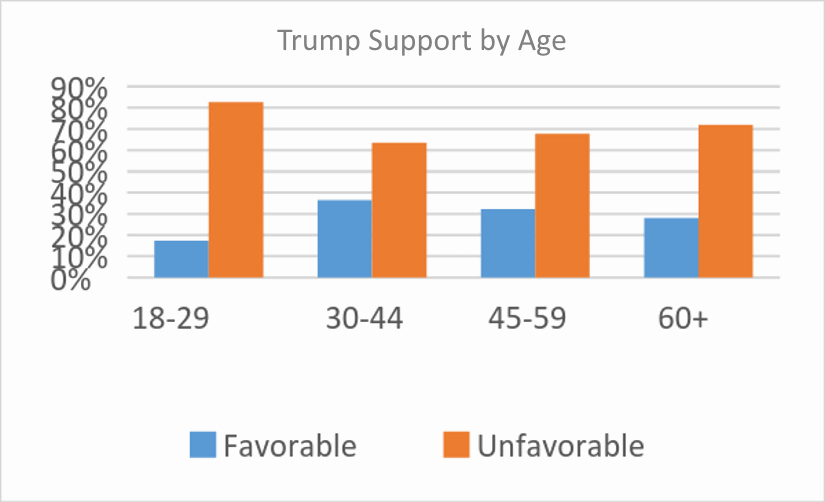 Although there is a fall-off in favorability among blacks and Hispanics, it’s less than I would have expected, particularly among Hispanics considering Trump’s comments on immigrants. 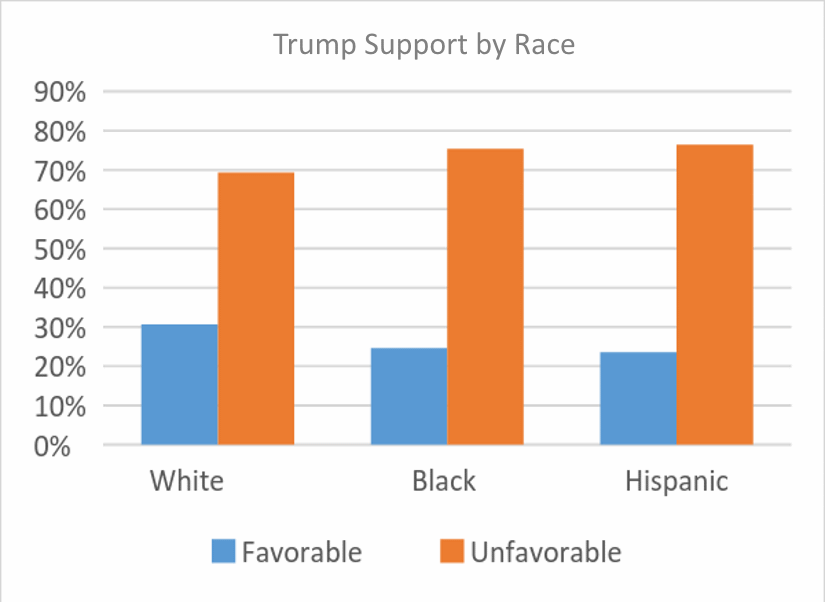 Trump supporters seem to be more rural than urban or suburban. 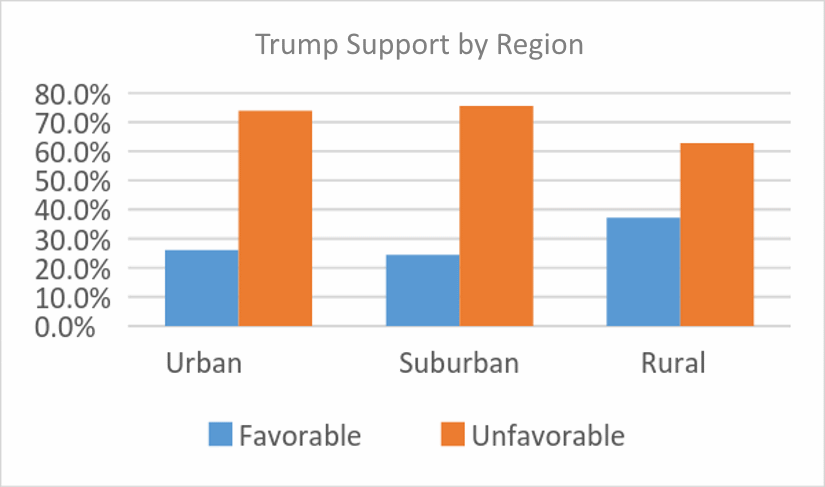 The MU poll results by regions is consistent with evidence that Trump is strongest in rural areas. He does most poorly in Milwaukee and its suburbs and the Madison area, better in Appleton and Green Bay, and best in the rest of Wisconsin. 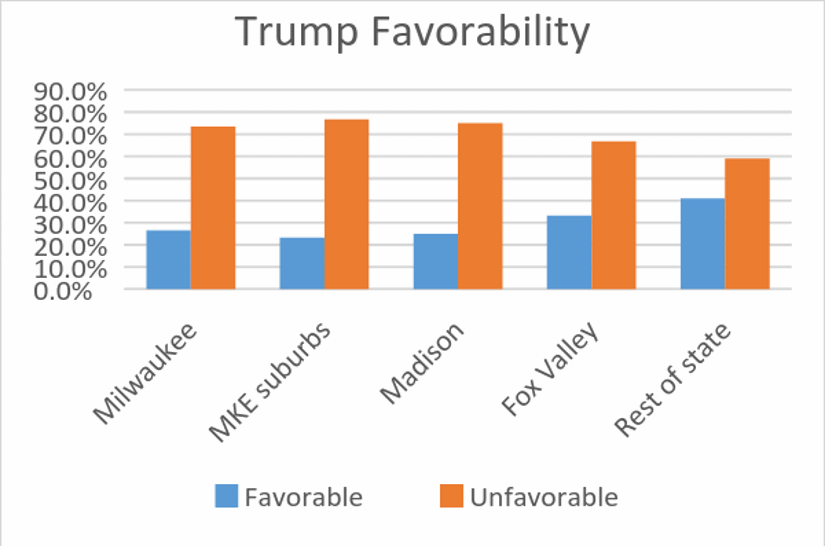 A number of other factors did not seem to have a large effect on attitudes towards Trump. These include income and religion.

These results are consistent with polls in other states. As elsewhere, Wisconsin residents favorable to Trump are more likely to be male, white, less educated, and live in rural areas. In other words, they look an awful lot like the grandchildren and great grandchildren of the core supporters of the New Deal.

2. What motivates the Trump supporters?

The Marquette poll, and others, help explain where the Trump voters can be found. Unfortunately, it tell little about what motivates them.  Most polls, including Marquette’s, are not set up to allow analysis of how Trump supporters differ from, say, other Republican voters on a specific issue.

An NBC poll found that Trump Republicans are largely conservative, but are more likely than other Republicans “to support the Confederate flag, own a gun, think the government should support traditional values and believe that black Americans who can’t get ahead in society are personally responsible for their own condition,” but the differences were not great. The two areas where they differed the most were their greater opposition to immigrants and a reluctance to treat abortion as a make-or-break issue.

Trying another approach, Atlantic magazine columnist Conor Friedersdorf asked readers who support Trump to write explaining why. He published thirty of the responses. The responses range for Trump’s entertainment value to fears about illegal immigration. Several describe their choice as between Trump and Bernie Sanders. Others point to Trump’s business experience, that he got things done. Political correctness was mentioned repeatedly, moving Trump’s boorishness from a liability to an asset. If there is any theme it is unhappiness with business as usual.

3. What does Trump tell us about his supporters?

Trump’s campaign has stressed several themes: opposition to immigration,  that America has fallen on hard times, as expressed in the campaign title: “Make America Great Again,” and that he is a blunt teller of truths who is not beholden to donors.

Trump is a prolific user of Twitter. Most of his tweets are about him: how big his crowds are and how well he is doing in the polls. He famously attacks icons of the right wing: Fox News, Eric Erickson and Glenn Beck, for example. These feuds seldom revolve around policy disagreements—their crime is disrespecting Trump. 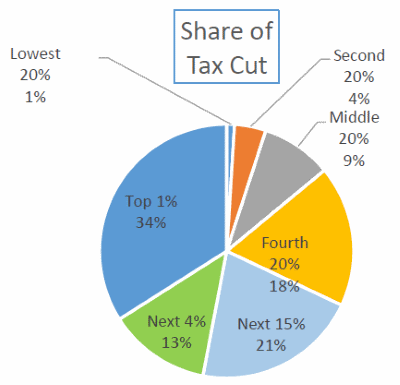 At one point in his Twitter comments, Trump suggested he might break with current Republican economic orthodoxy that prosperity depends on taxing rich folks less. He tweeted: “The hedge fund guys (gals) have to pay higher taxes ASAP. They are paying practically nothing. We must reduce taxes for the middle class!”

But any expectation that Trump would propose reversing the growing inequality gap were dashed with the release of his tax proposal. As the chart shows, the richest 1 percent would get one-third of the cut and the top 20 percent would get two-thirds, leaving one-third for the other 80 percent  of Americans.

In addition the Trump proposal would result in a huge increase in the deficit. Think tanks on the right and left quickly added it up and found costs exceeding 10 trillion dollars over 10 years.

In the end, the difference between Trump and the other Republican candidates is more about style than substance.

4. What is the driving force behind Trump supporters?

Trump seems to tap into two sentiments among Americans: a sense of unfairness and a dread of impending doom. The first is illustrated by a passage from one of the Trump supporters quoted in the Atlantic:

… Trump embodies the frustration and rage of the white middle class. This is his main support base and is an ever shrinking group that no longer feels they have a voice. Politicians pay lip service to the middle class but spend no time helping them. Black lives matter more and illegal immigrants who break the law get a free pass.

It’s not hard to find evidence to support that viewpoint. A quantitative analysis of Democratic Party platforms found the agenda had shifted away from general social welfare to policies based on race, ethnicity, gender, and sexual orientation in the second half of the last century.

The talk, popular in some universities of “white privilege,” can reinforce the sense that the white middle class is part of an unfairly targeted and threatened minority. What its advocates view as an attempt at inclusion can look an awful lot like exclusion.

Some on the left have certainly done their part to nurture that sense of doom, stressing how changing demographics will soon make Republican victories a thing of the past. But even political neutral efforts to promote diversity can reinforce this sense of doom.

An advertorial in the National Journal entitled The Economic Impact of Changing Demographics in the United States is an example. It reports on a conference sponsored by MasterCard on diversity and its advantages. (While at first glance the material looks just like a normal National Journal article, fine print makes it clear that it is “Sponsor Content,” written by the sponsor, which turns out to be MasterCard.) 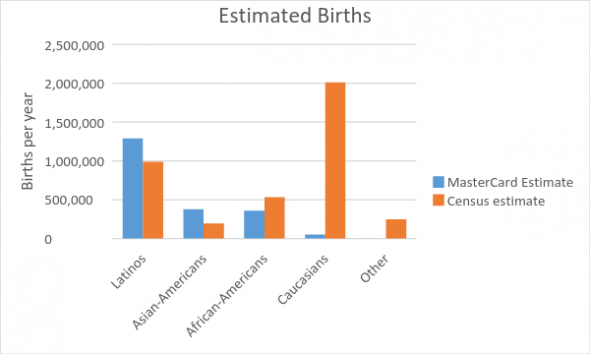 Perhaps to make its point more dramatic, the piece begins with some dramatic statistics: “There are 147 Latinos, 43 Asian-Americans, 41 African-Americans, and six Caucasians born every hour in the United States.” In other words, out of every 100 babies, fewer than three are “Caucasian” (presumably meaning white and non-Hispanic). If one believes this, white Americans have opted for extinction. Pretty unsettling, particularly if one is already inclined towards the Trump viewpoint.

The claim is also very wrong. The chart below compares the births claimed in the article to the Census Bureau’s estimate for births in 2014, which shows Caucasians still have by far the most births.

The source of the erroneous MasterCard statistics is unclear. However, the fact that no one recognized their implausibility is itself a reflection of how much the demographic transition has been oversold.

It appears unlikely that Trump will be elected President or even win the Republican nomination. It is alarming, however, that so many of our fellow citizens have given up on America. It is even more alarming that some on the left are willing to promote this alienation.