Why Mortality is Rising for Middle Aged Whites

Since 2000, the death rate for this group has begun rising. Are there political causes? 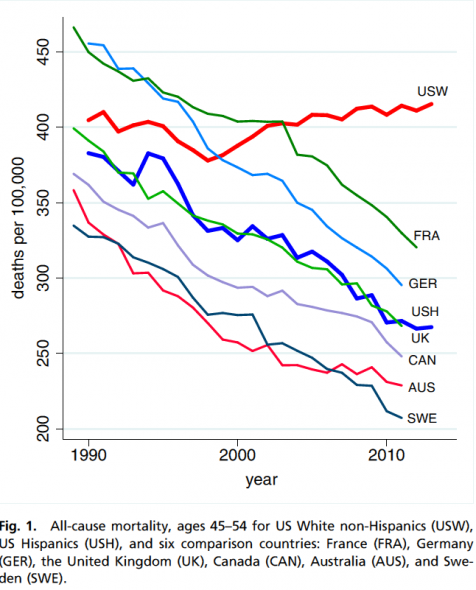 Is it a coincidence that deaths are increasing among the demographic that is most supportive of Donald Trump—people who are white, middle aged, and have less than a college education? This is also the demographic that in recent years has increasingly defected from the Democratic Party, but has been largely ignored by those planning social policy.

Over the past few decades death rates have been declining among most groups in the United States and other wealthy countries. This decline has been driven by better prevention and health care, as well as by behavioral changes such as a reduction in smoking. However, recently middle-aged white Americans have been an exception to this trend.

A new paper by the Princeton economists Anne Case and Angus Deaton reports that mortality rates have increased among white middle-aged (45-55) white Americans in recent years, at a time when they have been shrinking for other groups.

Figure 1, taken from the paper, shows the death rate for middle-aged white non-Hispanic Americans between 1990 and 2013. Around the start of the new century, it reversed direction and started rising.

This trend is not seen in other rich countries including France, Germany, the United Kingdom, Canada, Australia, or Sweden. Nor is it found among Hispanic Americans or black Americans (not shown on the chart but dropping from 797 to 582, still very high but moving in the right direction). 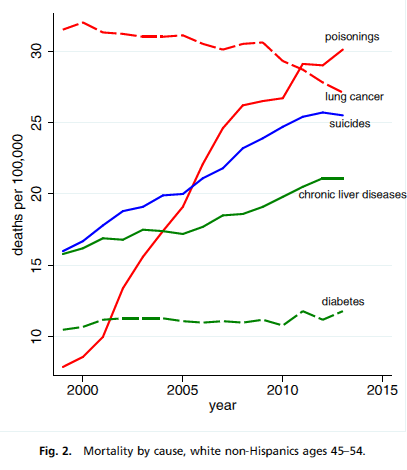 Figure 2. Mortality by cause

Case and Deaton find the increased death rate is largely self-inflicted. It is driven by increased drug and alcohol poisonings, suicide, chronic liver diseases and cirrhosis. Figure 2, also taken from their report, shows the increase in death rates from these three causes. During this period, by comparison, deaths from lung cancer have dropped and those from diabetes have stayed about the same despite the obesity epidemic.

Figure 3 shows that people with less education are far more at risk of dying from suicide, alcohol and drug poisoning, and liver diseases (presumably reflecting excessive drinking) than those with more education. The gap between those whose education stopped at high school and those with a college degree has widened substantially over time, from a ratio of 2.6 in 1999 to 4.3 in 2013.

A scatter plot included in the paper shows steady increases in deaths from both poisoning and suicides in all regions of the US, although somewhat less in the East and Midwest than in the South and West. The authors also include the results from health surveys that show whites in this age group describe their health less positively recently than they did in the late 1990s.

What has caused this change? The truth is that no one knows the answer. Much of the immediate reaction to the Case and Deaton report speculated about the use of opioid pain killers, which in turn can lead to heroin use. 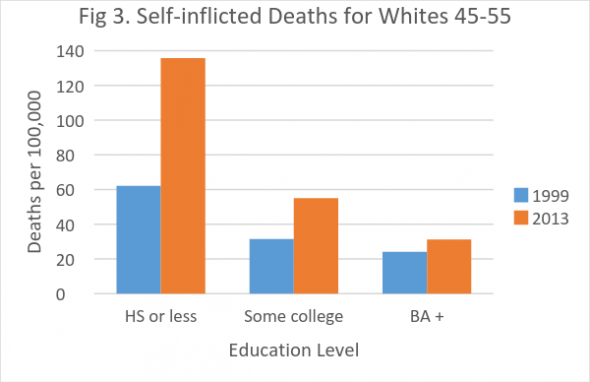 More drinking, drugs, and suicides are a symptom of stress and unhappiness. Several commentators on the study compared the findings to Russia where excessive drinking increased following the collapse of the Soviet Union, reflecting the uncertainty and financial distress of the times.

A second recent report, from the Pew Research Center, throws light on one source of stress. It describes the pressures on families with minor children where both spouses work. As the next plot shows, the proportion of families where both spouses work full-time has displaced the traditional model in which the husband works full-time and the wife runs the household as the most common family pattern. (The obverse where the wife is the full-time worker—what I call “nontraditional” in Figure 5—has grown but still only represents 6 percent of the households.)

The rise of the two-career family can be regarded as progress to the extent that it reflects growing opportunities for women. But for many families—particularly those with less education—the motivation is likely less an interesting job than financial necessity. The one-job family is increasingly an unaffordable luxury for many. 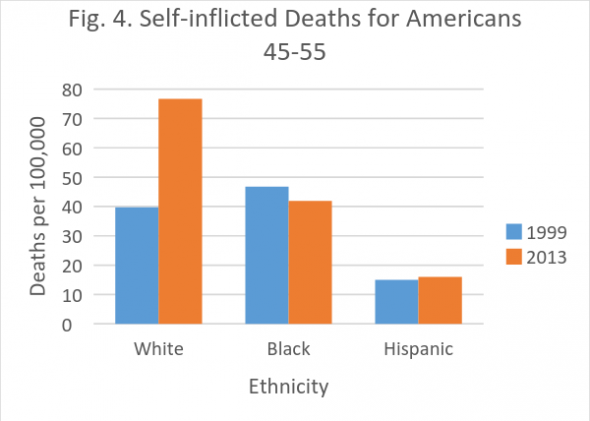 Pew finds that more than half of all working parents say the act of balancing work and family is difficult. Many report that being a parent has made it harder for them to advance in their career.

The Case and Deaton study raises more questions than answers. What is causing the growing self-inflicted death rates among middle-aged whites? Can anything be done about it? Should we drop the emphasis on race and ethnicity and concentrate on people in need, whatever their race?

The increasing death rate among middle-aged white Americans with relativity little education suggests a deep despair in that demographic, sufficient to have changed the trend of white American mortality from decreasing to increasing.

Changes in the economy are no doubt prime drivers of this rising death rate. In Wisconsin, Madison enjoys much the strongest economy. Yet even there, jobs for people without college degrees are disappearing, as most recently reflected in Oscar Meyer’s recent announcement that it would close, even as high tech companies like Epic Systems continue to grow. 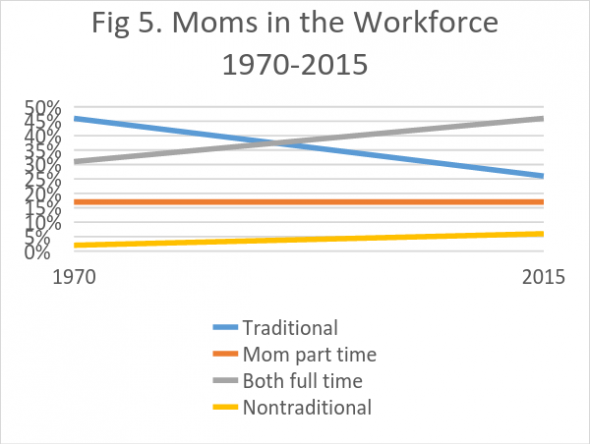 This raises the question as to why African Americans are not showing the same self-destructive reaction to distress; if anything, they have been even more affected by the deindustrialization of the American economy than the white working class. Changes in the economy have not been good for people with limited education, whatever their race. So why haven’t black rates of suicide and death from drugs and alcohol grown along with whites? Perhaps one factor is the greater expectations of whites. The world they knew is going away and they feel forgotten. For black Americans, the past may seem less like a lost utopia.

Another possible source of pessimism could be the widespread myth that Social Security and Medicare are going bankrupt and will not be there for them when they reach retirement age. Typically, proposals to turn these programs into state block grants exempt present recipients and those within 10 years of qualifying. This means that people who are between 45 and 55 today will be the first to be affected if one of these proposals is adopted.

Could support for Trump be another a manifestation of this frustration? His support is strongest among middle-aged white voters without college degrees. He promises to fence out immigrants. He plays up his independence from wealthy donors, promising in his tweets to make hedge fund managers pay more taxes, though his tax plan does not do this.

Too often proposals to help people impacted by economic changes are described as targeted at minorities, either by their proponents or opponents. Yet it clear that a significant number of white Americans are also under stress and would benefit by, for example, a serious program to rebuild our infrastructure.

4 thoughts on “Data Wonk: Why Mortality is Rising for Middle Aged Whites”