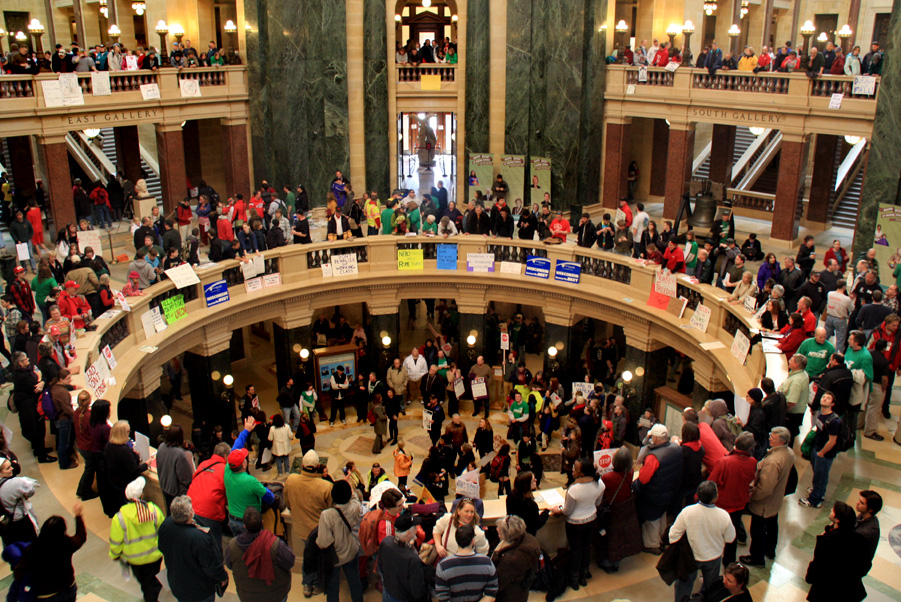 They made – and witnessed – history exactly five years ago, in the months-long Act 10 drama that resulted in a law that decimated public employee unions, made government workers pay more for health care and pensions, and ended the old collective bargaining system. Act 10 also saved state and local governments billions of dollars.

Where are the major players in the Act 10 drama now?

Republican Scott Walker is still governor. Walker pushed Act 10 through the Legislature and became the first governor to survive a recall in American history. His 2014 re-election got him national attention and launched his 71-day run for President last year.

Walker’s approval rating is now 38 percent statewide. But he’s going around the state, holding by-invitation-only listening sessions, gathering ideas for the 2017-19 budget he will recommend early next year – a budget that will help determine whether he seeks a third term in 2018.

Walker’s chief of staff in the Act 10 controversy, Keith Gilkes, left that job in fall 2011 to run the governor’s campaign to survive the recall. Gilkes then quarterbacked Walker’s re-election in 2014 and was a key adviser in the Walker-for-President bid. He’s now a gun-for-hire campaign consultant.

As secretary of the state Department of Administration (DOA) five years ago, Mike Huebsch was in charge of the keeping the Capitol, where protesters camped out for days, from exploding and got emergency updates from police commanders in a fourth-floor command post.

Huebsch later got involved in controversy: records show he repeatedly nudged employees of the Wisconsin Economic Development Corporation to approve a loan or grant to the business of a Walker campaign contributor and after the issue blew up, left DOA in February 2015. He now makes $129,000 a year regulating utilities as one of three Public Service Commission members.

As chief of Capitol Police in 2011, Charles Tubbs was the chief negotiator with Capitol protesters. He was nicknamed “protest whisperer” because he would rather talk protesters into changing their tactics, and moving or leaving the Capitol, than forcibly removing them. Although some Republicans thought Tubbs was too kind to protesters, he survived the Act 10 drama. But he soon got another job, director of emergency management for Dane County, working for a Democrat, County Executive Joe Parisi.

The cop who made the toughest command center decisions, UW-Madison Police Chief Susan Riseling, is still in that job.

The biggest turnover since 2011 has been in the Legislature. Eight of the 18 Senate Republicans who passed Act 10 (all 14 Senate Democrats were in Illinois and didn’t vote on it) are no longer there. One, former Sen. Rich Zipperer, is now the governor’s chief of staff.

Of the four top Senate Republicans in 2011, only one – Majority Leader Scott Fitzgerald – still has that position.

Then-Senate Democratic Leader Mark Miller is still in the Senate, but no longer his party’s leader. One veteran Democrat, Janesville’s Tim Cullen, did not seek re-election in 2014. Cullen wrote a book about what sees as the demise of the Legislature he first joined in 1975; book profits are going to a non-profit group to help public schools.

More than half of the Assembly members who voted on Act 10 on March 10, 2011, no longer serve in that house.  Eight of them – six Republicans and two Democrats – moved to the Senate. Ex-Rep. Mark Pocan is now a Democratic congressman. One of the few Assembly Republicans to vote against Act 10, then-Rep. Dean Kaufert, is now Neenah’s mayor and grudgingly concedes that those reforms worked.

The top three Assembly Republicans in 2011 have moved on: Then-Speaker Jeff Fitzgerald is now a lobbyist with 11 clients, including General Motors. Then-Speaker Pro Tem Bill Kramer left the Legislature in disgrace in 2014, was sentenced to five months in jail for fourth-degree sexual assault, and got addiction counseling. Then-Majority Leader Scott Suder is now chief lobbyist for a major statewide trade association, the Wisconsin Paper Council.

What happened to two unions with the most to lose in the Act 10 debate?

And, there were three separate AFSCME locals in 2011. There is now one.

4 thoughts on “The State of Politics: Five Years After Act 10”