Wisconsin A Leader in Strontium Pollution

73 of 100 worst readings in strontium-laced drinking water were in Waukesha, Brookfield, other towns.

By Jane Roberts, Wisconsin Center for Investigative Journalism - Mar 14th, 2016 03:12 pm
Get a daily rundown of the top stories on Urban Milwaukee 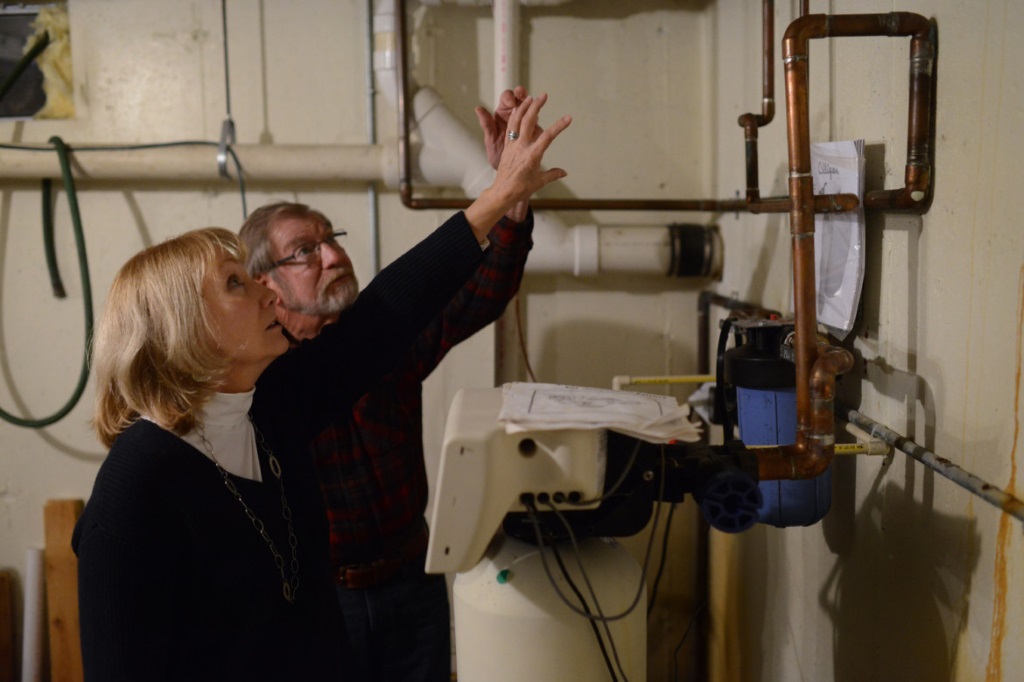 Vicky and Bud Harris of rural De Pere point out the filtration system they installed in their home that removes strontium and other contaminants from their drinking water. The U.S. Environmental Protection Agency is studying whether to begin regulating strontium, which is found in some of the highest concentrations in the nation in drinking water in eastern Wisconsin. Photo by Kyle Bursaw of Press-Gazette Media.

For the past six years, Michael Schnur and his family have been drinking bottled water. Already concerned that pollutants from the coal ash landfill near his home in Sheboygan County might be leaching into his private well, Schnur became even more fearful last year when he received a letter from the state Department of Health Services. It warned that elevated levels of a little-known, unregulated element — strontium — were found in his drinking water.

In follow-up email correspondence, the DHS said the landfill was not impacting Schnur’s water and that strontium occurs naturally in the groundwater. Schnur was advised to install a water softener, which works by replacing minerals like calcium, magnesium and strontium with sodium.

“I have a new baby (coming) in a couple months, which is why it’s really nerve-wracking,” Schnur said last spring. A healthy baby girl, Sophia, was born in August.

Schnur, who acknowledges he is no expert on water issues, remains on alert. His family continues to drink bottled water.

The federal Environmental Protection Agency has made a preliminary decision to begin regulating strontium.

However, in January, the agency delayed a final decision in order to collect additional information. The EPA wants to determine, among other things, whether treatment systems that remove strontium also would remove beneficial calcium, potentially making the effects of strontium on bones and teeth even worse.

EPA data from 2013 to 2015 suggest that some public water systems in eastern Wisconsin contain among the highest levels of strontium found anywhere in the country. Nationwide testing showed 73 of the 100 highest readings came from Wisconsin in communities including Waukesha, Brookfield, Germantown, Kaukauna, Wrightstown and Fond du Lac.

Twenty-nine of the results found in the EPA testing in Wisconsin exceeded the EPA’s 25 mg/L short-term health advisory limit. The highest level found in that round of testing was 53 mg/L in Germantown in 2013. 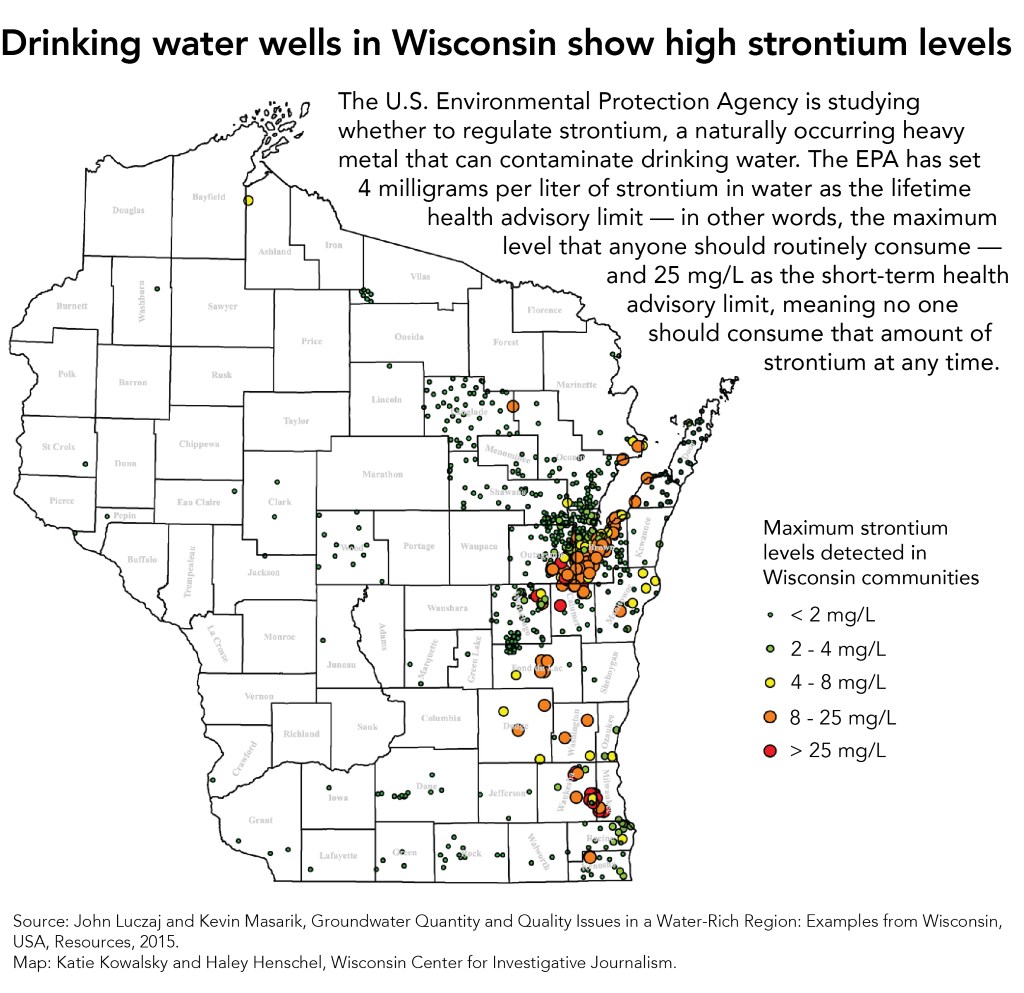 The level of strontium detected in Schnur’s well, 7.2 mg/L, is what DHS toxicologist Roy Irving described as “middle of the pack.”

University of Wisconsin-Green Bay geoscience professor John Luczaj said if the EPA confirms 4 mg/L as an enforceable maximum contaminant level, that would be a “big deal.” According to a study released in June by Luczaj and Kevin Masarik, a groundwater education specialist at the Center for Watershed Science and Education at UW-Stevens Point, strontium is present in the deep aquifer “throughout much of eastern Wisconsin.”

Hundreds of wells throughout the region are affected, including many municipal wells from the suburban Milwaukee metropolitan area north to Green Bay, they found. Particularly high levels were found in parts of Brown, Outagamie and Calumet counties, Luczaj and Masarik wrote.

Luczaj said that while water softeners and reverse osmosis systems can remove strontium, he does not believe that municipal water system customers can be forced to buy expensive treatment systems in order to safely drink their water.

As a currently unregulated contaminant, strontium is still a public health mystery. Limited studies suggest, however, that exposure to strontium at elevated levels could affect infants, children and young adults, as it mimics calcium and is absorbed by their developing bones.

Possible health effects from exposure to high levels of strontium range from “strontium rickets” — in which bones are shorter and more dense than normal — to other tooth and bone deformities, according to a Wisconsin DHS fact sheet.

Bud and Vicky Harris have taken precautions against contaminants in their well water in the home where they have lived for nearly 20 years in the town of Lawrence near De Pere. He is a retired UW-Green Bay professor of natural and applied sciences and she retired from her job as a water quality specialist based in Green Bay for UW-Madison’s Sea Grant Institute.

It is good they took action. A test in 2012 showed 28 mg/L of strontium in the water coming into their home — above the maximum short-term exposure limit recommended by the EPA. A 2013 test showed 22 mg/L, slightly below that limit.

Soon after moving into their home, the Harrises installed a water softener, iron removal system and reverse osmosis system because they were aware of local drinking water problems, especially arsenic. Vicky Harris said the couple has spent thousands of dollars on water treatment systems to remove contaminants.

“For us, it’s worthwhile. Water is health. Water is everything,” she said.

Vicky Harris wonders about the untreated water their son drank from a private well in Allouez near Green Bay before they moved to their current home when he was 8 years old. Their son has mottled enamel on his teeth, which she said could be related to the fluoride also present in the Green Bay area.