C-viche Is An Ethnic Adventure

Peruvian, Mexican and even Chinese flavors intermixed at this new Bay View restaurant. 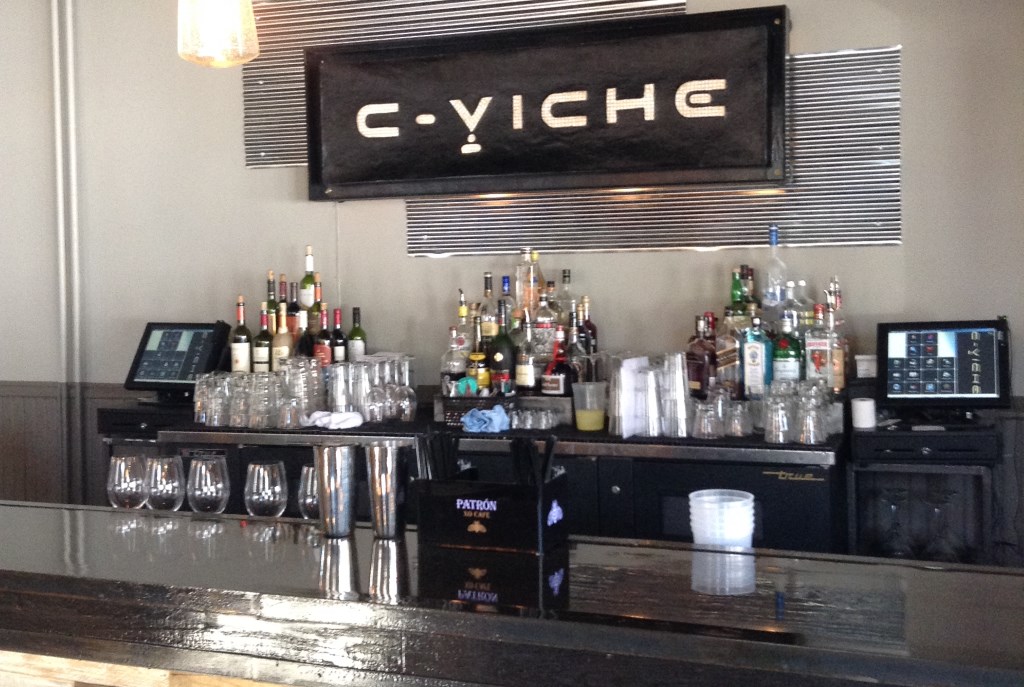 On a recent, busy Saturday night, the staff at C-viche demonstrated grace under pressure. When every seat at every table and every seat at the bar filled up, they carried on as servers delivered plate after plate of Peruvian and Mexican cuisine in this unpretentious newcomer restaurant on KK in Bay View.

We arrived early, before the crowd descended, and counted 14 seats at the bar that extends the length of the restaurant, 11 two-tops and three four-tops. At first we thought it was almost too loud, but as tables filled, conversation trumped the booming background music and it eventually disappeared. A wall of recycled wood strips added a softness to the restaurant whose look could be described as sleek, tasteful, contemporary, urban cool, without trying too hard to impress.

Of course we started with ceviche. Not an easy decision when all the choices sounded interesting. We discarded Vegetariano, lupini beans, and Mixto, the last because it included squid and mussels, not my favorites. That left two variations on shrimp, one with lime juice and one in a tomato puree with citrus and herbs, and the Classic, delicate fish marinated in lime juice and served with sweet potatoes, red onion, and Peruvian style corn.

We ordered the Daily Special ceviche, Ahi tuna served with plantain chips. Small cubes of tuna were piled on chunks of avocado and laced with tiny bits of green onions. We scooped the tuna with the chips until they ran out. Every bite rocked with flavor especially when it included tuna, avocado, chips, and a couple of toasted sesame seeds. That’s when my companion noted, “Every bite is a party in my mouth.” 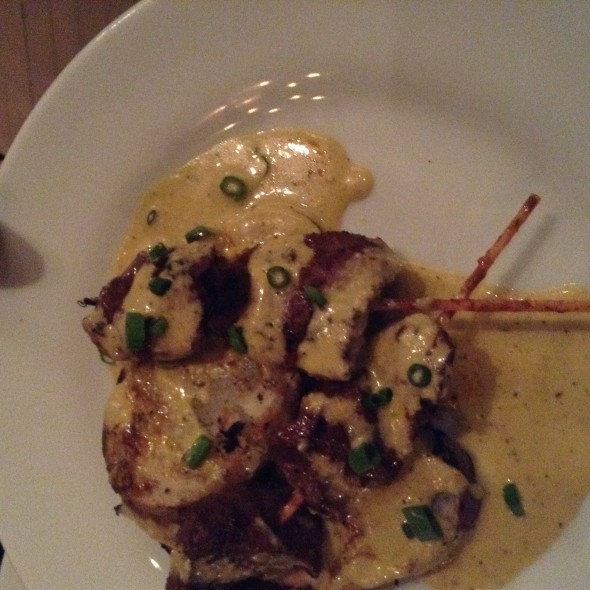 From the Appetizers we ordered the server’s recommendation of Anticuchos, Peruvian street food, specifically skewers with Corazon de vaca (cow’s heart,) potatoes, and corn, drizzled with huacatay sauce.  We must have looked like adventurous diners. That was a brave choice for someone like me, who used to buy bloody cow hearts from a butcher and cut them up for her cat.

We could have ordered something less edgy like boiled potatoes in a Peruvian cream sauce, or fried potatoes with house-made chorizo, or Esquite, Mexican street corn with lime, chipotle spices and crumbled queso de cabra, but we followed the server’s recommendation and thanked her for it.

The sauce made the dish. This blend of lime juice, mint, garlic, and huacatay paste made from a Peruvian herb related to marigold and tarragon, gave it a kick, softened by sliced potatoes with grill marks. The texture of the heart said “organ meat,” however masked it was by the deep flavors in the sauce.

As we nattered on to our server Karla about the alchemy between the sauce and the heart she said, “Maybe it tastes so good because we make everything fresh here.”

We’re on a roll with Karla now, so we followed her next suggestion and ordered Lomo Saltado, beef tenderloin sautéed with onions, tomatoes, garlic, and cilantro, served with fluffy rice and fried potatoes. We decided to share.

The menu description read like a basic stir-fry, fried meat, potatoes, onions, but that impression dissipated at the first bite of delicious. “They elevated the shit out of this dish,” my friend exclaimed as she forked most of my share of sautéed onions on to her plate. “This is so good I’m going to start speaking in tongues.”

The chef took a classic Peruvian stir fry, a simple dish, and brought it into the world of umami with the sauce, a blend of vinegar and soy and a few added ingredients to make it sing.

In Peru, a main dish like this, even if it includes potatoes, is traditionally served with another starch, a side of rice. Curious about this fusion of Chinese and Peruvian cuisine, I went online to learn that the soy sauce came with Chinese immigrants to Peru around 1900 and again after World War II. They brought techniques and ingredients with them, hence the integration of the two cuisines. Add to the soy, rice from the Spanish, and potatoes, a Latin American staple and you have the deceptively simple Lomo Saltado.

Again, thanks to our attentive server, we followed her suggestion and shared Chocolate Flan AKA Impossible Cake from Mexico. The menu promised “smothered in caramel.” That turned out to be our only disappointment. Creamy flan topped with dense chocolate cake hid a bare smear of the promised “smothered.”

On a second visit, this time at noon, I came with high expectations after our extraordinary dinner. From the sandwich menu we ordered Butifarra, a traditional Peruvian sandwich with house-made spiced ham and salsa criolla, and for a taste of Mexico, chicken Mole Panani with panela cheese.

“This doesn’t taste like ham,” my companion said after one bite of her Butifarra. “It tastes like pork.”  We asked our server who explained that it’s not ham as we know it, but actually marinated pork that’s been roasted and thinly sliced. That explained its extreme tenderness.  The pork, combined with an onion and parsley relish and a drizzle of mayonnaise flavored with garlic and lime, created a complex sandwich of many flavors. Her side, Frijoles Puercos, or pork and beans, came in a tiny dish. They had been pureed with Serrano pepper to add heat and served with chopped mint for another layer of interest.

My Chicken Mole Panini had ample slices of roasted chicken in a dark red poblano mole sauce, the original from Pueblo, Mexico. The toasted sesame seeds were an extra as was the slice of mild panela cheese. The mole, albeit delicious, could have used some heat to jazz it up. (And it’s not a “first date” sandwich; I had mole on my face.) My side, Yucca Frita, or fried yucca root, could have been improved with a dipping sauce.

I had a chance to chat briefly with co-owner Karlos Soriano and asked how the chefs prepare all that impressive food in their tiny kitchen. “It’s all about the prep,” he replied. He showed me the backyard that will be transformed into a patio with a deck and a privacy fence. He hopes it will be open for his customers in April.

Soriono is from Peru and co-owner Paco Villar from Mexico, and C-viche draws on traditions in both countries. Their ethnic cuisine adds texture and interest to the growing list of restaurants on Kinnickinnic. 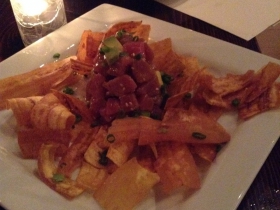 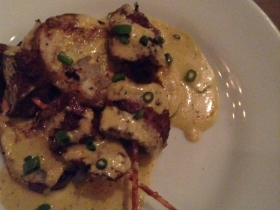 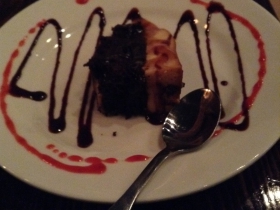 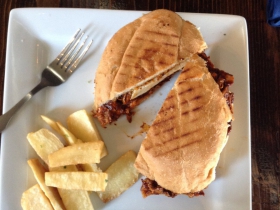 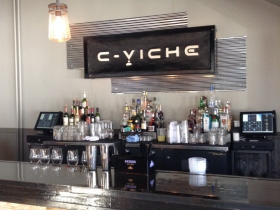 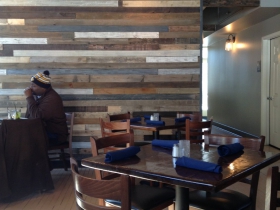 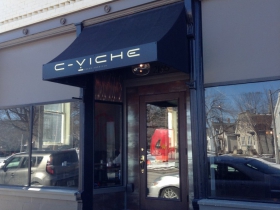 2 thoughts on “Dining: C-viche Is An Ethnic Adventure”