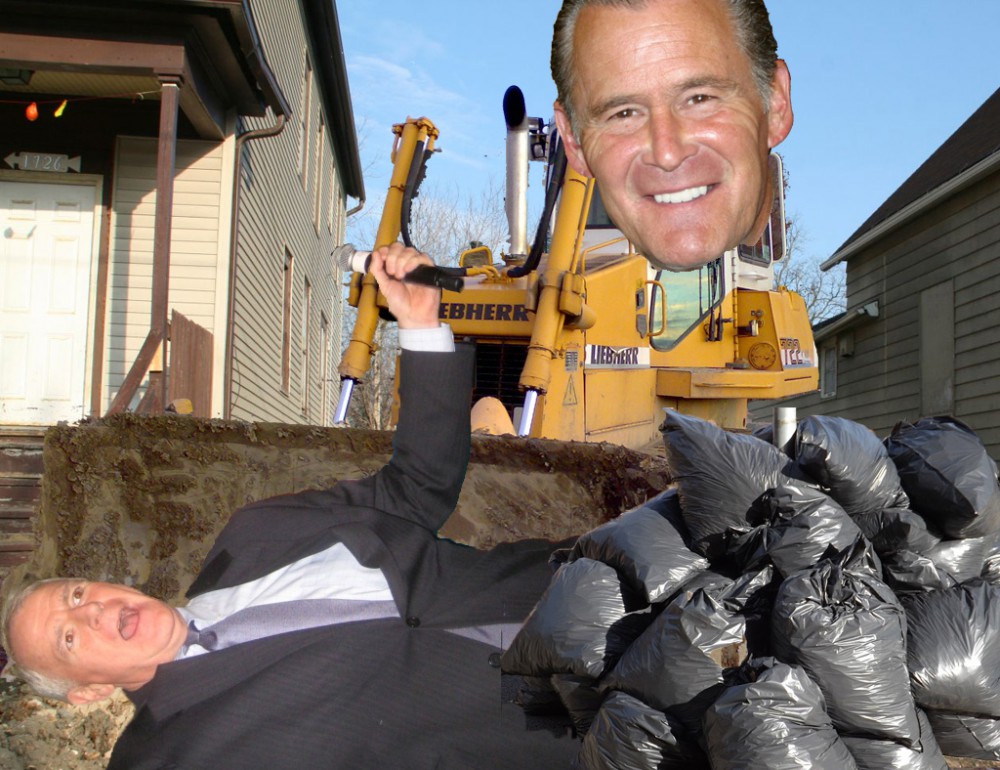 “Bob Donovan is Cleaning Up Milwaukee” proclaims a post on Milwaukee mayoral candidate’s Facebook page, but from there things get dirty. The south side alderman claims his recent public shaming of a dilapidated house at 1730 S. 6th St. got the city to demolish it, but Mayor Tom Barrett‘s office says something completely different, and public records back up Barrett.

Donovan first posted about the house on February 28th, opening with “there’s no excuse for this, Mayor Barrett!” Donovan then claimed on March 3rd that “Tom Barrett works fast when I point out our city’s most dilapidated houses here on my Facebook page.” But a review of Department of Neighborhood Services records for the property show that Donovan’s claim doesn’t hold up.

According to city records, the city issued a raze order following a fire on in 2014. After slapping the property with a number of other violations in the time between, a demolition permit was issued on February 22nd of this year, six days before Donovan first posted about the house. These records can all be seen by utilizing Urban Milwaukee’s under-development building database and city data tracker.

Why did it take so long for the demolition permit to be issued? According to the mayor’s office, it’s a funding issue coupled with the complex legal process that accompanies any raze order. Following the raze order, the Department of Neighborhood Services (DNS) and the property owner went back and forth on rehabbing the structure until January 2015. The city would prefer the owner to make the repairs, but DNS “determined [the] owner did not have wherewithal to undertake the rehab.” The city put the property, as part of a package of properties to be demolished, out for bid in the spring of 2015, but demolition was “delayed due to the additions of commercial properties which caused budget pressures.” Following another solicitation for bids at the start of 2016, the property was demolished.

Why were commercial properties added to the demolition list? According to Jodie Tabak, communications director for Mayor Barrett, city officials believed demolishing residential properties “would have the most impact with the limited demolition dollars available.” But large, deteriorating buildings are forcing the city to include more commercial buildings than originally planned. Tabak used the former Lao Family Community Center at 2331 W. Vieau Pl. as an example, a commercial property Donovan has long sought for demolition,  It’s now under contract for demolition in the next 30 days, but will cost $91,694, the estimated cost of demolishing five single-family homes. So the city is always balancing costs to get the most bang for buck. 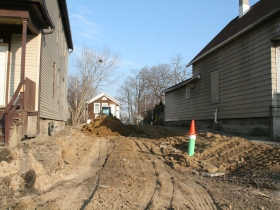 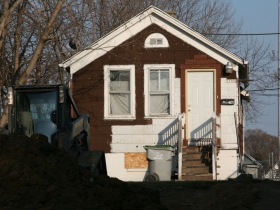 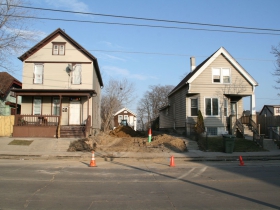 Through the Strong Neighborhoods Plan, the city has demolished hundreds of homes as part of a multi-pronged response to the foreclosure crisis. The city has allocated nearly $36 million to the program since its inception in 2014, which includes $13.43 million to demolish 743 properties. According to figures provided by the mayor’s office, the city demolished or deconstructed 400 properties in 2014, 152 in 2015 and intends to do another 207 this year. A detail-laden report is issued quarterly on the program, the latest installment of which champions over $26.8 million in taxable value resulting from the sale of 530 tax-foreclosed properties (see: “City Sells Another Foreclosed Home“).

A representative from the mayor’s office made sure to point out that Donovan has voted against the city budget the past two years, which included funding for the Strong Neighborhoods Plan and, a frequent Donovan demand, additional police officers.

What’s Donovan’s response? The alderman did not respond to requests for comment on this story.

This isn’t the first time Donovan has made questionable claims about dilapidated homes. On January 29th, he picked on a horribly dilapidated home at 3068 N. 20th St, charging that “This is the true picture of ‘Milwaukee’s Renaissance’ after 12 years of Mayor Tom Barrett’s leadership.” In fact, that turned out to be a test site for the Milwaukee Fire Department. Politifact rated Donovan’s claim as “Pants on Fire.” Donovan responded to PolitiFact’s ridicule by posting a photo of himself in the now vacant lot on February 13th, proclaiming that the house was demolished a month ahead of schedule as a result of his social media posts. Tabak responded that “The decision to move forward with the demolition of this building was made last fall (long before the Alderman raised questions about the property).  However the Department had to wait until 2016 demolition funding became available.”

Donovan isn’t done with his new-found focus on eyesore properties. Claiming victory for the 6th St. and the fire department homes, he’s offering up four more houses on N. 27th St. for demolition in an open letter to Mayor Barrett. Donovan notes that two of the homes have open raze orders. Unlike the 6th St. home, a quick search of city records shows no demolition permits this time. The homes are located at 2101, 2107, 2111 and 2113 N. 27th St.

Tabak noted that “constitutional protections can make this a lengthy process (and rightly so).” The raze orders on the two latest homes were issued on July 27th, and the city could solicit demolition bids as early as May 2016. Looks like Donovan won’t be getting quick demolitions this time, as things aren’t scheduled to move forward until after the April 5th general election.

Donovan and Barrett agree on at least one thing, a proposal making its way through the Wisconsin State Legislature that would delay the city’s ability to seize “zombie homes” is, as Donovan puts it, “ridiculous.”

4 thoughts on “Eyes on Milwaukee: Donovan the Demolisher”