Graphic designer buys what may be the 531st home sold by city. It needs work. 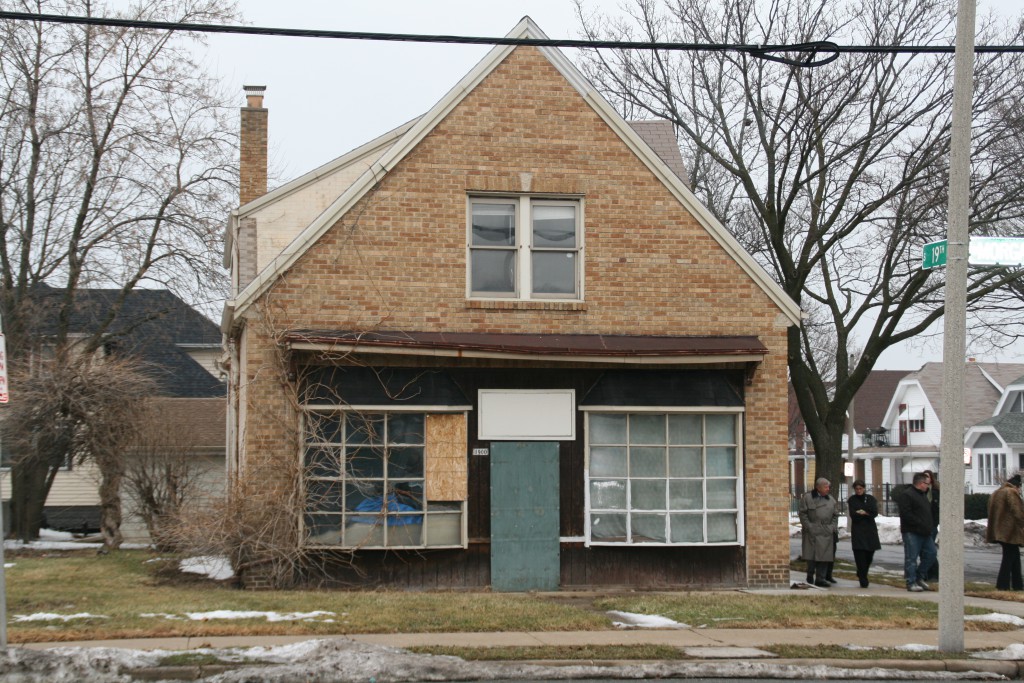 A long-vacant building at 1900 W. Morgan Ave. will soon be home to a graphic design studio led by Michelle Quinn. This will return to productive use one of the over 1,000 tax-foreclosed properties the city has in its possession, a win for taxpayers and one less liability for the city. The renovated building in Milwaukee’s Morgandale neighborhood is one more victory, coming after more than 530 city-owned foreclosures were sold by the city in 2015.

A ceremonial key transfer took place earlier this week, with Mayor Tom Barrett on hand to present Quinn, the new owner, with the keys to the building. Barrett noted that “moving foreclosed properties into circulation has been a priority of my administration for the last few years.” This sale, he added, represents a “micro solution to a macro problem,” with most of the properties the city is selling going to owner-occupied buyers.

Barrett cited three key reasons the city “feels so strongly about putting these properties back into circulation.” One, the city wants to see individuals and families living in the homes, rather than having them sit vacant, which chews up city resources. Two, having too many foreclosed properties in an area can trigger a downward spiral of lower values and more foreclosures that destroys neighborhoods. And three, the city “would rather have this property generating property taxes than using property taxes.” The latter, the mayor wryly acknowledged, is something the new owner might not be so thrilled about.

The district’s alderman Terry Witkowski was also on hand, whom the mayor praised as a “a very consistent and persistent advocate for the city moving this property.” Witkowski returned the favor, noting that Milwaukee “has become a model for what to do with [foreclosed properties], thanks to the leadership of Mayor Barrett.” Witkowski, speaking with a bit of hyperbole, declared the building “has been vacant probably 20 years” and boarded up for at least 10 of those years (city records indicate it was vacant by about 2009).

The 12-year council veteran noted that as long as he’s been in office people have complained about the property at neighborhood meetings, but the city’s hands were tied. The former owner, Henry Nunnemacher, continued to pay the taxes, even as the city tacked on additional charges for having to mow the grass or shovel snow. Finally, it became tax delinquent and the city was able to step in and issue a request-for-proposals for a new owner. 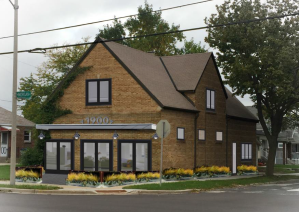 Quinn has grand plans for the 2,457 square-foot building. She’ll convert the first-floor of the building into a studio space for her design work, but also intends to carve out space for non-profits to meet. She also plans to move into the second-floor apartment, of which little remains. In a bold statement that may have given her contracting team a jolt, Quinn announced she’ll have the space open in nine months, but is “ambitiously hoping for four or five months.” Who’s in charge of delivering on such an aggressive timeline? Todd Fugh of Innovative Remodeling & Restoration.

Besides all her planned renovations, Quinn has her work cut out. The building currently does not have power and also has a one-inch deep lake in the basement. A tour of the building with the new owner showed the structure is in good shape, but a 2012 complaint to the Department of Neighborhood Services doesn’t beat around the bush with the amount of cleanup needed, not to mention “rodents seen entering this building and in the area.”

Quinn purchased the building for $20,000 from the city and will receive a $65,000 grant from the city’s commercial foreclosed property renovation fund. Including the city’s grant, she expects the purchase and renovation to cost between $220,000 to $265,000.

You might be scratching your head at this point, wondering why she choose this building. “I live right down the street,” Quinn proclaimed at the press conference. If you want to see that blighted property in the neighborhood improved, there’s no surer way than buying it yourself and getting to work.

When she’s not working on her design business or new building, Quinn will continue to serve as an instructor at Gateway Technical College. 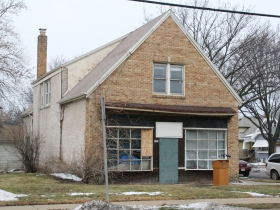 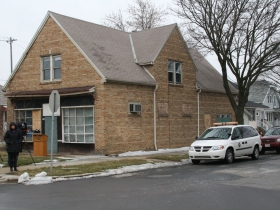 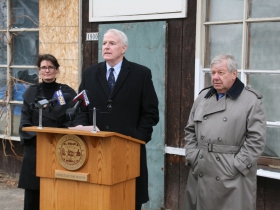 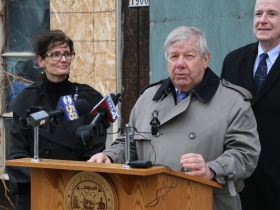 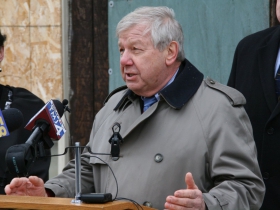 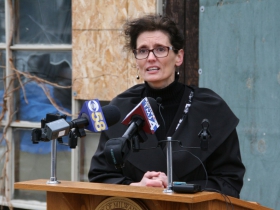 Built in 1929, the building was originally a meat market and grocery store according to city records.

Long-time residents of Milwaukee will remember the building as the home of the LeDoux Leather Company. The company, which opened in Milwaukee in 1929, relocated to the building in 1974. When they moved out, they left behind a curiously leather-adorned ceiling in a second-floor room that also featured newspaper-turned-wallpaper from a 1929 copy of Chicago’s Herald Examiner. The firm is still around, but has decamped to Muskego. Today they’re producing leather goods targeted at motorcycle riders, “re-enactment enthusiasts,” and game hunters.

If you’re in the market for real estate, be it a single-family home or an old fire station, the city has a large directory of properties available for sale. And who knows, maybe the mayor will show up to hand you the key to your new home.

5 thoughts on “Eyes on Milwaukee: City Sells Another Foreclosed Home”