By Allison Dikanovic, Milwaukee Neighborhood News Service - Mar 2nd, 2016 10:39 am
Get a daily rundown of the top stories on Urban Milwaukee 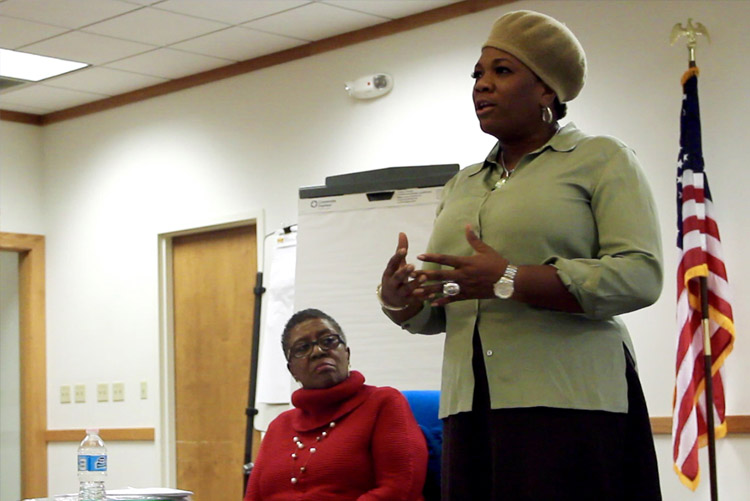 Conversation flowed effortlessly around the circle at a women’s support group meeting one Tuesday nine years ago at the Benedict Center. Then a young woman who usually kept to herself let out a barely audible whisper. All eyes turned to 21-year-old Laura Johnson as she gained momentum from her story. Her voice rose, eyes widened and hands moved as quickly as the words escaping her mouth.

Johnson said she had been an introverted teenager who enjoyed reading romance novels on her porch on North Avenue in Milwaukee. Unlike the characters in her books, the man she fell in love with sold her for sex all over the Midwest from the time she turned 14 until she was 17.

As her toddler son crawled around the middle of the circle, she said that she had given birth to another son years before, but the man who had taken her away took her firstborn from her. He sent the baby back to Milwaukee to be placed in the foster care system. After she escaped and found her way back home, Johnson said there was nowhere for her to go and no support to help her cope with what she had experienced.

“There was nothing here for me,” Johnson said. “At that point I almost felt like I should have just stayed with him.”

When she couldn’t get her son back or receive any services, Johnson said she lost trust in the system and went back to a life of prostitution and drugs to survive.

Across the room, Martha Love was on the edge of her seat. After recently hearing about a group of eight middle-school-aged girls in Milwaukee who were trafficked in the commercial sex trade during the school day and then brought home at night to their parents, she said she knew the problem was bigger than she ever imagined.

Love recruited her friend Dana World-Patterson, and the two decided to take action.

“It was so appalling that we started researching about resources for trafficked youth,” Love said.

There weren’t many available, so in 2008, they decided to start the Human Trafficking Task Force of Greater Milwaukee. The two women sought to educate people about the problem plaguing the community’s children and to search for solutions. The task force originated as a function of Milwaukee County but now operates through the City of Milwaukee.

“There was no name for it, no identification for girls like me,” Johnson said.

One of the task force’s primary goals is to make the Milwaukee community aware of what trafficking is. Experts say that the term “human trafficking” does not always resonate with youth or women who have been trafficked, but it is important for its legal and punitive implications.

The federal Victims of Trafficking and Violence Prevention Act defines trafficking as any situation “in which a commercial sex act is induced by force, fraud, or coercion, or in which the person induced to perform such act has not attained 18 years of age.”

Both Love and World-Patterson agree that giving trafficking a name has been an essential step in combating it. “Human trafficking is now a word in our community,” Love said.

There are many faces of trafficking, they say, and that needs to be taken into account when figuring out how to best address the problem.

Claudine O’Leary, a trafficking survivor, victim advocate and one of the original five members of the task force, works with youth who have been affected by the commercial sex trade.

O’Leary said societal structures and vulnerabilities such as poverty, inequality, homelessness or involvement in the juvenile justice system can make youth more at risk of being trafficked.

“It’s incredibly important that we don’t diminish the structural inequality,” she said. “Structurally we have not dealt with the economic inequality in our city.”

She said that many of the youth she works with have experienced informal sexual exchanges in times of desperation, trading sexual services for shelter, money or food to help them survive. This “survival sex” is included in the technical definition of trafficking even if there is no pimp. According to O’Leary, it is very common in Milwaukee.

O’Leary and other experts said that the experiences of victims and survivors, especially youth, need to be taken into account. “It’s important to hold onto multiple stories at the same time,” O’Leary said, referring to how the task force responds to the problem.

The task force has created marketing campaigns, presented at neighborhood associations, schools and churches, and trained law enforcement and care providers about what to look for in someone being exploited in the commercial sex trade.

High school students and young adults cannot take their gaze off the women speaking at the Body and Soul Healing Arts Center in Sherman Park. Ni’Sea Thurman-Wamubu, 15, furiously takes notes and photos, so enthralled that she can’t switch from pen to camera fast enough.

World-Patterson, speaking on a panel alongside Love and other community activists including Donna Hietpas from the Benedict Center, Chandra Cooper from Grateful Girls Safe Haven and LaShawndra Vernon from United Way of Greater Milwaukee, asks a question that is received with silence.

“How many of you know someone who has been trafficked?”

Not one hand goes up. However, when she starts to ask more specific questions such as, “Do you know someone who didn’t really have a choice to not have sex?” or “Do you know someone who has ever sold their bodies in any way?” heads begin to nod sporadically. The advocates discuss what the commercial sex trade, often referred to as “the game,” looks like in many Milwaukee neighborhoods, and how youth can have those conversations with their peers.

“There is an image of what traffickers used to look like, and we’re not always seeing that,” Love said.

Johnson’s trafficker was a familiar face in the neighborhood, a smooth talker with big rims on his car. Her mother knew him, and Johnson had dated him for eight months before he began selling her for sex.

Local advocates say the Internet has contributed significantly to this exploitation, facilitating exchanges through sites such as Craigslist or Backpage, and giving traffickers and johns another avenue to build coercive relationships with youth. O’Leary said that the youth she works with say that their primary involvement with sex trafficking is not on the street, but online through different social networks.

“In the task force, we talk about every single thing that contributes to human trafficking. Everything is put on the table,” Love said.