Where City’s Crime is Rising

The biggest hike is in Ald. Donovan’s district. No wonder that’s his major issue. 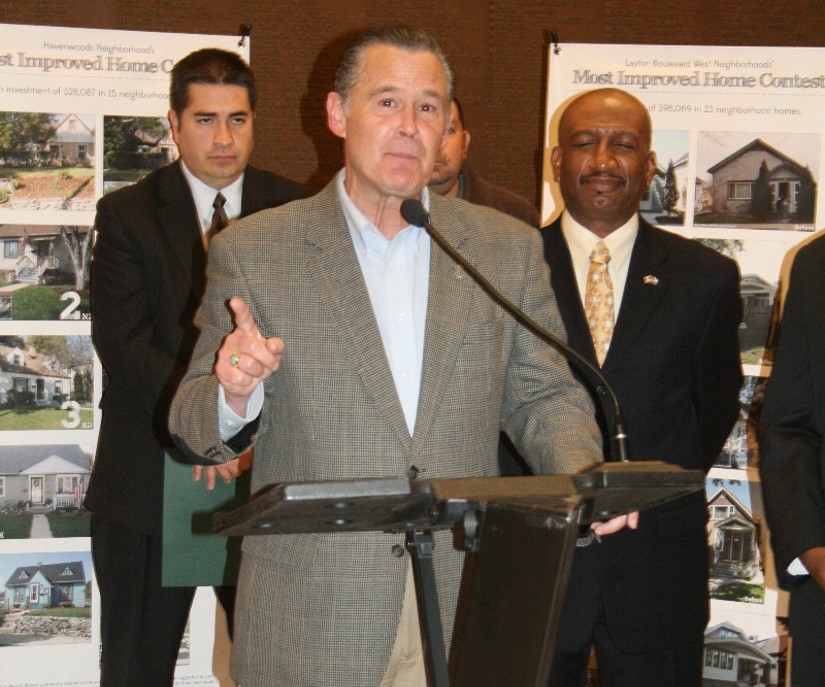 In recent years, alderman and mayoral candidate Bob Donovan has been like a broken record, issuing press release after press release blasting Mayor Tom Barrett for being soft — or something — on crime.

A typical broadside, issued by Donovan on July 28, 2015: “In my 15 years of service on the Common Council, I have never seen such a high level of fear and frustration in my constituents and others in the community. The level of violence and disorder, and the lowering quality of life across Milwaukee has people wondering when things will start to improve, if ever…We’ve created our own perfect storm, haven’t we Mr. Mayor?!”

You can’t blame Donovan for complaining. Because the fact is, no other alderman has seen as big an increase in his/her district has Donovan has over the last three years. Indeed, if crime was rising as much in every aldermanic district, Barrett would be dead meat.

And those auto thefts Donovan has been screaming about? They rose in his district by 89 percent in 2015 compared to the prior year and by 151 percent compared to 2013! One can certainly imagine he is hearing complaints from constituents.

It’s important to note that Donovan’s district, despite the recent increases, still has far less crime than in many other parts of town. In 2015, seven other districts had more overall crime and violent crime than his district.

The highest-crime aldermanic district is the 15th, represented by Ald. Russell Stamper II, and mostly located between 7th and 43rd streets, between Vliet and Locust. His high-poverty district averaged more than 3,300 crimes per year, including about 1,200 violent crimes. By contrast, Donovan’s district, mostly between the Menomonee Valley and Cleveland Ave and between 20th and 40th streets, averaged about 1,900 crimes per year, including about 425 violent crimes.

Still the changes in Donovan’s district exemplify the problems that have arisen in the last two years, as crime has begun to rise in Milwaukee after years of decline. The police department’s statistics show overall crime declined by 26 percent and violent crime by 11 percent from 2007-2013; but that began to change in 2014, as overall crime rose by three percent and violent crime rose by eight percent. (Final city-wide statistics for 2015 have not yet been released by the department.)

While property crime rose only one percent in 2014, auto thefts rose by 51 percent. There were big spikes in this crime in either 2014 or 2015 (or both years) in many aldermanic districts. That includes the 11th district represented by Ald. Mark Borkowski on the southwest side, which has the lowest crime rate in the city, but which has seen auto thefts rise in 2015 by 45 percent compared to 2014 and by 117 percent compared to 2013. Borkowski caused a huge furor after a statement defending illegal anal cavity searches of suspects, but he was also expressing frustration about limits on the police pursuit of auto thieves.

For decades, America’s police engaged in high-speed chases, even of minor offenders, and the result was the killing of thousands of innocent bystanders and passengers, records going back to 1979 show. The U.S. Department of Justice called pursuits “the most dangerous of all ordinary police activities” in 1990 and urged police departments to adopt policies specifying when officers can and cannot pursue someone.

Milwaukee Police Chief Ed Flynn, who believes in aggressive, proactive policing, nonetheless changed his pursuit policy in 2010 after five innocent people were killed during police chases.  Donovan has claimed the new policy allows criminals to “thumb their noses” at the police, a sentiment Borkowski seems to share, while Flynn has emphasized the policy is intended to discourage the pursuit of minor offenders. 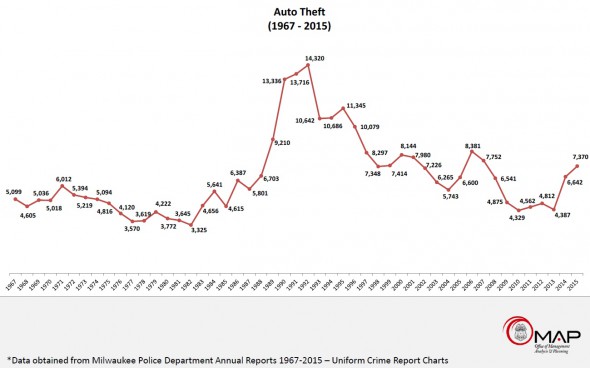 The reality is that auto thefts, historically, were far higher back when there were no constraints on police pursuits. As the accompanying graph shows, annual auto thefts in the city peaked at 14,320 in 1992 and from there dropped all the way to 5,743 in 2004. They were at 7,752 when Flynn took over, dropped to 4,329 in 2010, the year he changed the pursuit policy, and stayed at that historic low for three more years, before jumping to significantly higher totals in 2014 and 2015.

These statistics strongly suggest auto thefts rise and fall for reasons that have nothing to do with police pursuit policies. That said, it appears the reins have been loosened in Milwaukee somewhat of late: as I’ve previously reported, the city’s police did 263 vehicle pursuits last year, at least five times more than in 2011 and 2012 (about 50 pursuits each year).

Milwaukee is among a number of big cities that have seen increases in violent crime, particularly murder, in the last year or two, as the New York Times has reported. Still, “the overall violent crime rate — remains far below the peaks of the late 1980s and early ’90s,” the newspaper noted. And crime in Milwaukee is still down overall on Flynn’s watch.

But that’s hardly a comfort if you’re living in Donovan’s district, where crime had clearly had a big upswing. Donovan has been short on solutions: as I’ve reported, he’s regularly voted against city budget bills that paid for an increase in the number of police officers in Milwaukee, even as he has called over and over for more police. But however contradictory Donovan’s policies, the statistics in his district certainly dramatize his major — if not only — issue in the mayoral campaign.

18 thoughts on “Murphy’s Law: Where City’s Crime is Rising”