Mostly seafood served, the menu all in Spanish and gringos are rare. But good food. 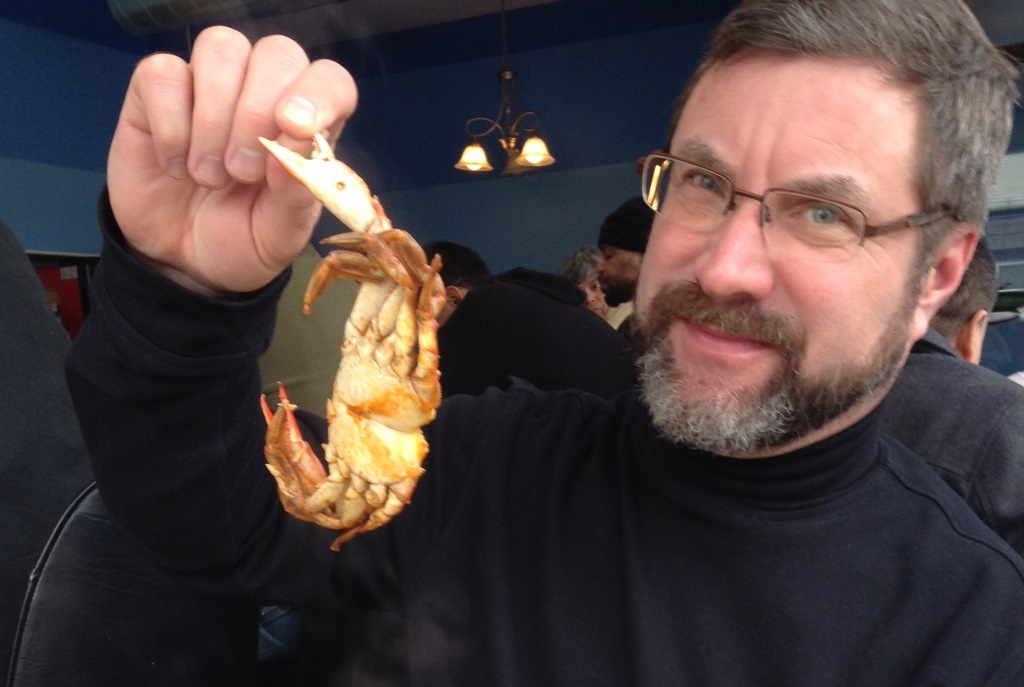 Trying the 4-Mares Caldo at Tsunami. Photo by Cari Taylor-Carlson.

The restaurant at the corner of 20th and Lincoln, formerly one of my favorite “hole in the wall” joints that called itself EAT, has a new owner and a new name, Tsunami. A restaurant isn’t exactly what comes to mind when one hears a word that brings up visions of earthquakes, floods, and general devastation. Most people don’t picture delicious south-of-the-border cuisine that features almost exclusively foods from the sea. The owner, inspired by the Japanese word for “big wave,” chose Tsunami to represent the heart of his cuisine. Not an obvious connection, but once explained, it makes sense.

In just four months Tsunami has been discovered by the local Hispanic community. Because it’s tiny, just three tables for four and a counter that seats a dozen, it can get crowded on weekends and at lunchtime. Floor-to-ceiling windows that face Lincoln Ave. make the restaurant seem bigger; as one of my companions commented, “the windows give a sense of space that keep it from feeling claustrophobic.” While we sat at lunch, four police cars with sirens blaring sped past on Lincoln to remind us that we are indeed, in the city.

The new owner basically changed very little in the place. He left the open stove and grill behind the counter, painted the back wall three shades of blue, and replaced the chairs. This gave Tsunami a clean updated look, a considerable improvement over the former EAT. Tsunami has a certain charm which was enhanced by buskers, three Mexican musicians who came in from the street to serenade us with a series of ranchero songs before they passed the hat, or in this case, a sombrero. Even the chef working the grill joined the musicians who belted their heartfelt songs, stopping conversation while adding a cheery note to our Saturday lunch.

The menu, nothing like the usual Tex-Mex tacos and burritos found at many Walker’s Point restaurants, lists an intriguing variety of seafood alongside a few familiar Mexican dishes. An English-Spanish dictionary or a smart phone would be useful for decoding the menu which is entirely in Spanish. This came to mind when my friend asked, “What is that ‘D’ word?”

“That would be desayuno or breakfast,” I replied. To add to the language challenge, our server spoke only Spanish. And no surprise, we were the only gringos in the restaurant.

As soon as we sat down, our server delivered a basket of chips with three salsa choices, seriously hot chipotle-flavored, a tomato-based nondescript, and a surprising third, a small delicious portion of cerviche. 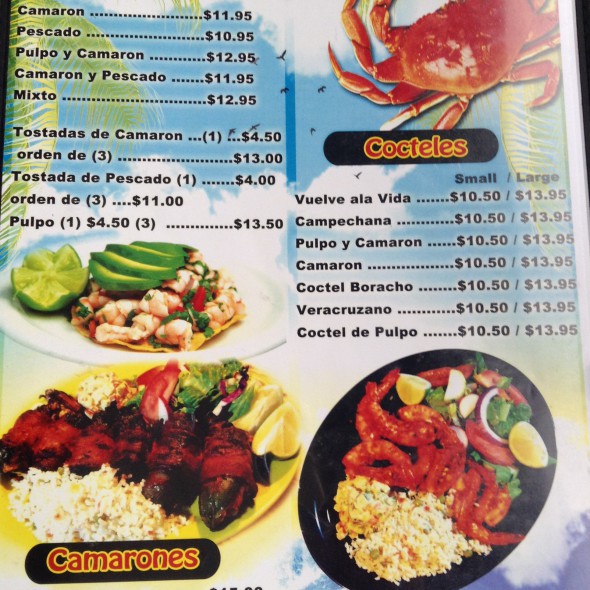 From the extensive menu, two of us ordered Caldo thinking it was the same as Sopa, or soup. It wasn’t. Caldo means broth and that’s what we got. My Caldo Camaron, a large bowl of seafood-based broth, was stuffed with shrimp. It came boiling hot which forced me to wait until I could dive for the shrimp still in their shells. Because they were cooked quickly in the broth with their shells on, they didn’t dry out and get tough. They were large, succulent, flavored by the broth, or possibly the other way around?  There were at least 15 shrimp in that bowl.

The 4-Mares Caldo, a bowl filled to overflowing with shrimp, whole baby crabs, octopus, and chunks of fish attached to the bone sounded amazing, but actually eating that seafood turned out to be problematic. We treated most of it as finger-food. The fish separated from the bones with no problem; the octopus tasted of the sea; the large shrimp, just like mine, were delicious; the baby crabs, a challenge to eat, barely worth the effort to extract the tiny bites. Overall, not a dish any of us would order again.

In both Caldos, deep complex flavors in the seafood-based broth suggested many hours on the stove. There was enough heat to call the Caldos spicy, but not enough to overwhelm the individual flavors of the seafood.

Our third entrée, Filetes a la Plancha or grilled fish filet, was the one I would order with no caveats. A large boneless piece of perfectly seasoned fish came straight from the grill on a platter with rice, potato salad, and a small green salad. Other choices on the filetes menu included seafood a la Diabla, (hot), al mojo de Ajo (with garlic), a la Veracruzana (with tomatoes, capers, and olives), Empanizados (breaded with chipotle aioli sauce), and Empapelado (baked in foil with onion, tomato, and celery).

I’m not sure why the menu lists Horchata under Aguas, or water, but that’s what we ordered to drink. It perfectly complemented the spicy food. Made from pulverized rice that’s been soaked, blended, and strained, it’s a creamy mix of rice milk, sugar, and cinnamon, dessert in a glass.

On a follow-up visit, I stayed with the part of the menu I could translate and ordered two Tostadas de Pescado — basically cerviche on crisp corn tortillas. My companion strayed from the seafood on the menu and ordered instead from the Platillos or plates. Her fork-tender breaded chicken, Milanesa Pollo, had been pounded to half-inch thickness and deep fried. The fries on her plate also had a seasoned coating almost as if they had been beer-battered. A serving of rice contained pieces of carrots and celery plus peas and corn making an interesting side dish to complement the chicken and the fries. Refried pinto beans and a green salad completed her Platillo.

My cerviche, a generous serving of chopped fish cooked in lime came with slices of avocado, a light dressing, and cilantro. The buttery avocado cut the tart lime, a necessary addition to the dish. I would order this again with the addition of sides, rice and beans.

Two Postres, or desserts tempted us, but full plates of food and large glasses of Horchata left no choice but to pass. That’s not easy when it’s a choice between Flan and Tres Leches or three milk cake.

We finished lunch and waited and waited for the bill. Of course we did. Just like in Mexico, our server needed us to ask, “La Cuenta por favor.”

Tsunami has no website, doesn’t list its menu on Facebook and you’ll find little or no information about it on Yelp or Trip Advisor. (So our “Rundown” information is scanty.) But it’s a hit with local Latinos. 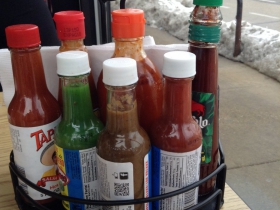 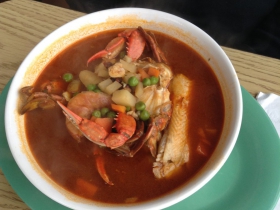 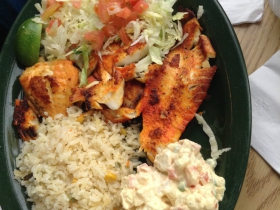 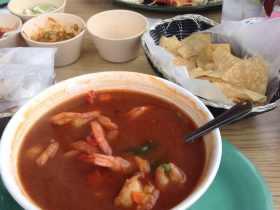 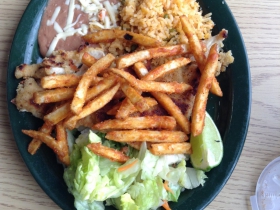 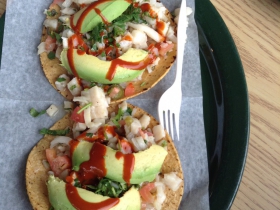 One thought on “Dining: Tsunami Is Genuinely Mexican”