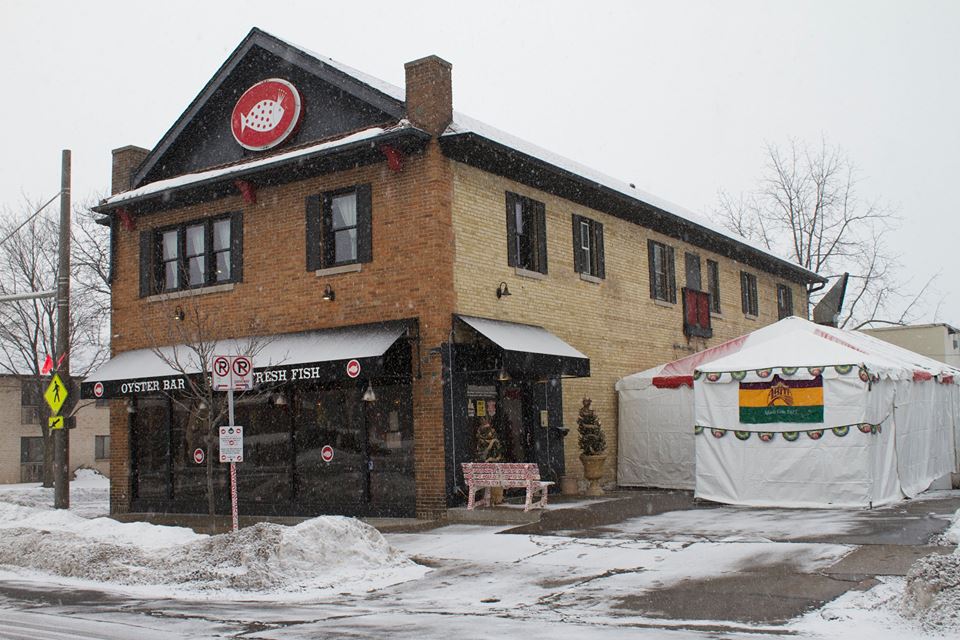 Milwaukee is about 1,000 miles from New Orleans, the home of creole cooking, one of the only original American cuisines. Lucky for us, we only have to travel about 5 miles from downtown to enjoy some of the best of this Southern fare at Maxie’s (6732 W. Fairview Ave.). This West Side institution, just north of I-94 off 68th Street, was the first place in the Black Shoe Hospitality group (Maxie’s-Blue’s Egg-Story Hill BKC) and has been a go-to restaurant for my family since it opened in 2007. Of all the places featured in this column, I’ve been to Maxie’s the most.

When it comes to Mardi Gras celebrations, there’s no place in Milwaukee quite like Maxie’s. Last year it was packed wall-to-wall on both floors, with a lengthy wait for a table and a heated-tent adjacent to the building brimming with people, live music, discounted drinks, and delicious food. The two-day affair also includes Lundi Gras, which starts today at 4 p.m. When I stopped in last week Maxie’s was already adorned with decorations. You’re welcome to bring your own beads and masks to the party, but they’ll have plenty.

Outside of their excellent Mardi Gras bash, Maxie’s has an excellent happy hour that happens to be my personal favorite. The main reason is the $1 fresh shucked oysters. Chock full of zinc, protein, vitamin C, antioxidants, and omega-3 fatty acids, these little sea clams make for a fantastic appetizer and an invigorating aphrodisiac. During happy hour (4 p.m. to 6 p.m., 7 days a week) oysters are $1 if ordered by the half-dozen, with any odd numbers priced at market value. Happy hour also features select $6 starters and all drinks are $1 off.

My beverage of choice at Maxie’s is their Cajun Bloody Mary, which isn’t on the menu but is one of the best in town. It includes house spices and hot sauce, and is topped with an olive, andouille sausage, shrimp, and pickled okra. Their tap beers are a mix of Midwest and Southern brewing. Maxie’s is the first place in town where I had Kentucky Bourbon Barrel Ale on tap and they always have at least one from Louisiana’s Abita Brewing Company. It’s one of the few places that offers 16oz and 22oz pours. They also have 17 bottles of cider/beer, 20 white and sparkling wine bottles (9 by the glass), 28 red wine bottles (9 by the glass), with their house red/wine only $5.75 a glass.

Down South folks are known more for their cocktail consumption than beer and wine appreciation, and Maxie’s has a bunch of favorites: Mint Julep, Kentucky Sidecar, N’Awlins Sazerac, Hurricane, Vieux Carre, plus an original, their Jalapeño Margarita (house infused sauza tequila, triple sec, lime, and bar sour). Maxie’s combines my two favorite menu items, the bloody mary and the oyster, in their oyster shooter ($4.50). Bourbon is the spirit of choice in the South and Maxie’s has over 60 of the finest varieties, plus more than 30 rye whiskeys and others.

In addition to their fantastic weeklong happy hour, they have five weekly specials. Monday is NOLA night with $3 Abita beers, $4 Hurricanes and Mojitos and New Orleans-style grilled oysters ($18/dozen). Then comes Chicken Fried Tuesday with $11.95 fried chicken dinner, half-priced wings, and $2 PBR tallboys. On Vino Vendsday you get $10 off any bottle of wine. Rack ‘n’ Mac Thursdays are my personal favorite; each week has a new specialty mac n cheese, you can add a quarter or half rack of their famous pork ribs to any dish, and rotating Milwaukee Beer Co. beers are $3. Bring the kids for Family Night on Sunday and enjoy $1 kids meals for children 12 and under accompanied by an adult.

Since Lundi and Mardi Gras are such a big deal at Maxie’s, there’s no happy hour or weekly specials today or tomorrow. They will have $4 Abita beers, $5 Hurricanes, and lots of special menu items including Truffle, Herb and Parmesan Fries, Shrimp Po’boy with Cajun mayo and rough-cut fries, Blackened Grouper with dirty rice and muddy waters, the house-made sausage trio of spicy cheese hot link, chicken andouille, and seafood boudin, and Crawfish Étoufée. Maxie’s traditional menu is already marvelous, inspired by the “Low Country” cooking of the Carolinas, Creole and Cajun cooking of Louisiana, traditional slow-smoked Southern barbeque, and Southern comfort food of all kinds. You can’t miss with the shrimp and grits, the meats, even the salads are fantastic. Last week I had an incredible stuffed portabello with prosciutto, crab, white bean and parmesan stuffing on top of grits with sauce bearnaise. 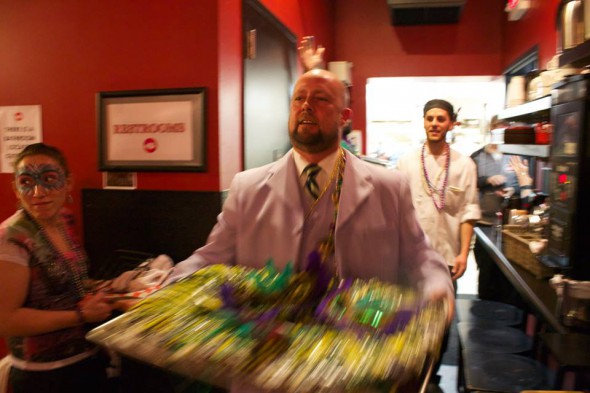 Returning to the Maxie’s Mardi Gras party is the Extra Crispy Brass Band and Dead Man’s Carnival. They’ll be performing in the restaurant between 5:30 p.m. and 9 p.m. today and in the tent tomorrow (the tent is only open for Mardi Gras). Singer/songwriter Jesse Voelker will also perform on Mardi Gras. They’ll have Abita Mardi Gras Bock and Abita Turbodog on tap, plus the Voodoo American Stout, the perfect Mardi Gras dark beer in my book. Maxie’s opens early at 2 p.m. On Tuesday there will also be King Cake, a large cake that has a tiny plastic baby hidden inside. Rumor has it whoever finds the baby is bestowed with good fortune. If you have the good fortune of attending Lundi or Mardi Gras at Maxie’s, or 88Nine Radio Milwaukee’s “Sound Bites” event on Thursday at the Iron Horse Hotel, you’ll be sure to have a memorable week. 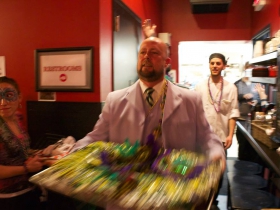 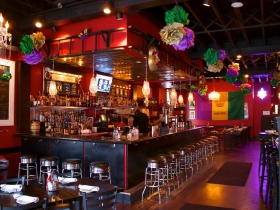 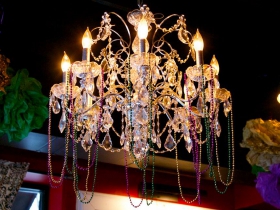 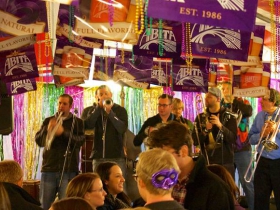 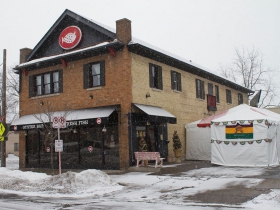 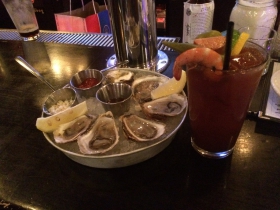