The Sweet Hospitality of Swig 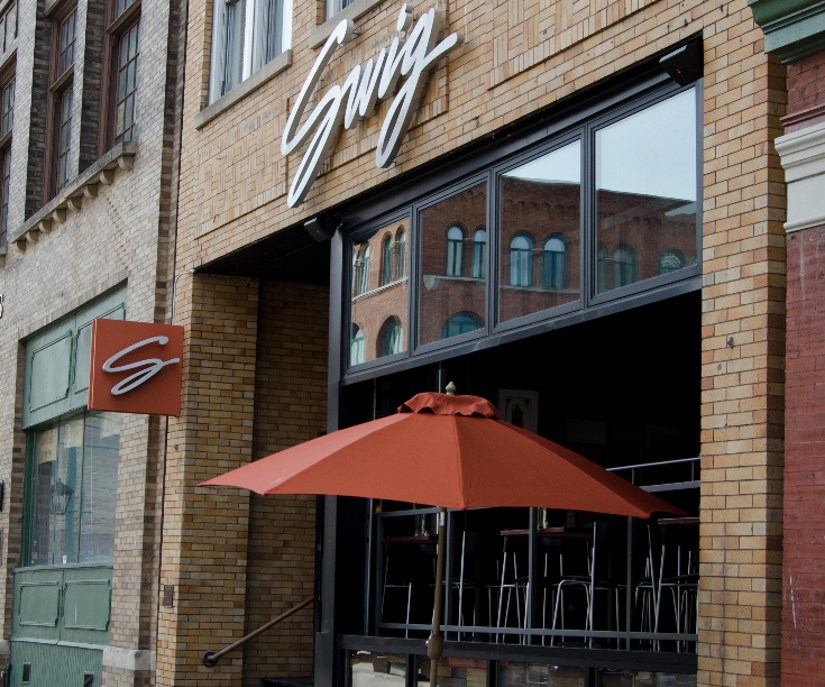 From now on when I dine at Swig, at least one dessert will be a given. They’re not listed on the menu but the servers are well informed and willing to describe in precise detail the intricacies of each. On three recent visits with friends I sampled three desserts: coffee flavored Panna Cotta, Peanut Butter Cheesecake, and Salted Caramel Torte.

They are rich and filling. I recommend one dessert, two spoons, one for me and one for your companion. The torte started with an ultra-thin layer of vanilla sponge cake underneath a dense caramel crème. More sponge cake topped the caramel followed by what we thought was chocolate mousse. Instead, our server said, “It’s whipped chocolate ganache. That way it’s a little thicker and stands up better.” The pink Himalayan salt sprinkled on the ganache added just enough contrast and crunch to intensify the flavors of the torte.

The Panna Cotta, less showy but equally delicious, had creamy layers of vanilla and coffee-flavored chocolate. “If you like coffee, you’ll love it,” our server said.

The Peanut Butter Cheesecake with its fudge-like filling was topped with sliced bananas and flame-seared marshmallows. We found it more like a giant piece of fudge than a cheesecake. With regret, we left half on the plate.

These desserts come from Holey Moley, a craft doughnut shop and bakery in the Third Ward, part of Hospitality Democracy, a group of local restaurants owned by Joe and Angie Sorge. Other restaurants in the Hospitality group include Smoke Shack, Water Buffalo, A.J. Bombers in Milwaukee and Madison, and next door to Swig, the Italian-themed Onesto. Swig has the honor of being the first in the group dating back to its brief life as a bar on Water Street. It didn’t take Joe and Angie Sorge long to figure out that when people drink they also like to have some food. Swig moved to its current location 10 years ago and began serving small plates.

In addition to desserts, the staff at Holey Moley makes the bread served at Hospitality’s restaurants. At Swig there’s a small charge for this loaf of freshly baked bread that easily serves two or three customers.

I mention this charge because I have a friend who calls herself Nancy Banana. She fills her purse with dollar bills and passes them out to diners who are fortunate enough to sit nearby. “This is to pay for your bread,” she says as she deposits a dollar plus a quarter for tax and tip on each table.

Since Swig is barely more than a block from the theaters on Broadway, it’s a popular place for pre-theater dining. That’s what takes Nancy Banana and I to Swig before evening performances at the Skylight. We always order the same thing, Greens Salad for Nancy and Seared Scallop Salad for me, and of course, dessert. The mixed greens, always fresh and attractive, may be dressed with red pepper vinaigrette, raspberry vinaigrette, or my favorite, champagne basil. When I commented to our server how fresh it tasted she said, “Would you like the recipe?” Five minutes later she returned with it hand-written on a scrap of paper.

It’s that sort of place, with excellent service and for the most part, no food bombs. When I ordered the Herbed Grilled Cheese Sandwich, swiss, brie. sage and thyme on house-made sourdough, my server suggested I add bacon. She nailed it. The oozy brie needed that salty crunch to give it backbone.

From the Small Plates I found Seared Scallops on Curry Parsnip Puree just as tender as the scallops which I’ve enjoyed many times on the salad. Anyone wary of curry need not worry; the puree was mild and barely hinted of that occasionally hot Indian spice. Paired with the root vegetable and a few dried cranberries, the scallops made a delicious lunch and left enough appetite for that Caramel Torte.

Only the Roasted Squash Salad fell into the “I would never order it again” category. A large mass of kale topped with smears of gorgonzola hid a few pecans, five dried cherries and three garlic chips. It needed more of everything except kale, especially the crisp garlic chips. The alleged star of the salad, the roasted squash, was totally devoid of flavor. Only the extra apricot vinaigrette which I requested livened the kale and made the squash slightly more interesting.

A cheery gas fire and people watching on Broadway makes the small upper level of Swig a good place to while away an hour or two. The restaurant is cozy contemporary with lots of wood, a cream city brick wall, and high ceilings. A center bar separates three areas, the upper level, the bar itself, and the long narrow part of the restaurant with bistro tables behind the bar.

It’s not necessary to spend a lot of money at Swig. With the exception of Grilled Filet, $26.50, the entrees and small plates come in under $20.00. Vegetarians, people who are gluten-free, and anyone with a nut allergy will appreciate the appropriate notations on the menu.

The rest of us can order freely without mortgaging the house and finish with one of those yummy desserts. As for that salad dressing recipe, here it is: 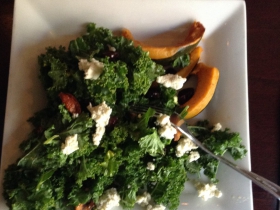 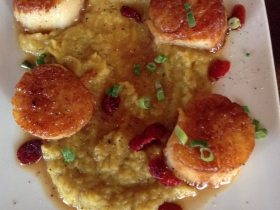 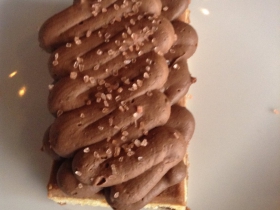 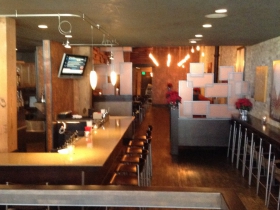 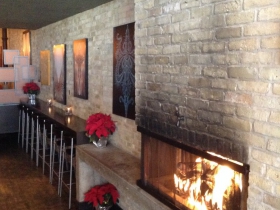 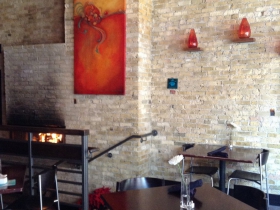 One thought on “Dining: The Sweet Hospitality of Swig”