The Myth of Democratic Gerrymandering

They all did it in Wisconsin, Republicans declare. Just ask Christian Schneider. 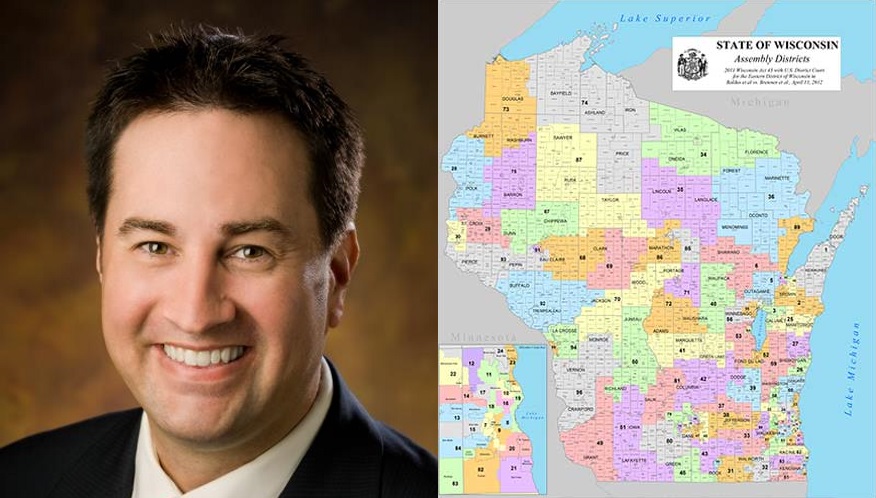 When the Republicans need someone to spin the electorate, there is never anyone better for the job than Christian Schneider, the Milwaukee Journal Sentinel’s only regular political columnist. Schneider, after all, has spent most of his career as a party operative, including years as a Republican legislative aide and running GOP campaigns, followed by six years as a senior fellow with conservative Wisconsin Policy Research Institute (WPRI). He became a part-time staffer at the newspaper in 2013, while he continued to contribute to the WPRI and the National Review and that arrangement has continued since.

After the gerrymandering of political districts overseen by Republicans in 2012, Schneider rose to their defense with an August 2013 column peddling the theory that this was no different or more partisan than past efforts when Democrats held power. To buttress his claim, he pointed to the an action taken by Democratic Gov. Tony Earl, elected in 1982, who worked with Democratic legislators to change districting boundaries set by a federal court in 1982. “As was the case just last year, one party got to set legislative boundaries to their political advantage, to ensure partisan majorities,” Schnieder wrote.

This defense — the Nixonian “they all do it” — has now become Republican dogma, and the Earl story was repeated by Wisconsin Conservative Digest founder Bob Dohnal, in comments after this column.

But we now have exact data measuring the partisan advantage achieved in Wisconsin and in states across the country, courtesy of a suit filed in U.S. District Court. As I’ve reported, the suit includes data crunched by expert professors measuring the impact of state reapportionments since the U.S. Supreme Court’s “one-man one vote” rulings of the 1960s forever changed how this is done.

University of Chicago Professor of Law Nicholas Stephanopolous, and Eric McGhee, a research fellow at the Public Policy Institute of Chicago, devised an “efficiency gap,” which measures the ratio of each party’s wasted votes to all votes cast.

Prof. Simon Jackman of Stanford University then did a historic analysis which measured the efficiency gap for each party in 786 state legislative elections in 41 states from 1972-2014. (Nine states with incomplete data were not included.)

And looking at Wisconsin’s Republican efficiency gap advantage of 13 percent in 2012 and 10 percent in 2014, he concluded that in “the entire set of 786 state legislative elections” no other two-election sequence after redistricting achieved this big an advantage for either party. The gerrymandering in Wisconsin is “virtually without historical precedent,” he concluded.

As for the idea that Wisconsin’s Republicans are only doing what Democrats before them did, that couldn’t be more untrue. The state’s highest Democratic efficiency gap since 1972 was just 2 percent in 1994, Jackman found. The current Republican advantage is at least five times larger. (And even if Democrats had ever gained such an advantage, the reason for reform is to make sure that all voters, regardless of party, have their votes count equally.)

But what about that egregious redistricting by Gov. Earl? Stephanopolous reviewed the data for me and found that the Republicans had a 3.8 percent efficiency gap in 1982 and after the relatively minor changes made by Earl and the Democrats, that changed to a 2.4 percent GOP advantage in 1984. Throughout the 1980s, the Democrats never had an efficiency gap advantage.

But Schneider’s claim becomes all the more hollow when you consider a initial ruling by a three-judge federal court, of which two judges were appointed by Republican presidents, in response to a suit against the Republicans’ redistricting in Wisconsin. The ruling noted that historical data suggests “there is close to a zero percent chance that the current (Wisconsin) plan’s efficiency gap will ever favor the Democrats during the remainder of the decade.”

That stands in start contrast to advantages realized in the past even by clearly partisan redistricting in various states over the last 42 years. As Jackman found, the edge achieved by one party often changed and declined over the decade as people move and other population changes occur within districts. But Wisconsin’s current Republican advantage is simply too huge for that to happen, the judges noted.

Nor was it a coincidence that Wisconsin’s efficiency gap was so huge, the court found. The ruling noted that Republicans hired Ronald Keith Gaddie, a political science professor at the University of Oklahoma, to help with the redistricting: “Gaddie’s model forecast that the Assembly plan would have a pro-Republican ‘efficiency gap’ of 12 percent.”

Gaddie, it appears, used the efficiency gap analysis, which had been created to reform redistricting to instead assure a massive partisan advantage. All of which may be taken into account in the federal court’s ultimate ruling (and however it rules the other side will likely appeal; this dispute could go all the way to the U.S. Supreme Court.)

Republican insiders had to know about Gaddie’s role; he has done work for the conservative American Enterprise Institute and his involvement here was reported by Wispolitics.com. And a liberal blogger called Gaddie “the most influential person” in the redistricting strategy by the Wisconsin GOP.

Considering that Schneider’s entire modus operandi is to repeat talking points and spin from Republican insiders, how is it possible he didn’t know this plan was devised with scientific precision to gain such a huge advantage? Either he knew and didn’t disclose this to readers, or didn’t know and simply plays the patsy for his Republican friends. I’ll leave it to Journal Sentinel readers to decide which is worse.

In his zeal to claim “they all did it,” Schneider ranged back in time to the first half of the 20th century to claim Progressive Republicans also did egregious partisan redistricting. The claim is, for starters, irrelevant, because before the watershed Supreme Court rulings of the 1960s, there was no legal standard for how redistricting should be done.

That said, Schneider managed to slime Robert M. LaFollette as someone who “practiced a vituperative brand of vengeful politics” without offering any specifics and to slam LaFollette’s Progressives for supposedly freezing out Democrats through aggressive redistricting.

The reality is that Democrats were largely irrelevant in the period he was discussing. They lost 31 of 32 elections for governor from 1894 to 1956 and that was a state-wide vote that had nothing to do with redistricting. This was a period where all elections were generally decided in the Republican primary between Progressives and the Republican Stalwarts. The Democrats barely existed in those days and to suggest this was the result of gerrymandering is simply absurd. Either Schneider is clueless about Wisconsin history or simply misleading readers. I’ll leave it to his editors to decide which is worse.

30 thoughts on “Murphy’s Law: The Myth of Democratic Gerrymandering”