“Efficiency model” goes before courts. It has a chance.

The challenge to Wisconsin’s partisan legislative districts recently survived its first hurdle. A three-judge federal panel rejected motions from Wisconsin Attorney General Brad Schimel to throw out the lawsuit on several grounds, including lack of standing on the part of the plaintiffs and the assertion that the US Supreme Court has already rejected their claims.

While the decision itself was largely about process, the three federal judges proved remarkably clear eyed. Schimel argued that Democrats fared poorly because they cluster in cities:

Democratic supporters are concentrated in specific locations such that they naturally are “packed” into districts drawn using ordinary districting principles.

The judges did not buy this argument, instead describing how Republicans set out to gerrymander the legislative districts:

In January 2011, Scott Fitzgerald, Republican member of the Wisconsin State Senate and Senate Majority Leader, and Jeff Fitzgerald, Republican member of the Wisconsin State Assembly and Speaker of the Assembly, hired lawyer Eric McLeod and the law firm of Michael, Best & Friedrich, LLP, to assist with the reapportionment of the state legislative districts after the 2010 Census. The intent of the speaker and majority leader was to design a pro-Republican partisan gerrymander. To accomplish this goal, the firm supervised the work of legislative aides in planning, drafting and negotiating Wisconsin Act 43, which contains the 2012 Assembly districting plan.

The law firm and the aides used past election results to measure the partisanship of the electorate and to design districts that would maximize the number of districts that would elect a Republican and minimize the number of districts that would elect a Democrat. This would be accomplished in two ways, by “cracking” or “packing.” Cracking means dividing a party’s supporters among multiple districts so that they fall short of a majority in each one. Packing means concentrating one party’s backers in a few districts that they win by overwhelming margins. Both cracking and packing result in “wasted” votes, that is, votes cast either for a losing candidate (in the case of cracking) or for a winning candidate but in excess of what he or she needed to prevail (in the case of packing).

The firm and the aides received assistance from Dr. Ronald Keith Gaddie, a professor of political science at the University of Oklahoma. Gaddie created a model that analyzed the expected partisan performance of all of the districts established by Act 43. Gaddie’s model forecast that the Assembly plan would have a pro-Republican “efficiency gap” of 12 percent. The efficiency gap is the difference between the parties’ respective wasted votes in an election, divided by the total number of votes cast.

The judges then go on to describe the secrecy the legislative leaders imposed while the redistricting plan was developed—Republican legislators were allowed to view only the portion that concerned their districts, and Democrats were not allowed to see any of it. Act 43, the law that incorporated the Republican redistricting plan, was passed a week after it was released to the public.

The effectiveness of the cracking and packing strategy is demonstrated by the 2012 election, where Democrats received 51.6 percent of the state-wide Assembly vote, but had a majority in only 39 of the 99 districts. 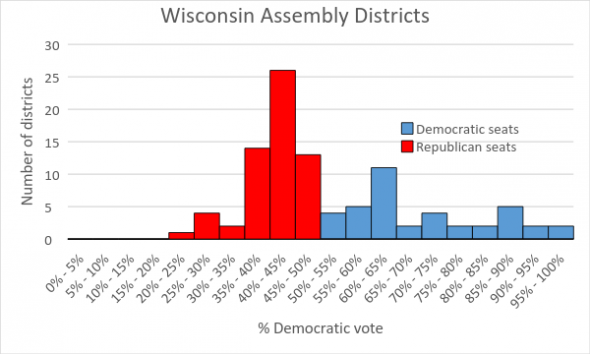 The chart on the right shows the classic signs of the packing and cracking strategy. The red bars show districts with a majority of Republican voters; in blue districts the majority is Democratic. 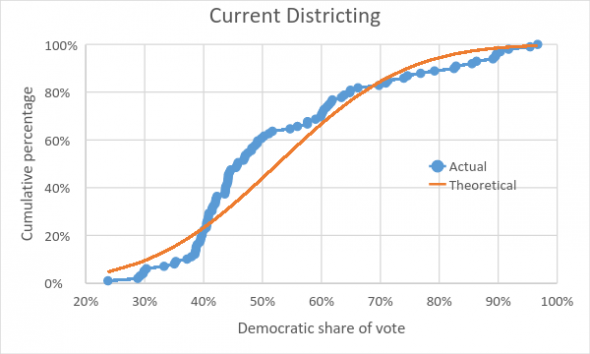 Another way of viewing the same data is through cumulative percentages. The next chart compares the actual distribution of districts (blue dots) compared to a normal cumulative distribution (red line), with the same mean and standard deviation as the actual values. The bulge just short of 50 percent shows districts from which Democrats were removed (cracked) and packed into high Democratic districts, converting these districts from majority Democratic to majority Republican. There are far fewer heavily Republican districts than one might expect and many more heavily Democratic districts. 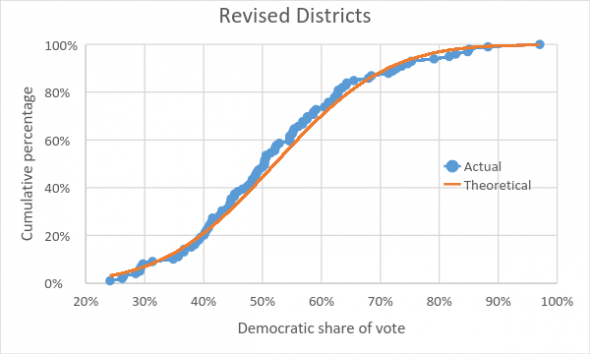 The lawsuit brought against Wisconsin proposes that the courts look at “wasted votes.” This concept was developed by several political scientists who have studied election results.

Under this theory there are two kinds of wasted votes: votes spent on a losing candidate and votes that are more than needed for a candidate to win. It is not possible to get rid of wasted votes; in a race with two candidates half the votes will be wasted. Rather, the theory says that the party with more wasted votes is placed at a competitive disadvantage. This leads to the concept of an “efficiency gap,” defined as the difference between the parties’ respective wasted votes in an election, divided by the total number of votes cast.

While the aim of reformers is to design districts with a small efficiency gap, the aim of the consultant hired by the Republican leadership, the University of Oklahoma professor, was to make it as large as possible. According to the court, his “model forecast that the Assembly plan would have a pro-Republican “efficiency gap” of 12 percent.” It is ironic that a concept developed by political scientists to make elections fairer, was used to lock in one party’s advantage.

Since the aim in developing Act 43 was to inflate the efficiency gap in favor of Republicans, it is to be expected that any alternative plan would reduce the efficiency gap. For example, even when the “fairness” settings on Auto-Redistrict were turned off, the resulting district plan had half the efficiency gap of the current districts in Wisconsin. Districts with Democratic majorities increased from 39 to 47 using Auto Redistrict. While this would still leave Democrats in the minority even after winning a majority of the vote, it would have put them within striking distance of a majority.

Adding in fairness criteria, a new set of districts were generated. While still favoring Republicans the efficiency gap dropped to 2.7 percent with 51 seats with a Democratic majority. Thus almost any change would make the Wisconsin legislature more democratic and more Democratic.

Two of the three members of the panel of judges were appointed by Republican presidents. Despite this, it’s clear that they are not enamored of Act 43:

As the above paragraph makes clear, the efficiency gap can vary somewhat from one year to another, depending on turnout. 2014 was a low-turnout year for Democrats compared to 2012. It is likely that the gap declined because fewer Democratic votes led to fewer wasted Democratic votes in heavily Democratic districts.

Another decision to make is how to handle those heavily skewed districts in which one party does not bother to run a candidate. One solution would be to base the calculation on voter distribution in statewide races, where every vote has the same weight no matter where it is cast. All these issues are solvable if the courts are willing to tackle the gerrymandering problem.

What happens next? Federal law requires that a “district court of three judges shall be convened …  when an action is filed challenging the constitutionality … of the apportionment of any statewide legislative body.” Another section states that “…any party may appeal to the Supreme Court from an order granting or denying, after notice and hearing, an interlocutory or permanent injunction in any civil action, suit or proceeding required by any Act of Congress to be heard and determined by a district court of three judges.” Thus it appears virtually certain that, whatever the three judges decide, the losers will appeal to the Supreme Court.

The Supreme Court has been reluctant to take on gerrymandering cases, in part because of fears that there is not a clear standard of how much gerrymandering is too much. Because of the blatant partisanship of the Wisconsin redistricting, it is hard to imagine any limit upon gerrymandering if the current redistricting plan is upheld. Both parties will be encouraged to maximize gerrymandering when they hold power, and the losers will be the voters — be they Democrat, Republican or independent.