A software programmer devises a way to eliminate political bias. 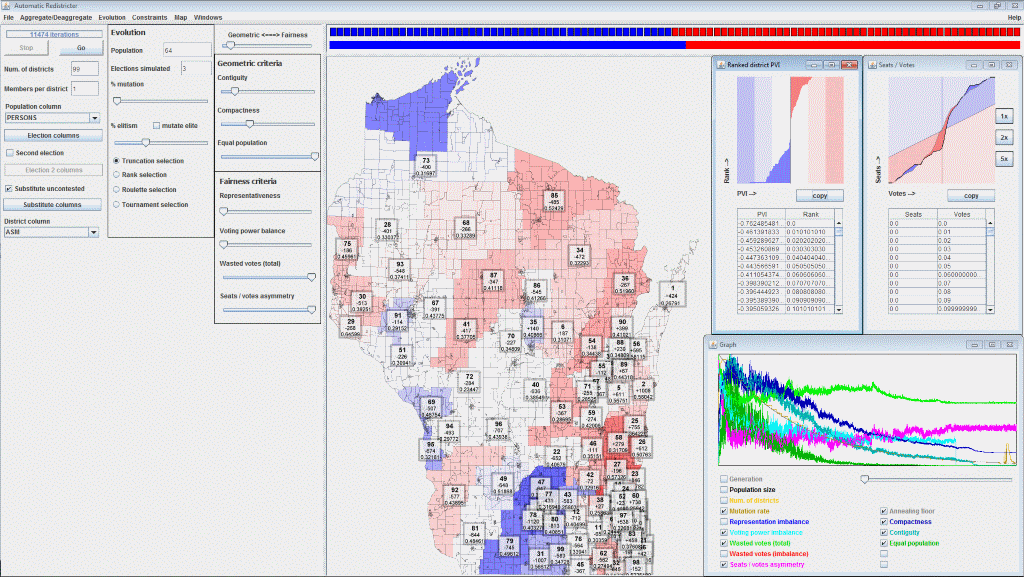 Can gerrymandering by biased humans be replaced by the objective commands of the computer? Kevin Baas, a City of Milwaukee programmer, believes it’s possible, and has devised an intriguing solution he has already submitted to the Florida legislature to solve a dispute over redistricting.

The problem he sought to solve is suggested by results of the 2012 Wisconsin state assembly elections: Democratic candidates received 53.5 percent of the statewide vote and yet won only 39 percent of the seats. This came in the wake of the 2011 redistricting effort, which was undertaken by members of the GOP-controlled legislature. Opponents have called this one of the most gerrymandered states in the U.S. and have argued that Republican legislators used the redistricting process as a chance to enhance their majority —  both by “packing” Democratic voters into fewer districts, and also by “cracking” remaining Democratic areas into small pockets of Republican-dominated districts.

Both scenarios result in uncompetitive districts, illustrating a problem described by Micah Altman (director of research at MIT) and Michael McDonald (University of Florida political science professor): “In theory, allowing political actors to periodically redefine district boundaries improves the quality of representation. In practice, it is often the case that… politicians pick voters instead of the other way around.”

A city programmer by day, Baas built the software entirely in his spare time. He decided to make the software after reading about proposals to turn the job of redistricting over to an independent commission.  Baas calls this a step in the right direction, but says it doesn’t go far enough. “When a map is drawn by a human, you cannot see the procedure that they are using to draw the map; you can’t look inside their head… Drawing the map automatically with open-source software is the transparent approach.”

Baas calls his program Auto-Redistrict, and offers it free online at autoredistrict.org. The code is open-source, because Baas wants to make the inner workings as transparent as possible. The software needs three things in order to work: maps, past election results, and Census population data. Maps are uploaded into the program in the form of shapefiles, which encode geographic information. Once those three forms of data are loaded into Auto-Redistrict, then the user simply needs to press “Go.”

Once started, the program takes an initial map, copies it numerous times, and then experiments by trading election wards between districts. Each mutated map is then scored in terms of specific criteria having to do with geography and fairness. The program then rejects the worst maps, and continues to recombine the best ones. Baas says his program produces maps on the order of hundreds per second, continually scoring them as it goes.

The maps are rated in terms of compactness, equal population, and connectedness. Unlike connectedness and equal population numbers, the quality of compactness is not a legal requirement for electoral districts. But Baas argues it is a desirable feature. The people in a compact district, by virtue of their geographical proximity, are more likely to share the same school districts, social services, and other concerns. “The compactness of a district —  a measure of how irregular its shape is, as determined by the ratio of the area of the district to the area of a circle with the same perimeter —  can serve as a useful proxy for how gerrymandered the district is,” writes Washington Post reporter Christopher Ingram. The idea is, the snakier the shape of a district, the more likely it is to be gerrymandered. (Egregious examples of this include Florida’s 5th congressional district and North Carolina’s 12th congressional district)

On the left is the current seats/votes curve for Wisconsin’s Assembly Districts. It shows a partisan advantage for Republicans in terms of translating votes into seats. This advantage is illustrated by the darkened red area in the middle of the curve. On the right is a curve generated by the application which would result in significantly more competitive elections.

In addition to the geographic assessments, Baas’ program includes four measures of fairness: proportional representation, voting power balance, total wasted votes, and the asymmetry between seats and votes in each district. Proportional representation is defined as the deviation of the number of elected seats for a party from the distribution of the popular vote. Voting power balance is a measure of the competitiveness of elections in a district, determined by how unpredictable an election result is. “Wasted votes” are a way of describing votes that do not contribute to the overall outcome of an election (because too many Democrats or Republicans are packed into one district). In Baas’ program, wasted votes are defined as all votes for a winning candidate above the amount needed to win, added to the total number of votes for any losing candidates who received less than half the number of votes needed to win. The asymmetry between seats and votes in each district is a measurement of how easy it is for a party to convert votes into legislative seats. The overarching goal of the fairness criteria is to try to make districts that are equally competitive, and where the outcomes of elections most closely match the popular vote.

The software has an adjustable setting where users can decide how strongly each of the four fairness factors and three geographic criteria should weigh into the creation of the districts. For example, if minimizing wasted votes is less of a priority to the user than creating compact districts, the settings on each of those factors can be adjusted accordingly. The program can also assess the quality of previously drawn electoral maps, scoring them in terms of the geographical and fairness criteria.

The most controversial aspects of Baas’ software is that it does not take ethnicity into account. According to the Voting Rights Act, minority communities constitute “communities of interest” who must be able to elect a candidate of choice.  UW-Madison political science professor Barry Burden writes, “The Voting Rights Act would prohibit maps that explicitly dilute the voting power of racial and ethnic minorities. These legal considerations are more immediate than others such as compactness. It remains to be seen how an automated approach could be modified to meet the demands of the Voting Rights Act. It would need to be included to be viable.”

David Canon, also a UW-Madison political science professor, notes  “the program treats all of these factors as equal, whereas the law requires that equal population and the Voting Rights Act are satisfied first, and then the other dozen or so redistricting criteria can come into play.” Democratic Assemblyman and redistricting consultant Fred Kessler stresses the importance of understanding the historical, ethnic, socio-economic, and religious contexts of each district when making electoral maps, something even the best computer program would struggle to do, he believes.

McDonald suggests using a combined approach. “Human brains work much differently and can often see patterns that computers have difficulty identifying. Automation may be a way to constrain a redistricting authority, but I would have automation be a base map from which a commission might further deliberate. I would also open the process of offering counter-proposals to the general public, since no one – even a computer – has a monopoly on what constitutes the best plan.” He says Mexico uses a computer algorithm to create a first draft of federal election districts, as a basis upon which officials then negotiate.

Despite the controversy, Baas argues the software’s potential benefits are undeniable. Because it is open-source Java software, its inner workings are open to careful scrutiny. He submitted the program to the Florida legislature for consideration after the Florida Supreme Court ruled that as many as 22 gerrymandered districts there needed to be redrawn. He hopes others will take notice.

“People can complain their vote doesn’t count, or about gerrymandering, and they can try to draw better maps.” But he says drawing maps by hand essentially amounts to pulling data out of a hat. “And you shouldn’t be doing that for something as important as elections. That could amount to hundreds of thousands of people’s votes not really mattering. If you have the data, and you can use it to generate a good map, you should.”

But beyond the issue of man versus machine is the question of whether any solution to gerrymandering, no matter how ingenious, will be adopted in states like Wisconsin. Former state senators Tim Cullen (D) and Dale Schultz (R) are honorary co-chairs of the Fair Voting Project, and were co-authors of a bill to have an independent commission do redistricting in Wisconsin.  Says Schultz: “We couldn’t even get a hearing on our bill.”

Cullen calls Baas’ software solution “a good idea,” but notes, “it doesn’t address the giant roadblock to reform: one party control of a state government.  I am convinced that only the U.S. Supreme Court can stop gerrymandering.”