Despite state efforts, problem persists in 51 of 72 counties, affects more than 22,000 homes.

By Silke Schmidt, Wisconsin Center for Investigative Journalism - Jan 24th, 2016 04:44 pm
Get a daily rundown of the top stories on Urban Milwaukee 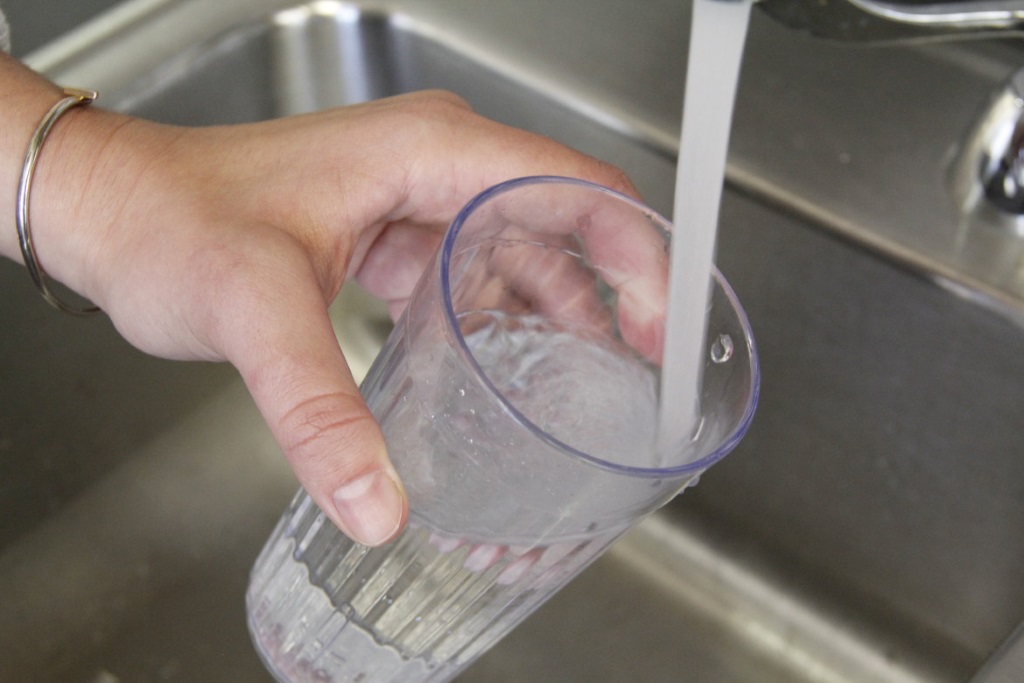 Arsenic is an ancient poison and also a growing threat to drinking water in Wisconsin. Based on statewide sampling, as many as 22,560 homes may be consuming unacceptable levels of arsenic from private water wells. Photo by Bridgit Bowden of Wisconsin Public Radio.

By the time Bradley Burmeister met his high school science teacher more than a decade ago, concerns had already surfaced about an ancient poison that was appearing in drinking water around their Fox River Valley community. Burmeister never suspected, though, that his family’s well would provide some of the scariest data. High levels of arsenic, a substance used as a poison since the Middle Ages, had been detected in 1989 in several counties in the Fox Valley region of northeastern Wisconsin. In 2003, Seymour High School science teacher Dennis Rohr and his students began a study of private well water samples from the area that would continue for the next five years.

The arsenic level the students detected in the Burmeister family’s well was off the charts: 1,650 parts per billion (ppb), or 165 times the federal health standard of 10 ppb. Burmeister — whose experience in the study sparked an interest in science that culminated in medical school — recalls it being the highest level found in the study.

“My parents weren’t too surprised, they just said, ‘That’s probably our luck,’ ” Burmeister said. “We started drinking bottled water all the time and also used that for cooking.” 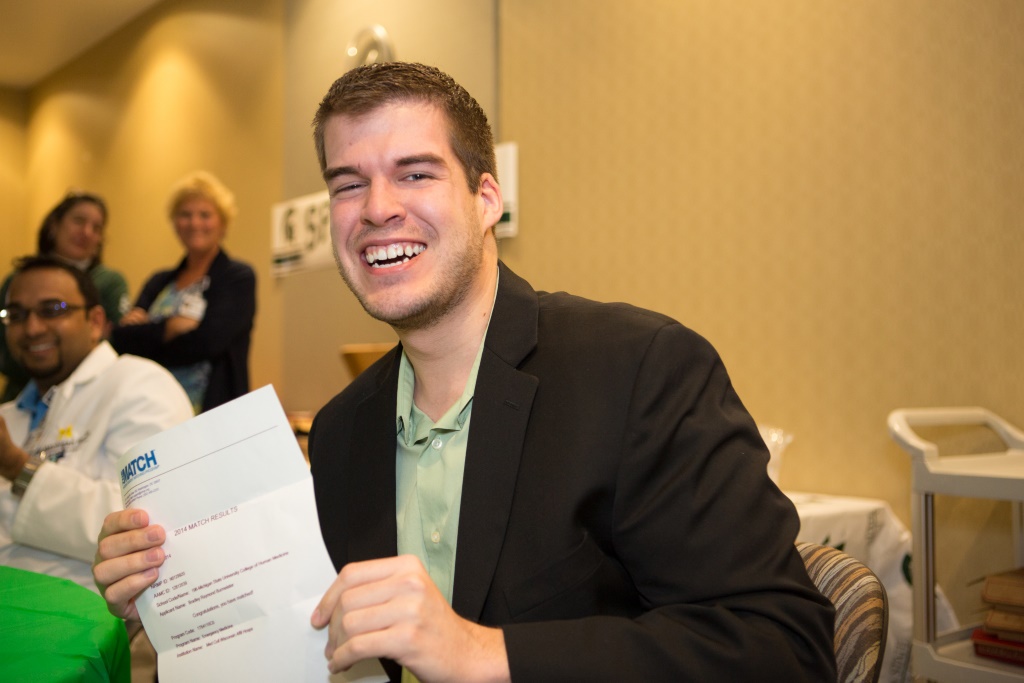 Michigan State University student Bradley Burmeister reacts to receiving word in 2014 that he will serve his medical residency at the Medical College of Wisconsin in Milwaukee. Burmeister was motivated to study science and go to medical school after participating in a project at Seymour High School to test local drinking water. It showed many residents in and around the Outagamie County community, including his family, had dangerously high levels of arsenic in their water. Photo by Clear River Photography.

To this day, Burmeister’s parents regularly buy a case of gallon-sized water jugs at the grocery store. Despite the inconvenience, Burmeister said his parents feel it is a more affordable way to address their arsenic problem than drilling a new well or purchasing a water treatment system.

The Burmeisters are not the only family having to find alternatives to turning on the tap; arsenic is a major concern in Outagamie and Winnebago counties. The Wisconsin Department of Natural Resources designated an arsenic advisory area in these counties in 1993 and implemented stricter regulations for testing and well construction in 2004 and 2014.

But arsenic problems are not confined to northeastern Wisconsin. Levels above the federal standard have been detected in 51 of Wisconsin’s 72 counties, according to a 2006 Wisconsin Groundwater Coordinating Council report.

The most serious health effects from arsenic exposure include a variety of cancers, nerve damage, diabetes and cardiovascular disease. Chronic low-level exposure during childhood has also been linked to decreased intelligence.

In a 2014 study, researchers studying schoolchildren in Maine found regular consumption of drinking water containing 5 ppb of arsenic or more was associated with a significant IQ reduction in students in grades three to five. 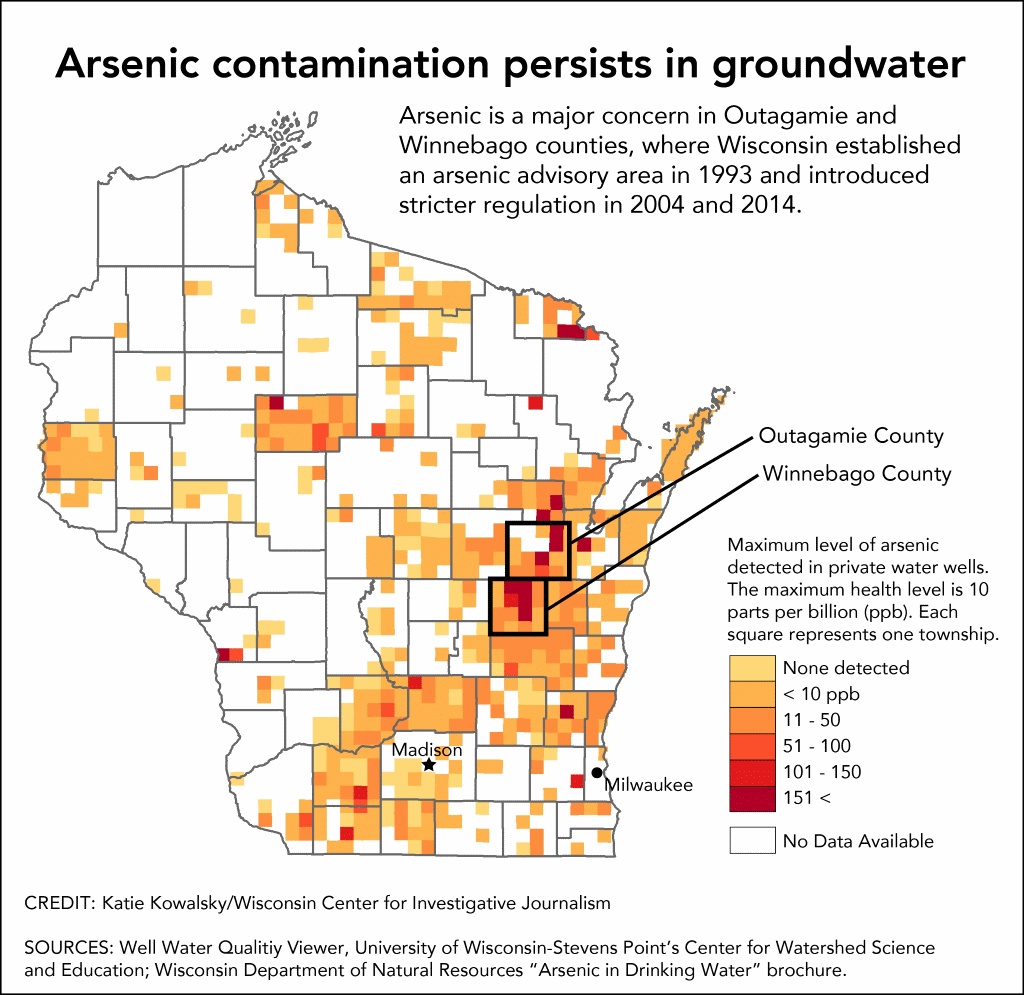 “The magnitude of the association … raises the possibility that levels (of arsenic in drinking water) that are not uncommon in the United States pose a threat to child development,” the researchers found.

A 2015 study of infants led by Dartmouth University researchers found that arsenic in a mother’s urine, likely due to her consumption of contaminated well water during pregnancy, “was associated with a higher risk of infection during (an infant’s) first year of life … and with diarrhea and respiratory symptoms.”

In 2001, the U.S. Environmental Protection Agency lowered the federal health standard, or maximum contaminant level, for arsenic in public drinking water from 50 to 10 ppb. This step reflected the increasing scientific evidence for the dangers of arsenic exposure to human health and matched the World Health Organization’s global drinking water standard.

The highest level ever detected in the state was found in a private well in northeastern Wisconsin. The well tested at 15,000 ppb — 1,500 times the new federal threshold.

“We have an arsenic hot spot in Wisconsin,” said John Luczaj, a geoscience associate professor at the University of Wisconsin-Green Bay. 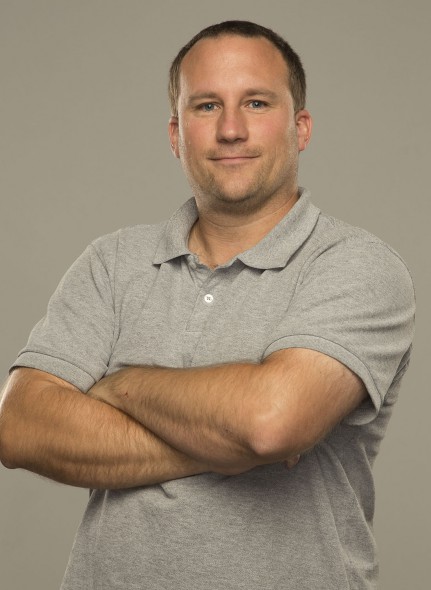 University of Wisconsin-Green Bay associate professor John Luczaj has documented numerous contaminants in Wisconsin’s groundwater, including arsenic. The ancient poison can be found in drinking water around the state, but especially in Outagamie and Winnebago counties in northeastern Wisconsin. Photo from UW-Green Bay.

Madeline Gotkowitz, a hydrogeologist at the Wisconsin Geological and Natural History Survey, agreed. “Arsenic is a big problem in Wisconsin, and I don’t think many realize that,” she said.

The dangerous chemical can end up in groundwater through multiple mechanisms. In Wisconsin, arsenic is typically released when naturally occurring sulfide minerals in certain types of bedrock aquifers break down by coming into contact with oxygen.

In 1987, the DNR discovered that the St. Peter Sandstone aquifer in northeastern Wisconsin contains a high concentration of these sulfide minerals. Knowing that it was the water source of more than 20,000 private wells, agency officials knew this might spell trouble.

“Seymour High School rests directly above the St. Peter Sandstone formation,” science teacher Rohr said. “So arsenic was the main focus (of our water study) as it impacted our local community the most.”

The oxygen that sets off the breakdown of sulfide minerals can be introduced by well drilling and disinfection methods, or when the water table — the level below which the ground is saturated with water — is drawn down. This may occur during periods of drought, or be triggered by human use, such as the operation of high-capacity wells.

Because of this interplay between geology and human activity, Luczaj said, private wells whose water previously tested fine for arsenic may lose their integrity.

Patrick Laughrin is all too familiar with the effect of high-capacity wells in his part of the state. He lives in Hilbert in Calumet County, just east of Winnebago County.

“The arsenic in our well showed up for the first time when the high-capacity wells came in and dropped the water table,” Laughrin said. “It makes sense. If you drop the water table, you get more oxygen and that releases more arsenic into your water.”