By Samama Mahmud, Milwaukee Neighborhood News Service - Jan 12th, 2016 10:06 am
Get a daily rundown of the top stories on Urban Milwaukee

Nate Hamilton can recall an uncle taunting him in years past because of how softly he speaks. Hamilton’s brother, Dontre, the uncle said, spoke like a man should, with weight and power.

Nate Hamilton, 34, now speaks for his brother, who was shot to death by a police officer in Red Arrow Park, across from Milwaukee City Hall, in April 2014. He does so, though, with more purpose and a new outlook on life.

“It made me look at myself a lot more and say, ‘What am I doing? How can I be a better man? How can I represent my brother?’” Hamilton said recently. “I feel it changed me for the better. I put myself into a position where I started fighting and advocating for not just my brother, but for other lives. It pushed me to a point where I said I want to create a legacy behind Dontre.” 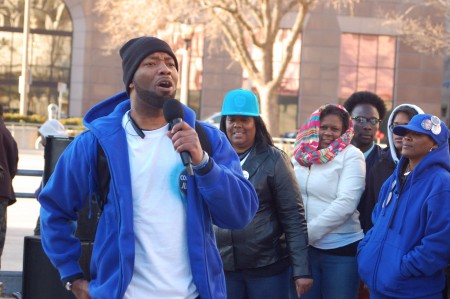 Hamilton has since co-founded the Coalition for Justice, an organization that has led protests and demonstrations in its quest to call attention to his brother’s death and to prevent others like it. Police Chief Ed Flynn fired the officer, Christopher Manney, in October. State and federal prosecutors opted against filing criminal charges in the case.

A father of three boys and a girl, ages 1 to 12, Hamilton said his brother’s death forced him to see beyond his own life. “Until Dontre died, I didn’t know that there were thousands of families who have not received justice when these types of incidents happened. There were a lot of things that I didn’t see and didn’t care about.”

Losing his brother also led Hamilton to become more career-minded. After working at Pick ‘n Save for nearly a decade, he went back to school and took carpentry and other classes to start his own home repair business. With one semester to go at Milwaukee Area Technical College, he is eager to expand his skills and his business.

“We are picking up more and more work. We are looking into advertising and how to be a better company, how to be a more sound company, and a more secure company so we can grow and provide more jobs for others in the community,” Hamilton said.

“It’s not only about me,” he added. “It’s about being able to provide others with financial security. I want to be a company that gives back in a big way to my community.”

Hamilton also aims through the Coalition for Justice to inspire and build a movement that transforms his segregated city into an accepting and empowering community. “We have to aggravate the system enough to show them that there is a big amount of displeasure within the community, within families,” he said.

His own family is pleased with Hamilton’s personal and civic transformation.

“I believe that Nate was chosen to do the work that he is doing. It is needed,” said his mother, Maria Hamilton. “In our community, nobody has taken the initiative to get some real change in legislation. The wakening of Milwaukee is happening and Nate was destined to be a part of it.”

“From that day (when Dontre died), it seemed like he was broken,” Perkins said. “But as time went on, he has shown one thing that my dad always taught us growing up as children — and that was to be a leader and to always have each other’s back.”

One thought on “Nate Hamilton Still Fighting for Justice”