King Courteen Is a Musical Explorer

The singer and wood worker had a strong religious upbringing and explores that in songs. 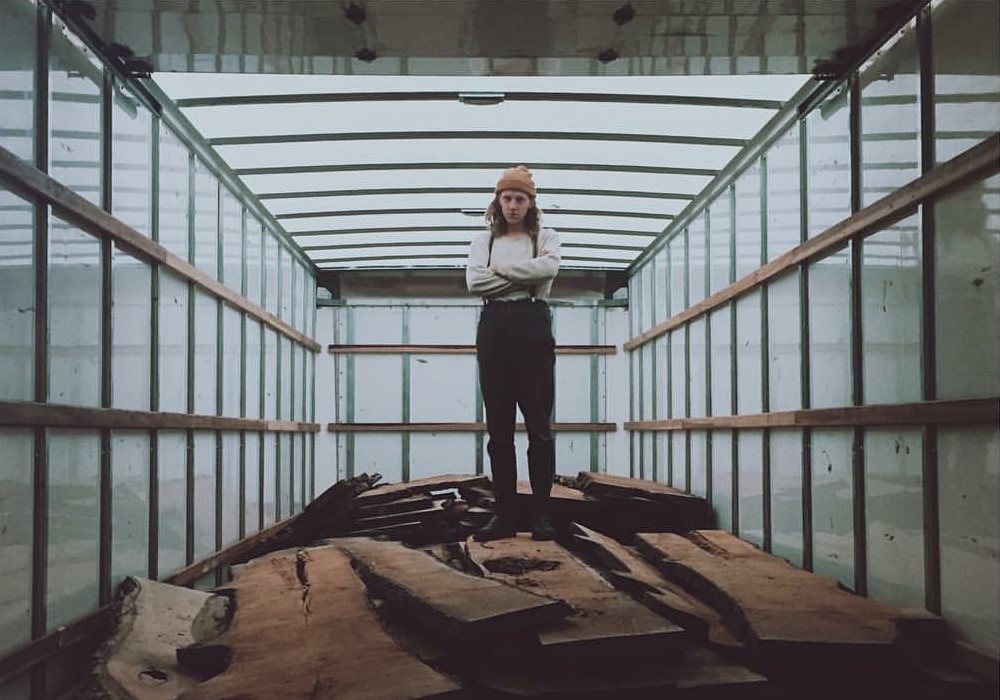 Local folk musician King Courteen is planning on shaking things up, and it’s not just because he’s no longer living in his Riverwest wood shop. The singer/wood worker spent the last six months on a band hiatus, and he’s beginning to get back into the musical swing of things. However, listeners shouldn’t be surprised if the folksy guitar tramp returns with a rather different sound.

Urban Milwaukee went down to his wood shop to talk shop about his latest return to music.

When did you start playing music?

I’ve pretty much been playing music my whole life. Both my parents are church musicians. I started playing piano probably when I was four. I was always in choirs. My mom was the choir director at Christ the Lord in Brookfield, where I went while growing up. I was always around music. For my parents, it was as important to take music lessons as any other subject. My three older brothers and I all took piano and played a brass instrument. I played trumpet.

What inspired you to make music then?

I didn’t start writing music until way later. The music that got me started playing was all folk stuff, like Bright Eyes. At the time I was listening to a lot of BB King. Now I listen to a lot of King Krule, James Blake, Unkown Mortal Orchestra and Radiohead.

What’s your process for making music?

Folk, but with a choral base. All through high school I was in all the choirs, even like show choirs. I did all that dancing and shit. I just kind of passively took it in, and now I’m using it.

Oh lots of ‘em. Like Amanda Huff, she was the front of Flag Signals. D’amato for sure. Caley Conway. Daniel Mitchell, who is the lead of Ladders. WebsterX and Michael Swan.

Speaking of WebsterX, how did you get linked up with him and Kiings for the song “1984”?

I worked at Urban Outfitters with him like three or four years ago. That was before he was performing. I had already been writing at that point; I’m sure he was writing, but nothing like now. I didn’t even listen to rap at that point. We had just always talked about writing music and performing. He was always really supportive. He would come to all the uncool shows where there was like five people there. I think Kiings brought that track to him and Bliss & Alice, and I’m pretty sure Sam (WebsterX) just recommended them to me and thought I would fit well for that part. I went into that having no idea what was going to happen. They brought me into 88Nine. I didn’t know if I was going to sing or what was going to happen, and four hours later we had the song. I would really like to do more of that kind of stuff. That was totally out of my comfort zone, but it worked so well.

Do you have anything like that in the works?

Nothing in the works, I’ve had a few people confront me about doing collaborations. I’ve actually taken six months off from playing music to focus on my woodworking. Those are equal things in my life, woodworking and music. I was doing furniture. I did a kitchen and two bathrooms; all custom, with reclaimed wood from river west. I want to be known dually as a woodworker and a musician. I want to have crazy shows where I build crazy backdrops. I’d like to take organs and re-build them with real wood. Somehow incorporate the two. The thing is, I do this for six months and then feel like shit, because I’ve only written two songs in the past year. I used to be writing three songs a month. But, when I do music I’m neglecting this love.

So what are the plans for the near future?

Well, I definitely need to record. I have way too many songs to have not recorded anything. I don’t have a big desire to tour right now, probably because I don’t have anything recorded. When I did that collaboration on “1984,” it was so seamless doing something with a group. There is like a feeling you get from that you don’t get from being one dude with a guitar. I’d like to record an album. There is one song in particular that I’ve recorded a few times, but I still don’t feel like I have it right. It’s called “Old Adam.”

What is that song about?

A lot of my music has a religious theme, that deals with being raised very conservative and living in a community that’s not super conservative. Some of my songs are specifically dealing with religious themes. Like “Old Adam” refers to being dead in sin and the separation from God. I’m referencing terms and stories and things. But it’s not your typical very positive song. It’s more like I’m going to die some day and what does that mean. It’s also a way for me, if I have a big problem in my life, I can put it into a song and it helps me figure it out. I also have happy songs about girls, but I like writing about depressing shit.

Are you still pretty religious?

I’m figuring it out. I don’t know what I would say I am right now.

So where do you want to go with your music?

My big thing right now is to record “Old Adam,” unless something else comes along. There’s such a big film community, as you can see with WebsterX, and I used to be so against the idea of a music video. I thought if you were a good musician you didn’t need that. Especially with “Old Adam,” there are all these religious things and personal experiences. So, doing like a short film would allow people to be able to dive deeper into it.

How is your musical style evolving?

I thought I knew what my style was, but after I did the collaboration with Sam (WebsterX) it just totally threw me off; like in a good way. I was never really a fan of Hip-Hop, and then after I heard some local stuff I started to appreciate it. Working with them influenced me so much. I had never heard my voice with other things. I had just heard it with a guitar. It just kind of opened up my mind to what could be done. I’m not an instrumentalist. I’m more of a singer. What I learned from that experience is that I kind of want to view my voice as an instrument, and not stick to one genre. I want to always be exploring.