Unlike last winter, there will be little ice cover on Great Lakes. 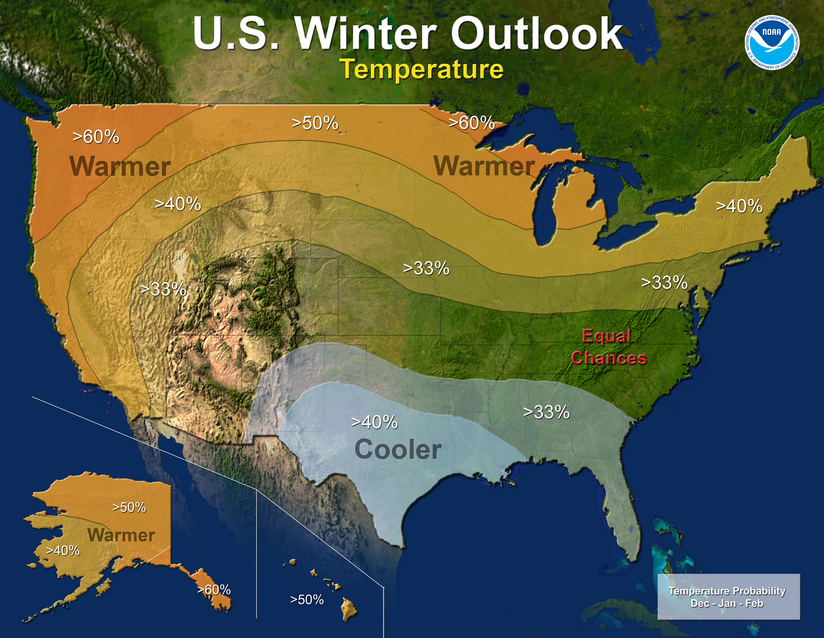 Midwesterners considering a virgin sacrifice to save themselves from frigid temperatures this winter can put down the knife.

The National Oceanic and Atmospheric Administration reports that this year’s El Niño will blow a warm, dry winter over the Great Lakes.

The graphic accompanying the report shows that December through February will bring warmer, dryer temperatures to the Great Lakes region and a wetter, colder winter to southern states.

Alternative snowmen made from cheese, sand and other non-snow substances may be a big hit. And if you get drunk and fall asleep outside, you are less likely to endure frostbite.

The 2014-2015 winter brought frigid temperatures and hefty snowfall, but thanks to El Niño things will be a little different this year, according to the U.S. Winter Outlook.

The Illinois and Indiana Sea Grant reported that last winter was the second straight year of 80 percent ice cover for the Lake Michigan. The Great Lakes had record ice coverage, as we reported last March.

These icy Midwest conditions resulted in local governments spending a ton of money on snow removal, as the price for road salt doubled or tripled, as Time Magazine reported.

“Several severe winters are forcing prices upward,” Todd Matheson, a spokesman for the Wisconsin Department of Transportation, told the magazine. Wisconsin normally goes through about 500,000 tons of salt a year, he noted, but for last year’s winter the state had 564,000 tons on hand with 141,000 tons as an option to purchase.

That won’t be a problem this winter, as El Niño will help deliver a warmer winter.

Certain winter sports — like ice fishing —  may be hurting from a lack of ice.

Fishing spots may take longer to freeze over, said Jack Horning, the national sales manager of K&E Stopper Lures in Hastings, Michigan. “First ice can be a tricky time of year, so be sure to take extra steps to insure your safety,” Horning said.

If it’s too warm in the south, northern lakes will generally develop deep ice more quickly, giving anglers an incentive to travel, according to Horning.

But if predictions are correct and El Niño holds out through the winter, ice-anglers will have a warm, dry spring to get a jump on summer fishing.

A version of this story was originally published by Great Lakes Echo.