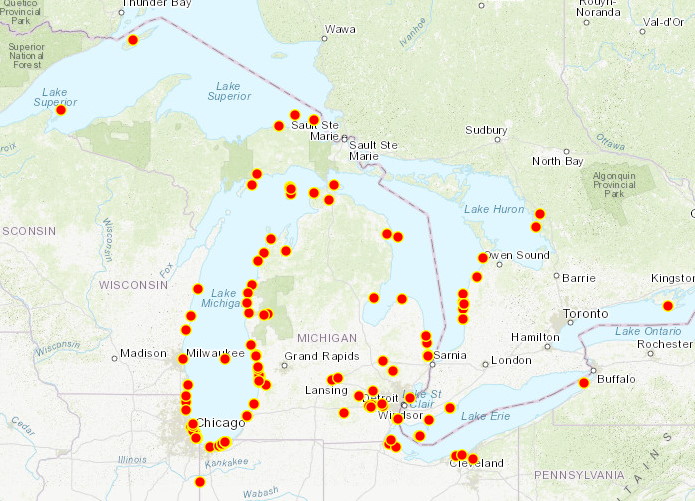 Balloon debris found in the Great Lakes since June 1st, 2019. Image from Balloondebris.org.

A university researcher is tracking balloon litter in the Great Lakes region to spread awareness of how it harms the environment.

Lara O’Brien, a master’s student at the University of Michigan’s School for Environment and Sustainability, created BalloonDebris.org to help citizen scientists track where popular balloon launches end. It maps where the balloons are found and allows people to submit photos of the debris.

“My hope is that by engaging and participating in this citizen science research, more people will become aware of the impact balloon releases have on the environment,” O’Brien said.

Surveys by the nonprofit Alliance for the Great Lakes found more than 18,000 balloons, balloon pieces or balloon strings along Great Lakes shorelines between 2016 and 2018, as the Detroit Free Press reported.

Balloon litter is dangerous to wildlife that can get tangled in or eat it. Most balloons are not biodegradable and the ones that are usually take years to break down, O’Brien said. According to the University of Tasmania, balloons are 32 times more likely to kill than hard plastics that wildlife may eat.

O’Brien said she was horrified to see balloons released for celebrations and decided to take action.

“I am sure these groups have good intentions behind their actions,” she said. “However, every single one of the balloons they release eventually ends up as litter polluting oceans, lakes, rivers, forests and other natural areas.”

Since June, when the survey began, the site has catalogued over 900 pieces of balloon debris and litter, including latex plastic balloons, ribbons and Mylar balloon pieces. One person found 85 pieces of balloon debris while taking a 2-mile walk in the Indiana Dunes National Park along Lake Michigan, O’Brien said. Photos have been submitted to the survey showing balloons on beaches, tangled in trees and underwater.

O’Brien said she hopes her site brings awareness to the dangers of balloon releases, used to celebrate events like graduation and baby showers. States that have already banned balloon releases include California, Connecticut, Florida, Tennessee and Virginia.

She hopes the states surrounding the Great Lakes are next and wants the University of Michigan to ban balloon releases on campus and for state lawmakers to follow and introduce bills prohibiting the release of balloons in Michigan.

“With a little awareness, people can change their behavior, deciding not to release balloons and instead, start using eco-friendly alternatives.” O’Brien said.

The site lists alternatives to balloon releases, including blowing bubbles and planting trees. It provides information on how to get involved in helping to clean up the Great Lakes and links to organizations with a mission to end pollution in the Great Lakes.