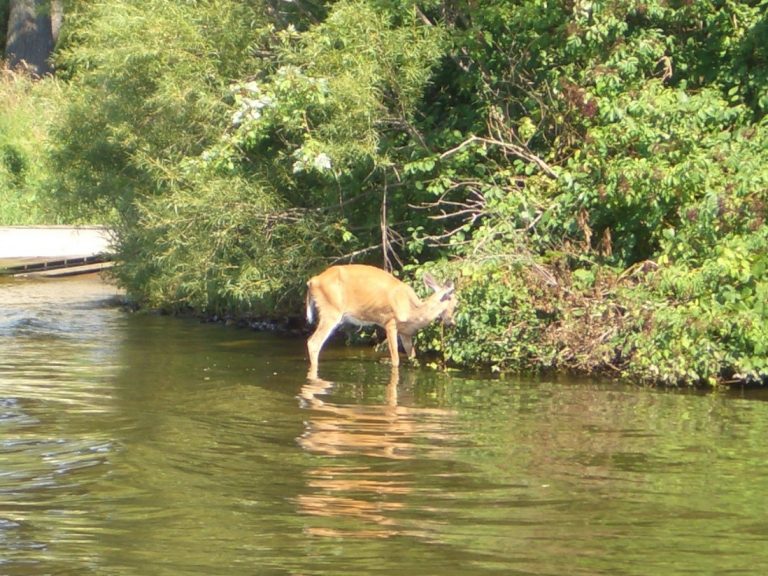 Protruding ribs and hipbones are signs that a deer has chronic wasting disease. Photo from the Wisconsin Department of Natural Resources.

Data from dead deer in Wisconsin and applied to living ones in Virginia could help detect disease earlier in herds in the Great Lakes states and elsewhere.

A group of wildlife agencies has developed a new statistical approach for detecting chronic wasting disease in white-tailed deer. That’s important because the neurological disease, often referred to as CWD, has spread to 25 states, is contagious and always fatal.

“Chronic wasting disease is an important and big problem for white-tailed deer, elk and mule deer in this country, and we need to continue to look for new techniques to manage this disease,” said Jenny Powers, acting chief for the Wildlife Health Branch of the National Park Service. “It’s going to be with us for a long time.”

They tested it in Shenandoah National Park in Virginia.

This technique determines if CWD has spread to a new population, said Dan Walsh, a quantitative ecologist for the United States Geological Survey. It cannot monitor CWD where it already exists.

The data collected on Wisconsin deer was key to creating the model reported last June in the Journal of Applied Ecology.

“They have a big CWD problem,” said Christopher Jennelle, a research biologist with the Minnesota Department of Natural Resources’ Wildlife Health Program. “They had a very rich data set with information on thousands of CWD positive animals.”

The researchers looked at the relative risk of chronic wasting disease as a function of age, sex and cause of death.

“The basic idea is that not every individual deer in a population has equal probability of getting chronic wasting disease,” he said. “By taking the Wisconsin data set, we were able to estimate different relative risks of animals having CWD.”

That helped them to figure out which deer should be tested for the disease.

They found that older male deer have a higher probability of being positive for the disease.

And they weighed how well the other factors predict the likelihood that a deer is ill.

“What that means is an adult male hunter-harvested white-tailed deer is more valuable for CWD surveillance compared to a yearling male that’s hunter-harvested,” Jennelle said.

The researchers tested the model in Shenandoah National Park where chronic wasting disease has not yet been discovered, although it is in other parts of Virginia.

Deer that the model predicted had the greatest likelihood of having CWD were tested. None had the disease, a finding consistent with what the researchers knew about that population.

The implications of the study are important for more efficient testing.