Why the Estabrook Dam Was Created

Ancient geological conditions created troublesome stretch of the Milwaukee River which led to unique solution. Part 2 of a series.

The recently broadcast documentary “Milwaukee: A City Built on Water” makes a compelling case for the importance of water throughout Milwaukee’s history, and the value of studying and appreciating the historic context of the city’s current water initiatives. I think that the same is true for the Estabrook Dam and this section of the Milwaukee River. It’s important to know its unique history before forming a judgment about whether the dam should be removed — as a consensus of local leaders favor — or repaired, which I believe is the correct decision to make. 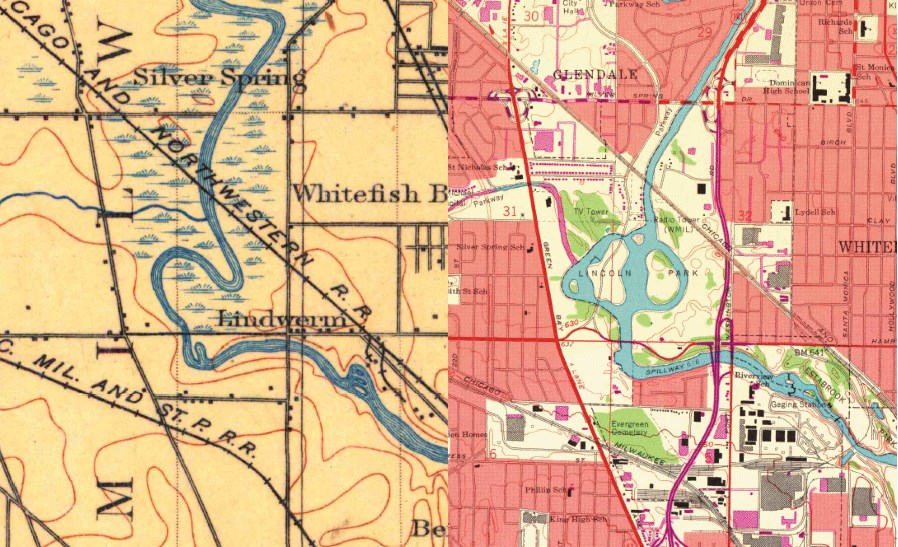 Geologic History of the Milwaukee River Near Lincoln Park

One of the more fascinating aspects of the study of geology is the occasional opportunity to make a connection between the landscape of today and geologic events that occurred millions or even hundreds of millions of years ago.  Such is the case with this segment of the Milwaukee River, where during the Devonian geologic period (circa 360 to 420 million years ago), a limestone reef formed in a shallow sea due to some favorable combination of water depth, temperature and other conditions. Over time, thousands of feet of additional sediments were deposited, sea levels rose and fell, sediments turned to stone, and a reef was formed in this area (where the Estabrook Dam is located) which would influence the Milwaukee River.

The path followed by the Milwaukee River was shaped in part by the retreat of glacial ice from the bed of Lake Michigan from approximately 14,000 to 9,000 years ago, and was described by William Alden, one of the most renowned glacial geologists in Wisconsin, as follows:

“Near Fredonia, when within 9 miles of [Lake Michigan]…it bends sharply to the right and flows southward, almost parallel to the lake shore, for more than 30 miles… its channel is within 3 miles of the lake shore, and at some points the shore is less than 1 mile distant.” That rather unusual course, he notes, is due to parallel ridges bordering the lake and the lack of any east-west valleys cutting through the ridges, which might have allowed the river to empty sooner into Lake Michigan. As a result,  “the stream could find no other course than that to the south for a long distance” and not till it reached the Menomonee Valley “was the stream diverted to the lake.”

The Milwaukee River in the area of Lincoln Park reportedly occupies a former glacial outwash channel – thus its present location may actually predate the end of the Wisconsin glaciation, around 11,000 years ago. The progressive erosion in the channel of the lower six miles of the Milwaukee River was halted when the stream encountered the exposed bedrock formed by the ancient reef in Estabrook Park. Upstream from this barrier, the river developed a distinctly different geomorphic form – one characterized by a deep and meandering channel, surrounded by hundreds of acres of low lying wetlands prone to flooding. Below the reef, the Milwaukee River flows swiftly to its mouth at Lake Michigan.

Industrial Use and Transition to Recreational Use (1875-1916)

The exceptional chemical and physical properties of the bedrock in this segment of the Milwaukee River played a role in Milwaukee’s early industrial history.  The Milwaukee Cement Company was established at this location in 1875-76, due to the presence of extensive bedrock outcrops associated with the ancient limestone reef. Its unusual chemical properties enabled the rock to be converted into an early type of high-quality “natural” cement.

The land occupied by the company and a competitor (the Cream City Cement Company) acquired in 1894 eventually expanded to encompass 350 acres of land that spanned both sides of a one-mile long section of the Milwaukee River extending from Port Washington Road to Capitol Drive. The industrial complex grew to include several large buildings, a network of rail spurs, extensive underground mines as well as quarries that occupied significant portions of the former bed of the Milwaukee River. By 1891, the company’s annual production of 475,000 “barrels” (each weighing about 265 pounds) made it the largest cement works in the United States and its products were distributed throughout a territory extending from Cleveland to Denver. However, the company’s supremacy was short-lived, as the invention of the rotary kiln enabled the production of the lower cost and higher quality Portland cement that remains in use today. By 1911, production was entirely suspended, and by 1914, the site was vacant, with the kilns dismantled and sold for scrap. As has been true in recent decades for so many other former industrial properties on the lower portion of the Milwaukee River, the closing of an outdated industrial facility turned out to be a necessary prerequisite for environmental transformation and renewal.

The transformation of this section of the Milwaukee River for recreational use was launched only two years later, when in June 1916, Milwaukee County purchased the portion of the former Milwaukee Cement Company property lying east of the river for construction of what was to become Estabrook Park. 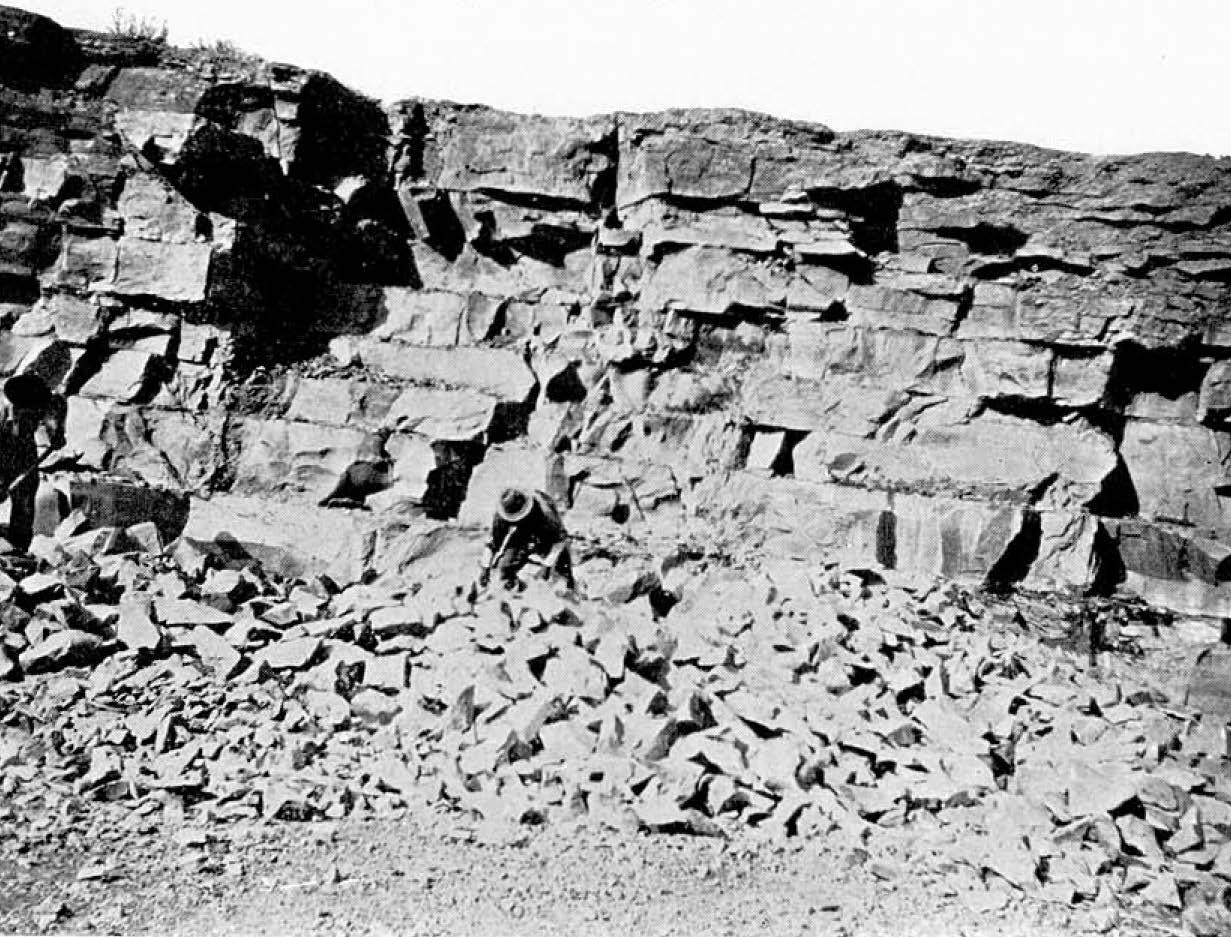 While the portion of the river east of Port Washington Road was dominated by industrial uses, upstream areas to the west were dominated by farming and recreation. The efforts to control flooding of the Milwaukee River in areas extending north through Lincoln Park, date back to at least 1924, the year of a major flood. The flooding problems in this area were a key factor in a series of public works projects completed over the next 15 years that included construction of the Estabrook Dam. The flooding was caused by several factors, but most notably two: (a) the approximately one-mile long limestone outcrop or ledge extending from 1000-feet east or downstream of the Port Washington Road Bridge to 4,000 feet upstream of the bridge and near the center of Lincoln Park, and (b) sharp bends in the River that slowed flow during the floods and which were susceptible to build up of ice floes during the spring thaw.  As the characteristics of the limestone bedrock present near Estabrook Park had led to the development of the largest cement plant in the U.S., the erosion-resistant characteristics of the bedrock further upstream led to the flooding issues as well as to the extensive wetland complex covering an estimated 300 acres just upstream from the Estuary.

The highest part of the bedrock ledge reportedly was located just west of the Port Washington Road Bridge.  A design report for the dam dated 1934 describes the rock outcrop as follows: “The cause of the trouble north of Capitol Drive is a limestone ledge or outcrop about a mile long, over which the river flows. The elevation of this ledge,” it notes, is approximately 36 feet above the river level when it empties into Lake Michigan. As a result, the report notes, once the river passes this ledge, the water flows quickly downstream until emptying into the lake. Meanwhile, “For a distance of 3 miles upstream from this ledge, there is no fall in the river bed; in fact, successive floods have gouged out the river bottom to such an extent that in this 3 mile area, the river bed, for the most part, is well below the top of the rock, thereby creating, in effect, a body of still water or a lake as wide as the river, and about 3 miles long.”

Use of the term “lake” for this section of the Milwaukee River as it existed prior to the flood control project is accurate, as it meets the definition of a “drainage lake” used by the Wisconsin DNR. To put this into perspective, the Milwaukee River drops approximately 750 feet in elevation (or 7.5 feet per mile) in the approximately 100-mile distance from its origin in Fond du Lac County to its mouth at the Lake Michigan, whereas there was essentially no drop in elevation for the 3 miles of the river that formed the drainage lake.

Landowners in the Lincoln Park area were actually instrumental in efforts to change state law related to flood control measures, in particular, a new chapter of Wisconsin Statutes (Chapter 79. Flood Control) enacted in 1931. Within a little over a month of enactment, the first petition under the new statute was filed with the Public Service Commission of Wisconsin by George Kramer (Secretary of the Lincoln Park Advancement Commission) and 48 others seeking relief from flooding by the Milwaukee River. The resulting Milwaukee River Flood Control Project initially focused on construction of a diversion channel near Thiensville to divert flood waters from the upper Milwaukee River directly into Lake Michigan.  But technical challenges prevented this initial plan from moving forward, and less than two years later, in the fall of 1933, work on an alternative plan began, to remove the rock ledge and deepen the channel of the Milwaukee River and to build the dam.

Work on the channel deepening began as a Civilian Works Administration project. The channel modifications were described as having extended 1,600 feet downstream from the Port Washington Rd. bridge to 5,500 feet upstream, and as having created a channel with a uniform grade and a uniform channel bottom width of 200 feet.  Although I haven’t found any engineering reports or articles documenting the original plans for the channel deepening project, the construction of a dam in Estabrook Park appears to have been a component of the overall project from its earliest phases.  A layout plan for deepening of the channel within Estabrook Park dated December 1933, and approved by the Milwaukee County Park Commission in January 1934, included a dam, spillway, and ice breaker features at the approximate current locations, as well as channel modifications for the portion of the river extending from the Port Washington Road Bridge downstream to “Rock Ledge Falls” (about 1,300 feet downstream of the dam site).

15 thoughts on “A Freshwater Controversy: Why the Estabrook Dam Was Created”