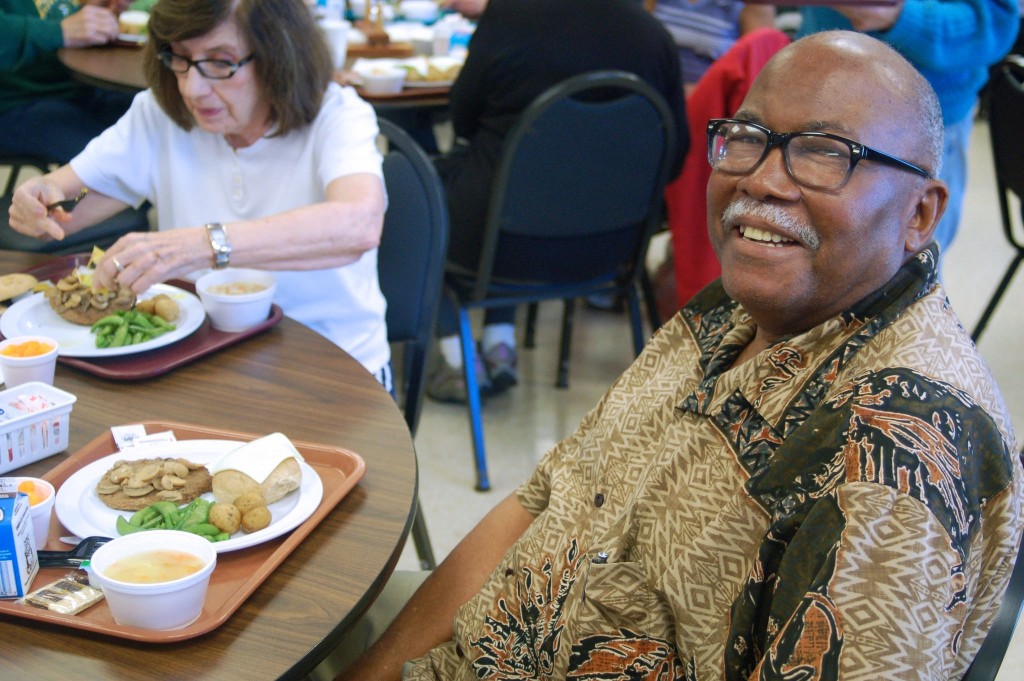 Joe Orr, 83, said he began participating in the meal program three years ago, after delivering county meals to the elderly for 16 years. Photo by Edgar Mendez.

For 16 years, Joe Orr delivered meals to the elderly as a part-time truck driver for Meals on Wheels, the delivery arm of Milwaukee County’s Senior Nutrition Program. But on this day, Orr, 83 years old and three years retired, takes his usual seat in the dining room of the Brown Deer Senior Center, 7841 N. 47th St., sitting down to a lunch of soup, Swiss beef topped with mushrooms, green beans, small potatoes and a roll.

Orr now participates in the county’s senior meal program, which in 2015 will serve an estimated 250,000 meals at sites such as Brown Deer and deliver another 342,000 meals to homebound seniors, according to Beth Monrial Zatarski, director of the senior meal program at the Milwaukee County Department on Aging.

There are 26 senior dining sites in the county, four of which serve specialty ethnic meals geared toward Hispanics and Asians. In addition, meals for delivery are prepared at nine dispatch sites. The county owns some sites, while others are run out of social service agencies, public housing buildings and other locations. Most sites serve only lunch but some also provide dinner. There are no financial restrictions to participate in the program, but there are eligibility requirements to receive homebound meals. In addition all participants must be 60 or older. 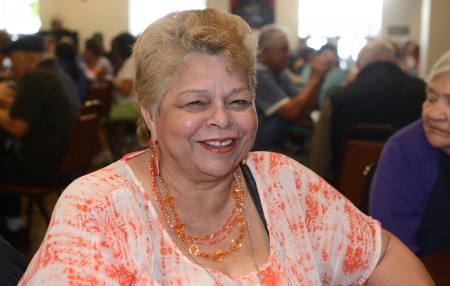 Greeting the 44 seniors who’ve come for lunch at the Brown Deer site is Evelyn Fayne, who has been working there since 2010, during the past year as site supervisor.

Fayne said the meal program relies heavily on volunteer workers, including the 17 who rotate days at her site. She said what she enjoys most about her job is hearing the senior’s stories.

“They love to share their memories; talking about the past,” Fayne said.

According to Orr and others, the conversations are just as important as the meal. “The food is good but I come here to meet and talk to nice people,” said Orr.

The opportunity to socialize draws seniors to the meal centers, according to Zatarski, who said many of them live alone and might not have anyone else to talk to. Drawing seniors from their homes allows the county to supplement meals with wellness programming, including visits from social workers, as well as field trips and other activities that vary by site.

The day usually flows based on the whims of the clients. “Some like to go on field trips and some like to play cards,” Zatarski said.

The home-delivered meal program offers the opportunity for a daily wellness check. “If a homebound client doesn’t answer their door their family members are notified,” Zatarski said.

The need for services for seniors in Milwaukee County is increasing; 16 percent of the population is 60 and older and that number is expected to grow, according to the 2014 American Community Survey. In addition, changes made to the federal Supplemental Nutrition Assistance Program (SNAP) have resulted in food stamp reductions for many elderly in Milwaukee. Perhaps as a result, the number of senior meals served will increase from 572,000 in 2014 to a projected 592,000 this year.

And for many, said Zatarski, the county-provided meal is the only one they’ll eat that day, which is why each meal contains a day’s worth of calories.

Seniors can often be seen packing away leftovers.

While seniors at the Brown Deer or Lapham Park meal site, at 1901 N. 6th St., might set aside spaghetti, Italian beans and pistachio pudding for later, at the United Community Center’s (UCC) ethnic meal site at 730 W. Washington St., it’s more likely to be enchiladas and Puerto Rican rice.

The site, which is open seven days a week, is connected to UCC’s senior housing and serves an average of 130 seniors a day. Many of the participants speak only Spanish, according to Hector Hernandez, program coordinator for the UCC Senior Center. Transportation to and from the site is also offered to residents in the surrounding neighborhood. Since the program is run by a major nonprofit, it can provide more services and activities for seniors to participate in, Hernandez said.

Those activities, which run from 8:00 a.m. to 4:30 p.m. on weekdays, include dancing, guitar lessons, zumba, outings to local parks and carnavales to mark special occasions. Antonio Chavez, 68, who lives in UCC’s senior housing facility and on this day sits in the lobby wearing a sombrero, is there from open to close.

“It’s better than sitting at home dying,” said Chavez with a laugh, before heading to the cafeteria upon hearing an announcement that meals would soon be served.

Hernandez said the draw is the meal, but the ultimate goal is to keep seniors from being isolated in their homes. The isolation can be magnified for those who now live far from their homelands in Mexico, Puerto Rico and other countries, he added.

The desire for company drew 61-year-old Delia Melendez, who is originally from Puerto Rico, to check out the meal program.

“I used to sit in the house doing nothing but being bored,” said Melendez, in Spanish. Now, she said, she enjoys a meal and other activities in the company of friends.

“Sometimes it can be like a party,” said Zatarski, “but we’re helping them stay healthy at the same time.”

One thought on “County Senior Meals Program Has Big Impact”