Bipartisan law will drive up debt and take from general fund for education and other needs.

By Tamarine Cornelius, Wisconsin Budget Project - Nov 6th, 2015 10:16 am
Get a daily rundown of the top stories on Urban Milwaukee

State lawmakers have approved borrowing an additional $350 million over the next two years for highway construction and repair. That approval will drive debt repayment costs higher, take money from a pot intended to support education and health care, and once again put off a permanent solution to paying for Wisconsin’s highways.

When the budget was passed in July, lawmakers included a provision that allowed Governor Walker to seek up to $200 million this year and $150 million next year in additional borrowing authority for highways. On November 4th, the legislature’s budget committee voted to approve the entire two-year total of $350 million in borrowing authority in one shot. The vote was unusual in that it did not fall along party lines: All four Democrats on the committee joined with six Republicans to pass the measure, with another six Republicans voting no. 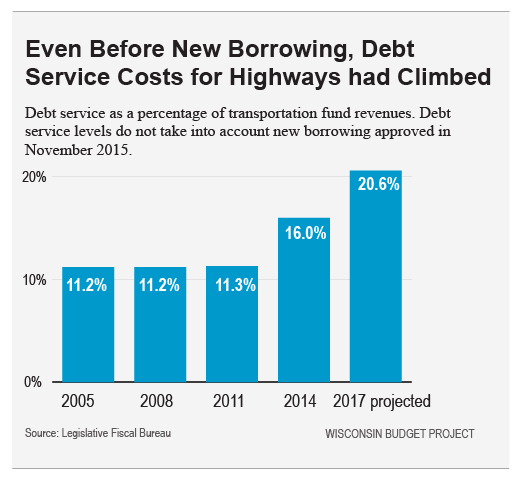 Even Before New Borrowing, Debt Service Costs for Highways had Climbed

(At the ballot box last year, voters approved a constitutional amendment that prohibits lawmakers transferring money out of the Transportation Fund to use for other public services. But the amendment does nothing to prohibit using money from the General Fund for transportation purposes.) 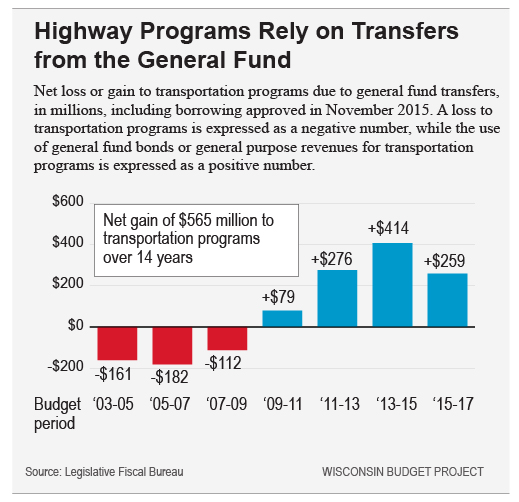 Highway Programs Rely on Transfers from the General Fund

In approving $350 million in additional borrowing, lawmakers chose to make a short-term fix rather than solving the longer-term issue at hand: There is not nearly enough money coming into the Transportation Fund to pay for all the highway projects lawmakers want. Lawmakers froze the gas tax – the main source of revenue for the Transportation Fund – a decade ago, and inflation has eaten away at the tax’s value since then, shrinking the amount of resources available to build and repair Wisconsin’s highways.

As a result of lawmakers’ short-term thinking, a large share of future Transportation Fund revenues will be committed to highway projects already completed, and Wisconsin will have fewer resources to support our schools, communities and families. Rather than pushing costs off into the future and taking money from the General Fund, lawmakers should take a hard look at either increasing the gas tax or scaling back highway projects.

One thought on “Legislators Borrow $350 Million for Highways”