By Marlita Annette Bevenue, Milwaukee Neighborhood News Service - Nov 5th, 2015 10:23 am
Get a daily rundown of the top stories on Urban Milwaukee 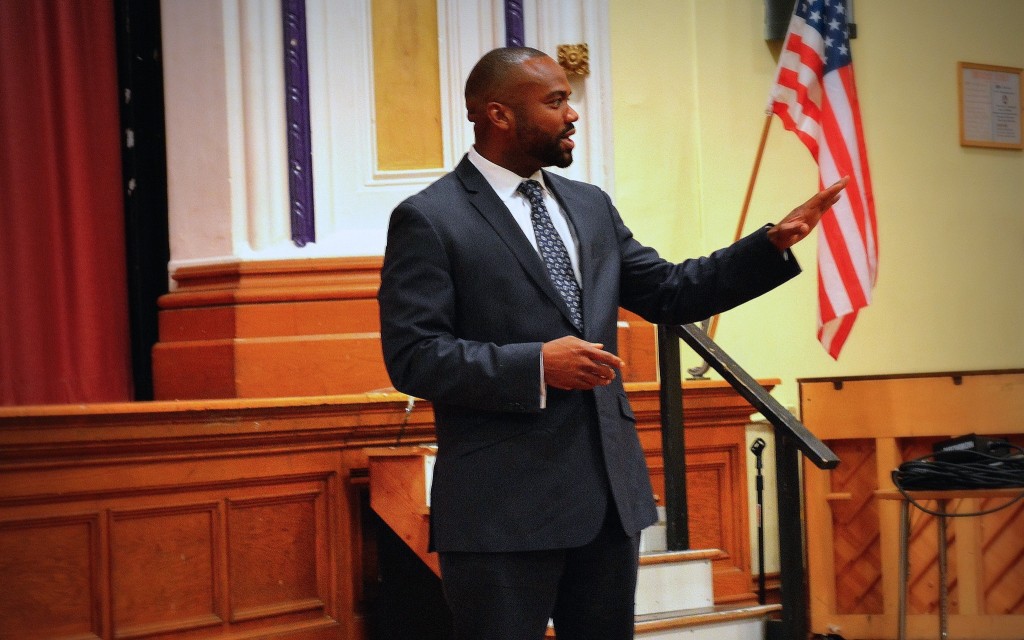 A small group of Sherman Park residents took the opportunity last week to share frustrations ranging from broken streetlights to a need for more police in the area at a town hall meeting hosted by 15th District Ald. Russell Stamper. But the majority of the meeting at Washington High School, 2525 N. Sherman Blvd., revolved around the topic of empty homes and vacant lots in the neighborhood.

One resident noted that vacant lots have become a place where young people congregate and hang out, which is intimidating to some neighbors.

“I live near two vacant houses,” said Camille Mays. “The grass is high in those lots and there’s garbage everywhere, and that attracts rodents.” Mays said she believes in meeting with city officials to keep them informed about neighborhood issues. 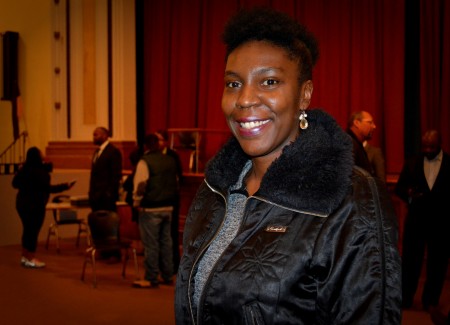 Camille Mays attended the town hall meeting to voice her concerns regarding neighborhood development and vacant homes in the area. Photo by Marlita A. Bevenue.

“I come to as many community meetings as I can,” Mays said. “It’s important to gather with other concerned neighbors, and it’s important to show your aldermen and city leaders that you care about what’s going on in your neighborhood.”

“It wasn’t always the case that the city was the best neighbor when it comes to maintaining those vacant lots,” said Marcoux. “We didn’t really take care of them that well. But now the city’s forestry operation is in charge of this, and that department is working hard to make sure those lots are cut, they’re maintained and the trash is picked up.”

Marcoux also pointed out that the city is making progress in refurbishing many of the abandoned properties and getting them back on the market for people looking to purchase a home.

“The city sold over 400 homes this year. These were vacant properties that now have families living in those houses, adding to the quality of life on that street,” said Marcoux. “Many of those homes that were sold were recycled right here in Ald. Stamper’s district.”

Residents also raised concerns about drug dealing in the area. Stamper encouraged them to report all suspicious and criminal activity to the police and continue to contact him directly to discuss public safety problems.

After the meeting, Gregg Vosswinkel, a code enforcement officer from the city’s Department of Neighborhood Services met individually with residents who complained about vacant properties. He took notes on the locations of the unoccupied homes and vowed to investigate.

“This is why I come to these meetings — to see, in person, who I need to talk to and work with to change our community for the better,” said Mays. “I’ve noticed that when you do have a complaint, all you need to do is contact the right person from the right department, consistently follow up with the contact, and they do work with you to come up with a solution.”