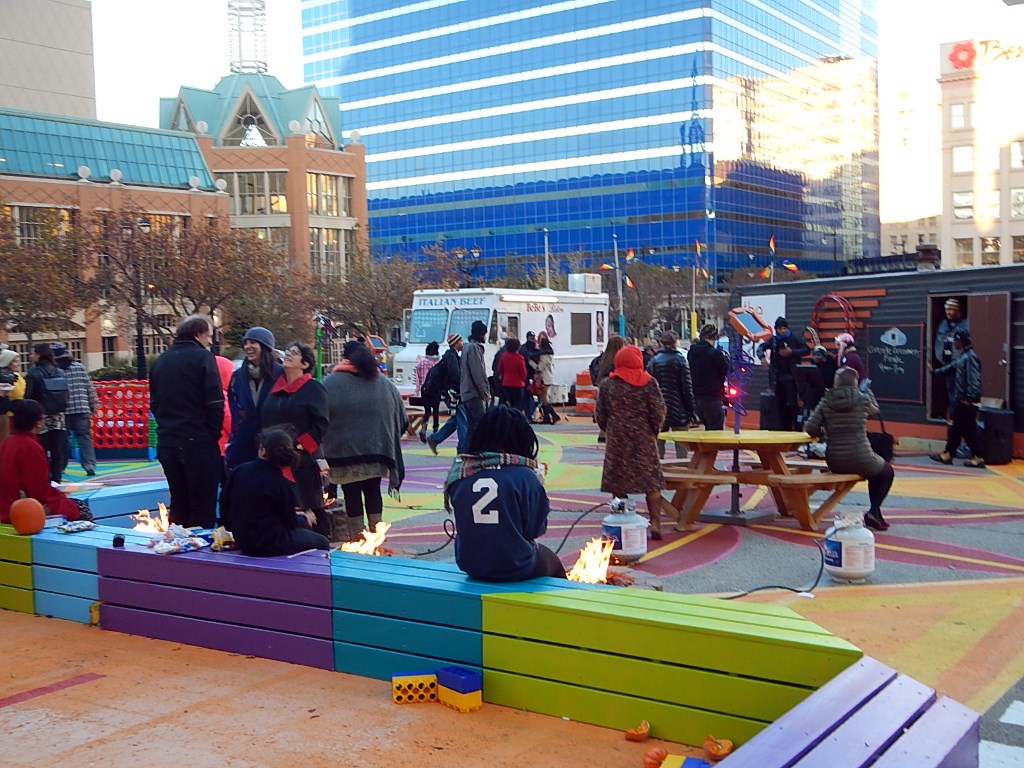 When we last wrote about The Spot 4MKE, it was July and the project led by Creative Alliance Milwaukee had done a colorful transformation of the dismal surface parking lot on 5th St. and Wisconsin Ave. The July 22 event includes games, food, drumming and other activities, but as I wrote, the debut of The Spot 4MKE was “was modest at best, with only a handful of things to do and see.”

Last Thursday brought forth Fall on the Spot, a presentation meant to commemorate the success and future potential of the project.

But beforehand, Maggie Kuhn Jacobus, President and CEO of Creative Alliance Milwaukee invited friends and partners to discuss the success of The Spot 4MKE and what it has in store for the future, while providing a stellar view of the space from the 5th floor of the Hilton Hotel. Most of the presentation was devoted to explaining their creative problem solving process and inspirations from other cities. As we’ve previously written, other urban places have faced similar problems as Wisconsin Ave., but are now vibrant places, including Campus Martius and Cadillac Square in Detroit, which features a beach area full of sand for people of all ages; Les Berges in Paris, which features seating so comfortable you can take your shoes off; and the Flying Grass Carpet in Belgium which offers people a comfortable, ornate carpet made of artificial grass for picnics and games. Jacobus also offered some information pointing to the future of the project.

Jacobus first applauded a group known as Concrete Dreamers, made up of Mikal Floyd-Pruitt and Fondé P. Bridges, for their work over the past six weeks of their residency in creating pinwheel towers, planters, programing, a “dream pole” designed by Vedale Hill and a new ground mural designed by Tia Chianti Richardson.

“We recognized there was this opportunity to symbolically capture that you can create dreams that are concrete,” said Bridges. “You can also, on concrete, create dreamlike experiences.” The groups formed out of the residency at the Hilton Hotel. Jacobus and Carol Voss, CAM’s Director of Communications and Special Projects, approached the group and introduced the opportunity to them.

The flower mural outside was created with the help of volunteers and was based on sacred geometry. “What you see when you look outside, you see the mural and you see those six petals, what’s hidden in the design is that to create those six petals you need seven circles,” Bridges said. “Once you get to three circles, you can make the triangles that you see outside by using the center points. So there are all these different elements that are outside that are kind of hidden in the beauty but natural to our world.”

You can check out their work in action here.

Jacobus announced that the group is now raising funds for a challenge grant from the Richard and Ethel Herzfeld Foundation. According to a news release, the grant is meant to “leverage additional investors and foundations to support initiatives of Creative Alliance Milwaukee… including The Spot 4MKE” and contributions received through December 15th will be matched on a one-to-one basis by the foundation, up to a total of $50,000 from Herzfeld and the $50,000 match, for a total of $100,000 going to Creative Alliance.

Jacobus said she hoped that individuals, corporations and organizations now “understand how critical The Spot 4MKE, because of its location, is for our entire community. We hope that we have now demonstrated that this can work, that activity can happen here, activation can happen here, and that, as it gathers momentum, that other funders would join in.”

Creative Alliance also received a Class B Tavern license over the past summer. Jacobus said that they don’t expect to open a full tavern on the spot, but they can still serve wine and beer at events. In fact, she’s looking into incorporating local brews for winter events. “We do like to drink beer here in Milwaukee,” Jacobus said.

According to the news release, The Spot 4MKE also received a lease extension for the next 6-12 months from the Redevelopment Authority of the City of Milwaukee.

“I thinks that’s always been part of the vision,” Jacobus said. Permanent infrastructure allows people to enjoy the structures 24/7 while the temporary infrastructure requires more maintenance and staff to make sure that it’s stable and brought in and out of the space.

After the meeting, a poster board was plastered with suggestions written on sticky notes, ranging from used book sales, yoga classes and beach days in warmer weather and hot chocolate vendors, snowball fights and a curling rink in winter. Personally, I would love to see a movie night similar to Fish Fry and a Flick in the summer and a snowman-making contest in the winter. 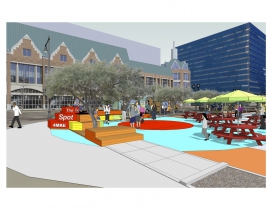 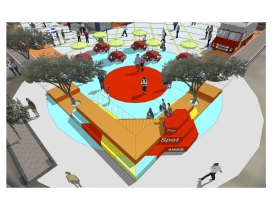 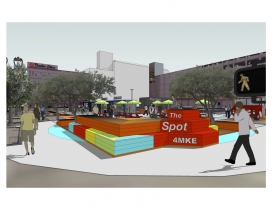 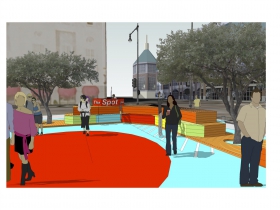 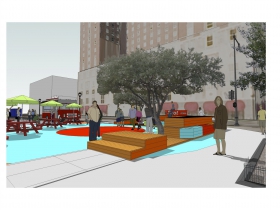 Fall on the Spot

As for the event on the space itself that night, the event drummed up a modest number of people, but was a lot more vibrant than the space’s very first event in July. Many more activities were present to entice onlookers and entertain guests. MagneTag, which I covered here, gave guests young and old the opportunity to engage in some swashbuckling action. A few giant Lego™ blocks and mini pumpkins created the basis for some pumpkin bowling. Guests were able to warm up near a fire pit and even toast some marshmallows. Rounding out the event was face painting, music by D’Amato, a dance performance by Cedric Gardner of So You Think You Can Dance? and even karaoke complete with back-up dancers.

Another poster board after the meeting asked guests “The Spot 4MKE is..?” One person said “full of promise,” and another said “already active.” What did I write? “Slow yet steady.”

The Spot 4MKE has potential. Yet the space is slow in catching on, drawing only a good handful of people with each event. I can imagine people getting frustrated that the space isn’t attracting more activity despite all the hard work and money that went into it.

Personally, I’d love to see the entire surface parking lot turned into The Spot 4MKE, not just a fraction of it. Though the space is colorful and vibrant, it’s still surrounded by a dull, gray parking lot packed with cars. It would also attract more people if there were more things to do on a bigger space.

Creative Alliance, though, remains very confident and deliberate in their approach to the space. As Jacobus said, it’s an iterative process, continually growing and evolving.

How would you answer the question of “The Spot 4MKE is…?” What should be added to The Spot 4MKE for the summer and winter? Feel free to comment below. 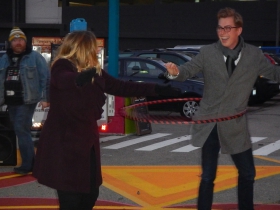 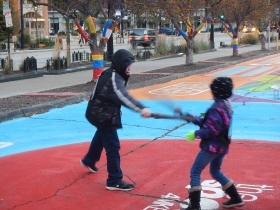 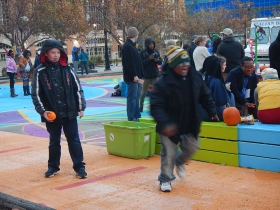 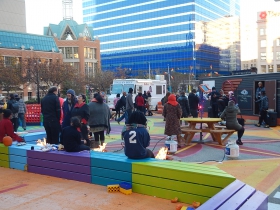 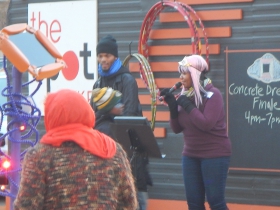 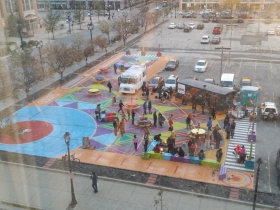 11 thoughts on “Growing Pains for The Spot 4MKE”