Creative Alliance Milwaukee has plans to activate 4th and Wisconsin. Will they work? 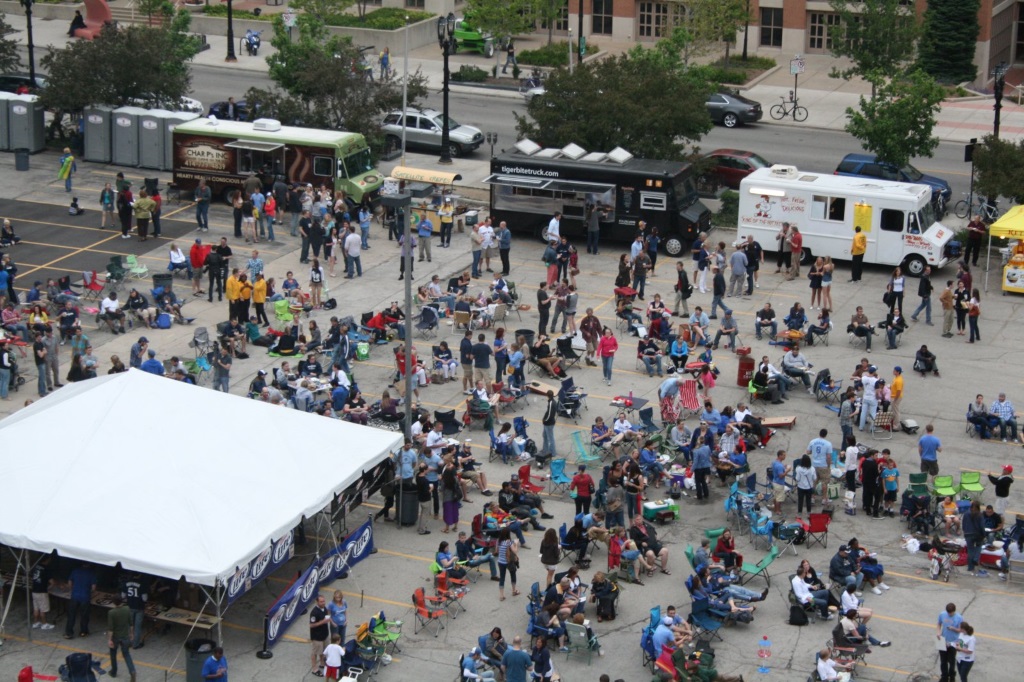 Maggie Kuhn Jacobus calls this area of Downtown area a “black eye” or even a “black hole.” Creative Alliance Milwaukee or CAM, the group she serves as President and CEO, has targeted the city-owned, empty lot on N. 4th St. and W. Wisconsin Ave. for some kind of temporary development or activities to create a public square and increase the vibrancy of the area. The group has developed a plan for the next two to five years.

Long considered the heart of Downtown, 4th and Wisconsin has declined from its peak days: photos from the 1930s through 1950s show thousands of people thronging the street. Nowadays, the empty lot looks forlorn: Cigarette butts line the perimeter of the cracked and lumpy blacktop and only a few trees along the wood chip-covered ground along W. Wisconsin Ave. add some beauty. This has become an area to pass quickly rather than a place to linger.

But it still has potential. There have been many successful events in the surface parking lot. Last summer’s Night Market (photos from the event) hosted by NEWaukee took the area by storm as citizens flocked to browse the many art and food shops as well as the local music and family activities. The Downtown Baseball Block Party in 2012 hosted by WAM District allowed citizens to tailgate as they enjoyed a Milwaukee Brewers game from an outdoor movie theater. The space also held IndyFest for a number of years; race fans enjoyed live music as they ate and even got to meet some IZOD IndyCar Series race drivers, including Michael Andretti, for autograph sessions. Yet when these events ended, the area went back to being a black hole. 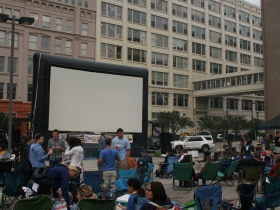 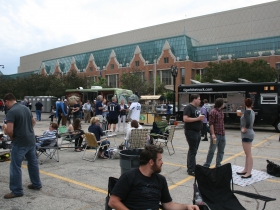 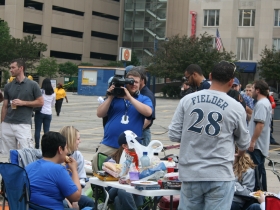 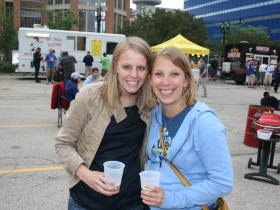 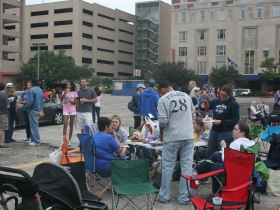 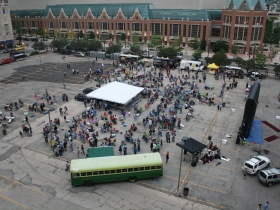 CAM’s plan, rather than committing to a capital-intensive, permanent development, calls for setting up temporary, adaptable, reusable structures for smaller businesses (similar to the structures found in Christmas markets in cities like Chicago). They will section off an L-shaped section of the surface parking lot to use for businesses 24/7. They also plan to set up a music stage, sound equipment, kiosks, movable furniture, food trucks, and fire pits for winter events like a Christmas Market. CAM has requested a special event permit from the Redevelopment Authority of the City of Milwaukee to use the L-shaped space from 6 am on May 21 to 10pm on October 31.

The idea is a a Lighter, Quicker, Cheaper (LQC) development, as the group dubs it, that fosters significant transformation of an area at relatively minimal cost. The adaptability of the structures also allows for a year-round, trial-and-error period where CAM can experiment with different layouts and businesses in order to solve problems as they arise. The adaptability also allows for the shops and services offered in the area to better connect with and complement the people, places, and events already around the area, like the shops of Grand Avenue, the Wisconsin Center, and the Hilton Hotel. CAM hopes to attract businesses from all around the Milwaukee area to provide samples of their products, so that people sampling a product from, say, a business in Washington Park may be encouraged to visit the company and its neighborhood.

The process of experimentation with this LQC development may lead to a more permanent structure as optimal layouts are found and as more money and interest is created in the reactivated city lot. “It will be simple, but that’s the idea,” Jacobus says. “We test, we test, we test. We see what works, what sticks, what people like and we create more of that. We see what people don’t like and get rid of, or minimize, or change that.”

The team also hopes that the area can become an “incubator for microentrepreneurs,” as Jacobus puts it. One of CAM’s partners is Kiva Zip, an international organization that offers no-interest loans to small businesses that wouldn’t otherwise be able to get one. The team is considering setting up a Kiva Zip “bazaar” so that businesses funded by the organization can “have a downtown presence through the pop-up location on the lot,” Jacobus says.

CAM applied for and received a $100,000, Southwest Airlines Heart of the Community grant, which selects projects that create places that “are people centric, that showcase what’s authentic about the community, and become a platform for local talent,” Jacobus explains. Milwaukee is one of six cities in the U.S. to receive the grant. The project has also gained another $100,000 of in-kind support, technical assistance, and workshops from Project for Public Spaces. CAM also hopes to receive support from larger corporations and national chains, yet the shops and services offered in the area will be strictly from smaller local businesses.

CAM developed the plan by soliciting community input, investigating patterns of use in the built environment of the area, and looking at successful spaces in other cities. “Creative Alliance Milwaukee exists to drive economic prosperity,” says Jacobus, “And in particular, it’s to raise the visibility of creativity and the creative skillset in the southeast Wisconsin region.”

The Wisconsin Avenue Marketing Development Corporation was looking for ways to revitalize the area around N. 4th St. and W. Wisconsin Ave. They contacted CAM and initially asked them to run a contest to come up with ideas for what to put there. CAM then set about to create a creative problem solving process. The project was dubbed 4MKE, to underline that “this was an initiative for all Milwaukeeans,” a CAM report notes.

The 4MKE team spent ten months collecting info from “in-person community discussions, public art input opportunities at community events, online surveys, in-person surveys and one-on-one interviews” according to the report. They managed to receive input from “more than 1,700 members,” including Milwaukee citizens of all kinds of backgrounds and disciplines as well as key stake holders in the area (such as the executives of Grand Avenue or the Hilton hotel). One way they received information from the public is by asking open-ended questions, such as “The heart of Downtown is…?”

“Some people would write ‘dead’ or ‘unsafe’,” says Jacobus. But others were more positive, saying things like “full of possibility” or “waiting to happen,” she notes.

Chris Socha of The Kubala Washatko Architects, Inc. led a process during the discovery period called “pattern language” to find out how the built environment of the area can change to better increase pedestrian vibrancy. The biggest takeaway was that a poor design contributes to how people feel about an area. They identified six different patterns affecting the area around Fourth and Wisconsin: the lack of a seamless network between places places to go around Milwaukee (within a 5 minute walk), large block sizes (bigger than 200 feet by 200 feet) that limit accessibility, lack of network connecting to supporting streets like N. 5th St. and Michigan St., superblocks like the Wisconsin Center that create voids in the area, wide open streets that make people feel unsafe (it’s optimal when the city’s height is equal to its width), and the lack of sights and active spots that encourage pedestrians to pause, wander, and return.

In addition to the six patterns outlined above, the analysis also uncovered other problems with the area according to the report. They’ve found that people are discouraged from going outside during winter, there is a lack of green space in the area, a lack of food options in the area, a lack of residential options that connect to the area, and a lack of small-scale services from local businesses.

A presentation by PPS during the workshop gave examples of a variety of places that have had much of the same problems as Wisconsin Ave., but are now vibrant places, including Campus Martius and Cadillac Square in Detroit, Michigan which features a beach area full of sand for people of all ages; Les Berges in Paris, France which features seating so comfortable you can take your shoes off; and the Flying Grass Carpet in Belgium which offers people a comfortable, ornate carpet made of artificial grass for picnics and games.

CAM hopes that the targeted area can “become a gathering place for all Milwaukeeans, across race, age, profession, religious beliefs or ethnicity, a rarity in Milwaukee,” according to the report.

“It’s time for some CPR [to] get the heart beating again,” says Jacobus, “4th and Wisconsin is a big piece of the puzzle to getting that part of Downtown activated, beating, vibrant, and life giving again.”

CAM expects to begin getting the blood pumping on Wisconsin Avenue this summer. You can check out Creative Alliance Milwaukee’s website for more information.

4 thoughts on “How to Fix Wisconsin Avenue’s Black Hole”