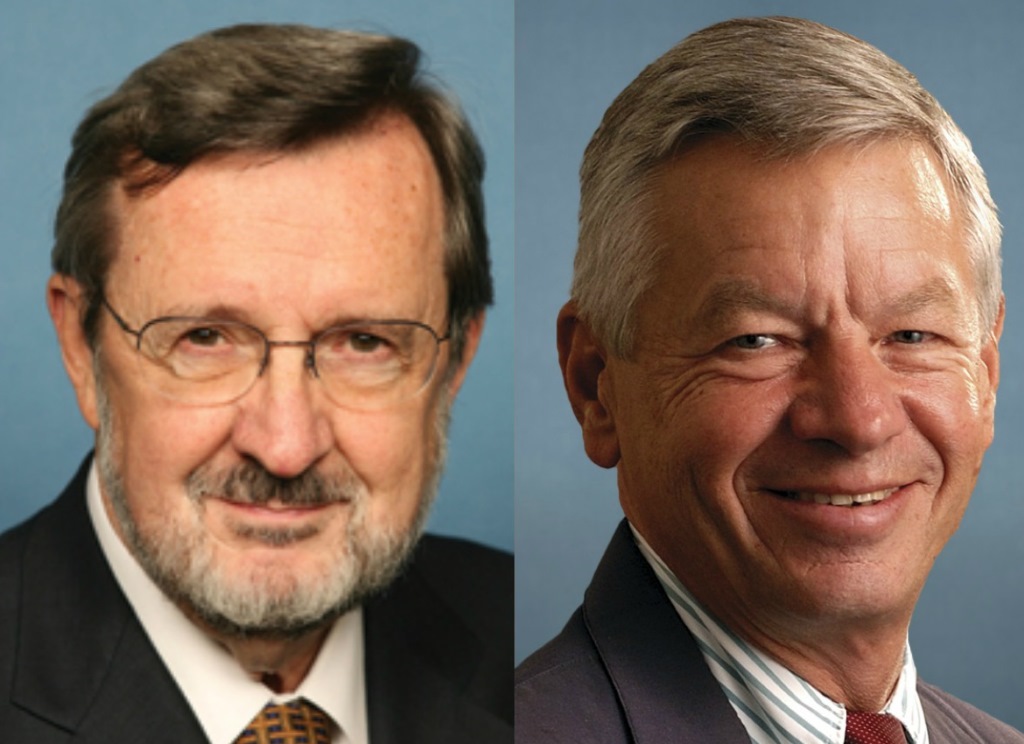 Two retired veteran congressmen — one a Democrat, the other a Republican — reached bipartisan consensus on an important issue.

In the words of Democrat Dave Obey, “We live in a very different political era,” from when he and Republican Tom Petri served in the House of Representatives.

To give you an idea how much — and how rapidly — this new era has been thrust upon us, consider that Obey served as recently as 2011, while Petri served until January of this year.

The pair appeared in Milwaukee as part of the Obey Petri Civic Participation Series which they launched this spring through the Wisconsin Institute for Public Policy and Service, which is affiliated with the University of Wisconsin Colleges and Extension. The group’s work is based on two core ideas: “1) We support citizen-centered democracy and 2) We embrace the Wisconsin Idea.”

The “Wisconsin Idea,” you might recall, was one of the items that was to have been struck from the University mission by the Walker administration, and was only withdrawn after public outcry. This alone is an example of our very different political era.

The two spoke at a “Green Tie Gala” at Discovery World, a fundraiser for the League of Conservation Voters. Obey and Petri, with their bipartisan road trip “advocating for strongly held policy positions without excessive partisanship,” were a good choice to speak in front of the members of the organization, which draws its support from both parties.

Petri said that when he took office in 1979, he received an invitation to luncheon from Obey, who had been in congress since 1969. He and Obey, with their spouses, traveled together and were able to work collegially on a number of issues, including environmental ones. Their differences were a matter of degree, not of kind, Petri said.

He used as an example the obvious need to clean the waters of his district, which had long been polluted by industry, particularly from paper mills.

But Petri found some of the government regulations too onerous. For example, a requirement that water discharged to a river be cleaner than when it entered the plant.

Obey tackled the environmental issue directly as an example of how the culture in politics has changed in just years. Speaking of politicians at the state and federal level, he said, “Lots of people believe government should not be in conservation.”

Not only that, Obey said, “They feel government should not be involved in anything.”

Obey came to his environmental awareness at a young age. Whereas there are elected officials today who refuse to believe the findings of scientists on environmental issues, for Obey, science has merely confirmed what was obvious to him as a child.

“My grandma lived three blocks from a 3M plant,” he said. When it came time to sit out on the porch, it had to “be wiped down all the time,” due to the dust. “So I knew about airborne pollution,” he said.

Obey went on. “I would go out fishing on Lake Wausau with my grandfather. If we caught anything, we’d have to throw it back, because the lake was raw sewage,” he said.

“I didn’t need any scientific theories about why we needed clean water.”

Despite the adverse political climate, groups like the conservation voters have a strategy that has led to some notable successes. Despite the political stranglehold of Wisconsin by the Republican party, the group saw “50 percent of our pro-conservation bills signed into law, and we were able to defeat 75 percent of the worst anti-conservation bills that came before lawmakers,” according to a report by Tom Stolp, the Milwaukee-based Field Director for the group.

“Nonpartisanship can be a tall order, especially in present-day Wisconsin. But we are absolutely committed to it. … The only sustainable solution is to make sure natural resources consistently rise above the political fray. … To do that, we start with the firm belief that having a “D” or an “R” after your name doesn’t predict how you will vote on conservation issues.”

So that’s a start. But how to implement it?

Obey used a general example of how to get the vote of a member of an opposition party who might be inclined to support your cause. You don’t just ask him for his support — not if it’s going to get him in trouble with his party bosses. Instead, “put pressure on the leadership to give them room.”

“You’ve got to work with them, instead of clubbing them,” Obey added.

Just to show how much things have changed politically here, Obey concluded with this observation:

“You have to help re-elect Republicans when they stick their head up.”

The congressmen were followed by brief remarks by Kerry Schumann, the Executive Director of the League of Conservation Voters. She is in the trenches, and speaks in military terms.

“The legislature has fought us and we have fought back and stopped the worst of the attacks,” she said. “But that is not enough when there are new attacks every day.”

And these are sometimes sneak attacks. In a “Recipe for Victory,” printed in its Conservation Scorecard 2013-2014, the group showed again how the legislative process had degenerated since the old days of Study Groups, Scientific Reports, Executive White Papers, Governor’s Blue Ribbon Commissions and other now lost mechanisms of the bipartisan process.

“We see it time and again — legislators seek to pass complicated, unpopular, anti-conservation legislation by shepherding it through the legislative process as quickly and as quietly as possible.”

In the late afternoon of October 16th, 2013, according to the report, “Senator [Tom] Tiffany introduced SB 349 with no prior warning.” By that evening, Wisconsin League of Conservation Voters had completed an analysis of the bill, drafted talking points and alerted its members.

The members responded with letters to their legislators, while the group kept a close eye on committee calendars. Ultimately, lacking the votes, Tiffany was obliged to let the matter die. When he resurrected a watered-down, but still unacceptable version of the bill later in the session, it too failed.

Schumann then announced a campaign called “New Vision Conservation 2020.” The goal is to raise funds so the group could “move from defending to going forward,” she said. “We want to get it right and do it right the first time. Non-partisan, unifying, not dividing.”

The event drew over 200 to Discovery World where Bartolotta catering provided walk-around delicacies and a do-it-yourself buffet including a delicious 5-year old cheddar from Carr Valley.

Among the attendees was Mayor Tom Barrett, himself a former Democratic Congressman who served alongside Obey and Petri in the good old days. Supreme Court Candidate Joe Donald also made an appearance, as he tends to do everywhere. Legislators included Democrats Rep. Evan Goyke, Rep. Daniel Riemer, Rep. Mark Spreitzer and Sen. Chris Larson along with Republican Rep. Joel Kitchens, who represents Door County, a very popular area for conservationists of both parties. The event received some big money support from the Brico Foundation and from its head, Lynde Uihlein. Also present was Wisconsin Gazette publisher and real estate investor Leonard Sobczak, also a Democrat. Both he and Uihlein have significant private landholdings that they maintain as nature preserves. Wisconsin Gazette salesperson Logan McDermott was there, having survived a collision with a balky cabinet while doing apartment maintenance, as his bandaged brow attested.

Obey and Petri had been introduced to the group with opening remarks by John Stollenwerk, the former owner of Allen-Edmonds shoe company of Port Washington, and a conservationist.

Stollenwerk knows a thing or two about bipartisanship — every president since Ronald Reagan has worn Allen-Edmonds shoes, with Reagan, Clinton and the two Bushes wearing them for their inaugurations. Petri himself was wearing Allen-Edmonds shoes at the event. George W. Bush even toured the plant in 2006.

Stollenwerk spends a good deal of time in Switzerland, he said, where “conservation is not an issue,” but a given. Why is that not so here in the United States?

Stollenwerk mused that it might have been because of our lore of the limitless “wide open spaces.”

But these spaces are not as limitless as once thought, and what now seems to be limitless is the sprawl of suburbanization.

He mentioned flying over Phoenix and marveling at the mile after mile of development on the fragile desert. “What are we doing with our resources?” he wondered. 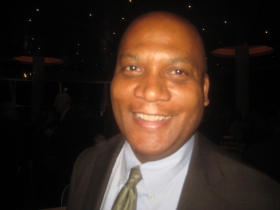 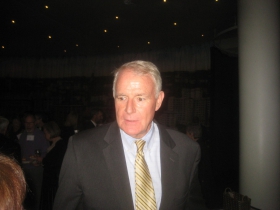 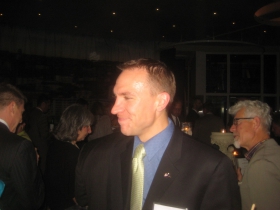 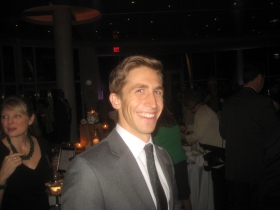 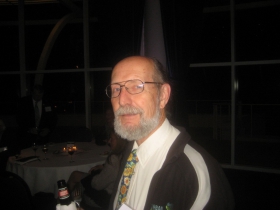 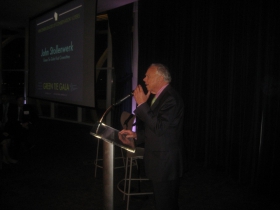