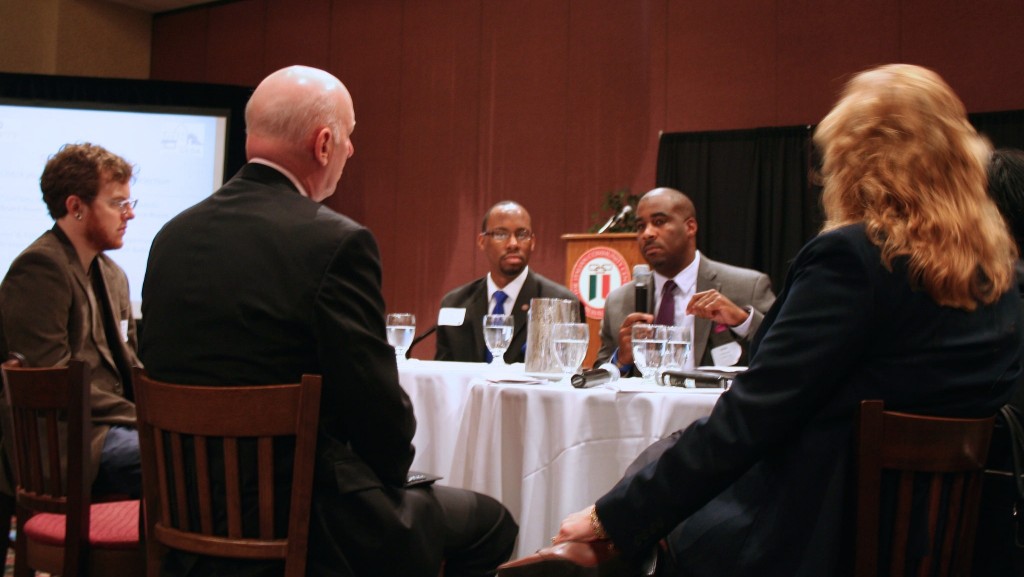 At a recent summit meant to tackle the high black male unemployment rate in Milwaukee, black leaders said the problem is rooted in racial discrimination, compounded by lack of access to job opportunities and lack of outreach to black communities and individuals.

“[Equal opportunity] is a very basic principle — we all say we live by it,” said Ald. Ashanti Hamilton. “Matter of fact, we swear by it in this country. But, often times, we’re unwilling to admit that we have structures in place that were designed for the specific purpose of keeping folks out of the process.” Hamilton addressed a crowd of more than 150 public sector, nonprofit and corporate professionals.

The summit, hosted by the Urban Economic Development Association of Wisconsin (UEDA), was part of an annual summit series. UEDA Executive Director Kristi Luzar said the summits, which have previously focused on transit and business corridors, are “outcome driven” and topics for breakout sessions (known as labs) are chosen through feedback from members, partners and the City of Milwaukee. Luzar said takeaways from the event will be incorporated in a city report that will inform the work of the Black Male Achievement Advisory Council and the federal My Brother’s Keeper Community Challenge in Milwaukee in 2016.

Mayor Tom Barrett spoke of a “renaissance” in downtown Milwaukee, touting the new Northwestern Mutual development and future projects, such as the new Bucks arena, The Couture development and a recently approved streetcar project. He also noted some successes of the Residents Preference Program (RPP), which mandates 40 percent participation of underemployed and unemployed workers on projects that receive more than $1 million in direct financial assistance from the city. Barrett pointed out that, for many unemployed individuals, some of the best jobs are in construction.

Barrett said the challenge is to “ensure that the people who live in this city, particularly in the economically distressed parts of the city, play a role.” He said the city has to do a better job of making sure the opportunities that are available are also accessible. 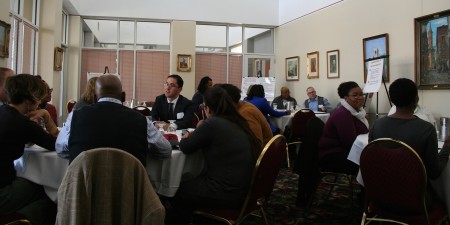 “There’s an economic imperative. There’s also a social and a moral imperative that we do a better job of making sure that people have an opportunity to support their families, just as we all want to support our own families,” Barrett noted.

A mixed-race roundtable discussion that included professionals in academia, construction, healthcare and the public sector, attempted to unpack the issue, touching on the skills gap and exploring nontraditional educational pathways, thinking creatively about employing black males and addressing the issue of confidence.

Kalan Haywood, founder and president of Vangard Group, a developer headquartered in Milwaukee, suggested a larger issue is how to get the word out to men of color about job opportunities. He noted that Vangard has implemented the RPP requirement on projects that don’t receive city funds, saying “it starts at the top.”

“How dare I build a project in the city and have young boys and men (of color) walk by it, drive by it and not have opportunity to be part of the development,” he said. “We have all these numbers about jobs that they never hear about. So, we have to find a way to meet them at a position and a level that they understand, that they’re comfortable with. The onus is on us to make sure we expose them to opportunities.”

And, UWM Professor Marc Levine pointed out that, although the “project economy,” automation and skills issues exist across the country, black male joblessness is particular to Milwaukee. He said cities such as Raleigh and Charlotte, N.C., Boston, Washington D.C. and Atlanta have “substantially lower black male non-employment (joblessness) rates.”

He added, “It isn’t like everybody’s got to be a rocket scientist to get a job,” noting, “most projections show that almost two-thirds of the growth in jobs over the next 10, 15 years are going to be in jobs requiring a high school diploma or less.”

Jamie Elder, who works with the Wisconsin Department of Children and Families, criticized the Milwaukee Metropolitan Chamber of Commerce (MMAC) — the only major local business association that did not support the event. “They’ll do trade missions to China, they’ll do trade missions to everywhere else in the world but they won’t cross Vliet Street, they won’t cross Walnut.”

Reggie Moore, founder and executive director of the Center for Youth Engagement, said one of the reasons individuals don’t have access to employment opportunities is a lack of connections. “Who you know gets you in the door, what you know keeps you there. But, if you don’t even have access to opportunity, you can’t even get in.”

Moore added, “I don’t think there’s a question on whether race plays a role.”

Shanyeill McCloud, of Clean Slate Milwaukee, which helps ex-offenders expunge their criminal records, left the summit halfway through because she said the people being talked about weren’t represented.

“I can’t even stomach it,” said McCloud, who was in a breakout session focused on education and barriers to employment. “They’re not talking about the real issues.”

Luzar said UEDA, who she described as “a convener,” tried to get individuals who fit the target demographic at the event but admitted that holding the summit during the day may have been a barrier because of jobs or other commitments. She said that although stipends were offered, the time commitment was substantial and the subject matter is complex. “What we rely on, to some extent, is that the people in the room are getting that feedback (from unemployed black males) already.”

But Haywood said there’s nothing better than going directly to the source; for example, doctors would always want to examine and speak directly to the person they’re diagnosing.

“We could come up with the cure, right now, for back pain,” he said. “Then we’re going to go out to the community and talk to the people that we’re trying to serve and they’re going to say, ‘Well, it’s not my back that was hurting. I had a headache,’ or ‘I had a knee-ache.’ We need to get the people at the table to at least deliver to us what the true issues are.”

This dynamic was on display in the entrepreneurship lab where Milagro Jones, a recent hire at Public Allies who has been homeless for the majority of his life and has been incarcerated twice, helped to steer the conversation. The session touched on the need to reach out to individuals where they are and the need for organizations working in the community to be accountable, among other topics.

The summit was a positive experience for Jones, who said that in rooms full of professionals, he often comes in thinking that people don’t like him or want him there. “You could almost call it a paranoia,” said Jones. “I look like the people that I see being oppressed all over the world,” whether it’s someone who is killed by a drone or shot by a police officer and forgotten.

“I feel unwanted; I feel unloved by society,” he said, adding that people working with black males in Milwaukee, “need to be honest with themselves … and stop trying to hide from the truth and the reality,” referring to the plight of many African-Americans.

Brandon Rule of Forward Community Investments, a mission-based small business lending firm, noted the reason many of his counterparts are in prison is for dealing drugs, which he equated to an entrepreneurial business. “Clearly, we have a plethora of black entrepreneurs,” Rule said. “So, how do we go about changing what we view as entrepreneurs and not scolding them for being entrepreneurs?”

Rule, who came from an impoverished background, said he is grateful that he and Jones were able to connect, calling it a mentorship opportunity. “Today was a way for me to talk to him, for him to learn and for everyone who was in that room to understand what we go through on a daily basis,” he said, emphasizing that more interactions of this sort are needed.

Haywood added, “Anybody can dig themselves out of a hole if they see somebody they can relate to.”