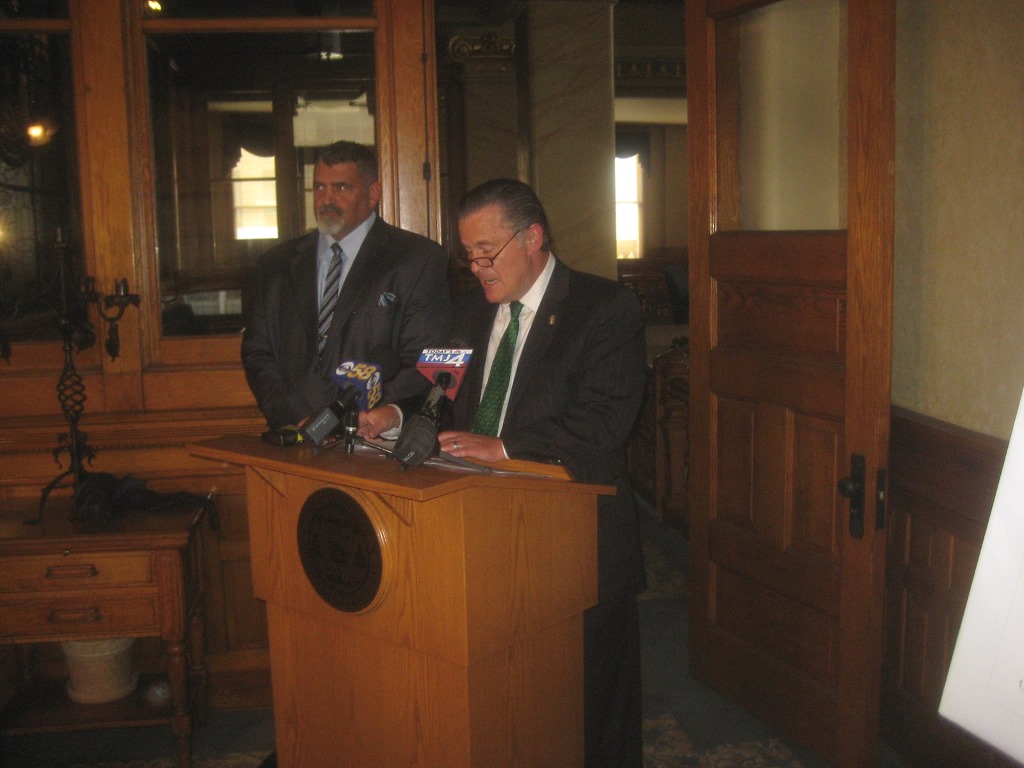 Bob Donovan, the 8th District alderman who is also running for mayor, says as he has been travelling through the city lately, and when the topic is the police, he says hears this persistent complaint from residents:

“They don’t want more chiefs. They want more Indians,” he said, adding, “No offense to the Native Americans.”

Donovan made his remarks in the Common Council chambers anteroom in City Hall Wednesday, October 28th in a press conference he held to call for an additional class of 50 police officers to begin training in July, 2016, and to hit the streets in mid-2017.

“We desperately need more personnel,” Donovan said of his proposed $2,236,321.47 amendment to the city budget. It is to be introduced Friday, October 30th at the Finance and Personnel Committee‘s Budget Amendment Day and will go to a vote on Tuesday, November 3rd at the Common Council’s Budget Adoption Meeting, he said.

And how are we going to pay for all of these “Indians”?

The answer, according to Donovan, is to get rid of the chiefs. His amendment would do that by a plan to “eliminate senior command positions. … Get rid of some commanders and hire more officers.” This would provide “Total Offsetting Reductions” of $2,318,071, resulting in a “Net Tax Levy Savings” of $81,749 according to his figures.

The Donovan amendment would eliminate two Assistant Chiefs of Police [$247,332], a Deputy Inspector of Police at the Police Academy [$110,253], a Police Captain [$101.483], a Police Lieutenant in the Property Control Section (“to be replaced by CIVILIAN Property Control Manager” [$91.223, with no offset for civilian’s wage], and one Police Fleet Supervisor [$48,294]. No word yet from Chief Flynn (who once called Donovan a “demagogue” as to how he likes the proposal.

In a most curious proposal attached to his amendment, Donovan would also save $560,098 by delaying a class of 65 police recruits already scheduled to begin during Pay Period 19 [September 4-17]. That class would be delayed until Pay Period 25 [December 11-24].

Those 65 candidates would have to wait until after Donovan’s class of 50 begins its training during Pay Period 15 [July 24 – August 6].

This call to delay an already budgeted class of 65 officers for three months while creating a new class of 50 recruits to jump ahead of them does not seem to fit into an overall coherent plan to increase the size and strength of the police force. It does look like a budget gimmick. And as a publicity stunt to advance his mayoral campaign, since the class of 65 police was proposed by Mayor Tom Barrett and not Donovan.

Donovan’s plan met with the support of Milwaukee Police Association President Mike Crivello. “The staffing has been drastically cut since 2008 under this chief,” Crivello said. Beat officers “routinely have to patrol solo,” he added, resulting in slower responses and greater chance of bodily harm.

“The crooks have gained the upper hand,” he said.

Donovan has gone to bat for the union in the past, and has won some partial victories in increasing the number of police positions authorized in previous budgets, he said. I asked Donovan if he had any additional sponsors to his latest budget amendment.

“Ald. Bohl indicated that he would be a co-sponsor,” Donovan said. Interestingly, Bohl has his own amendment to add 50 police officers late in 2016, to begin service in 2017, as well as to eliminate two supervisory positions [Amendment 31], while Donovan’s had yet to be introduced, but exists only as a Draft Amendment at this time.

Donovan is solely focused on race for mayor and has only one issue — increasing the number of police officers.

That was the message delivered by Josh Zepnick, the Representative to the Assembly who is running against Donovan for 8th District Alderman while Donovan is also running for Mayor.

Zepnick told a group of supporters Monday at Oscar’s on Pierce, 1706 W. Pierce St., that his opponent (whom he did not mention by name) “is solely focused on running for mayor on one issue — more cops.”

As a result, Zepnick said, Donovan is losing touch with his constituents in the 8th district as he canvasses the city for votes for his mayoral campaign.

Zepnick made his remarks at a fundraiser for his campaign. He says he has knocked on some 4,000 doors in the neighborhood so far, and said the issues that matter to the people he talks to include jobs, neighborhood revitalization, and rebuilding the streets — “including public transportation.”

Zepnick was joined by Rep. Peter Barca, the Democrats’ leader in the Assembly, by his colleague Evan Goyke, and by Gary Goyke, his father, a former State Senator. Potential colleague Ald. Terry Witkowski also made an appearance as did Joe Donald, a candidate for Supreme Court who gets around a great deal, Jean Kies, a judicial candidate for an open seat in Branch 45, and Gwen Connolly, an attorney in private practice who in running for an open seat in Branch 44.

Zepnick also hinted that he will have “some good news” from union leader Bruce Colburn who has been “working with the Bucks” on their new arena plan.

“When the Republicans came begging for Democratic votes for the arena,” some deals were struck, he let the audience know. Stay tuned.

Justin Bielinski, the third candidate for Donovan’s seat, also has completed several circuits of door knocking, according to his Facebook page.

He too feels Donovan is using his position to grandstand for his mayoral bid. “My opponent continues to campaign for mayor using official aldermanic press releases bashing Mayor Barrett,” he wrote in a post on October 26th.