Located at 31st and Lisbon, it's an artistic tribute to the old Milwaukee zoo.

By Andrea Waxman, Milwaukee Neighborhood News Service - Oct 28th, 2015 10:31 am
Get a daily rundown of the top stories on Urban Milwaukee 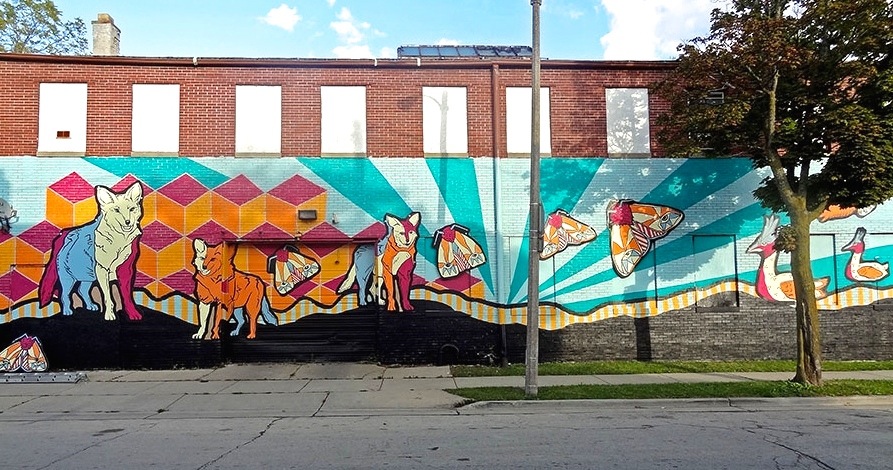 The mural, titled “A Source of Life,” as seen from 31st Street. Photo by Jeff Redmon.

A small crowd of Washington Park residents and community leaders recently celebrated the completion of a mural marking an entryway to the neighborhood. They cheered and clapped as Alderman Russell Stamper cut a ribbon dedicating the mural on 31st Street at Lisbon Avenue.

“(The artists) did a wonderful job with it,” said Lakeitha McClinton, who lives across the street and watched the mural go up with her three young sons.

A resident introduced the idea of visually marking the entry to the neighborhood, said Beth Haskovec, a member of the arts and culture committee of Washington Park Partners, one of the project’s sponsors. 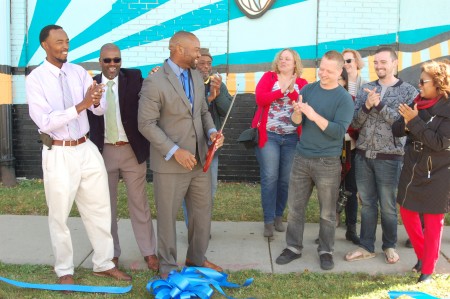 Artists John Kowalczyk and Jeff Redmon, who were selected by the committee from a group of eight, painted the mural during a one-week period in early October. Titled “A Source of Life,” it covers the south and west sides of a vacant, city-owned building at 3044 W. Lisbon Ave.

With a nod to the zoo once located in Washington Park, and inspired by the park’s designer Frederick Law Olmsted Sr., who believed that natural beauty can improve human nature, Kowalczyk and Redmon incorporated wildlife native to the area or in the zoo. The mural depicts coyotes, tiger moths, Great Crested Grebe ducks and polar bears on a brightly colored geometric background.

“The surreal landscape and proportionately huge wildlife give the feeling of a wonderland,” they said in an artists’ statement about the mural.

Interested to discover that wild animals live in the urban setting, Kowalczyk said they wanted to point to the natural beauty surrounding even busy city intersections in the neighborhood.

“I liked calling attention (to these animals) and making everybody see that beauty,” he said.

This mural is just a tiny part of the vision for the neighborhood, explained artist Muneer Bahauddeen, a Washington Park resident and co-chair of the arts and culture committee. 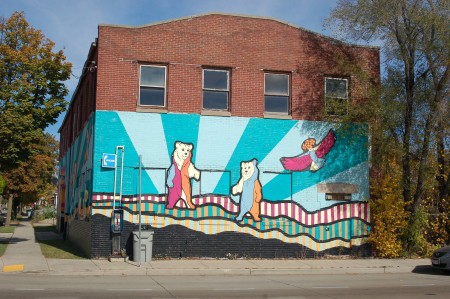 The mural wraps around the vacant building on the northeast corner of Lisbon Avenue and 31st Street. Here it is viewed from Lisbon Avenue. Photo by Andrea Waxman.

“We visualize this being an artisans row from 27th Street to 49th Street on Lisbon,” Bahauddeen said. “We’re encouraging artists and artisans and craftspeople to move into available housing here in the community and keep this initiative going.”

Bahauddeen said that this is an ideal time for people to relocate to Washington Park. It is “the new frontier” for those concerned with urban issues to work with the community using art as a healing tool, he explained.

According to McClinton, the block has experienced some healing since the mural was completed.

Now that there is a mural on the building, “we don’t have to worry about the prostitutes or crack heads standing on the corner,” she said.

She added that it draws attention to the space and “really brings a lot of light to the block.”