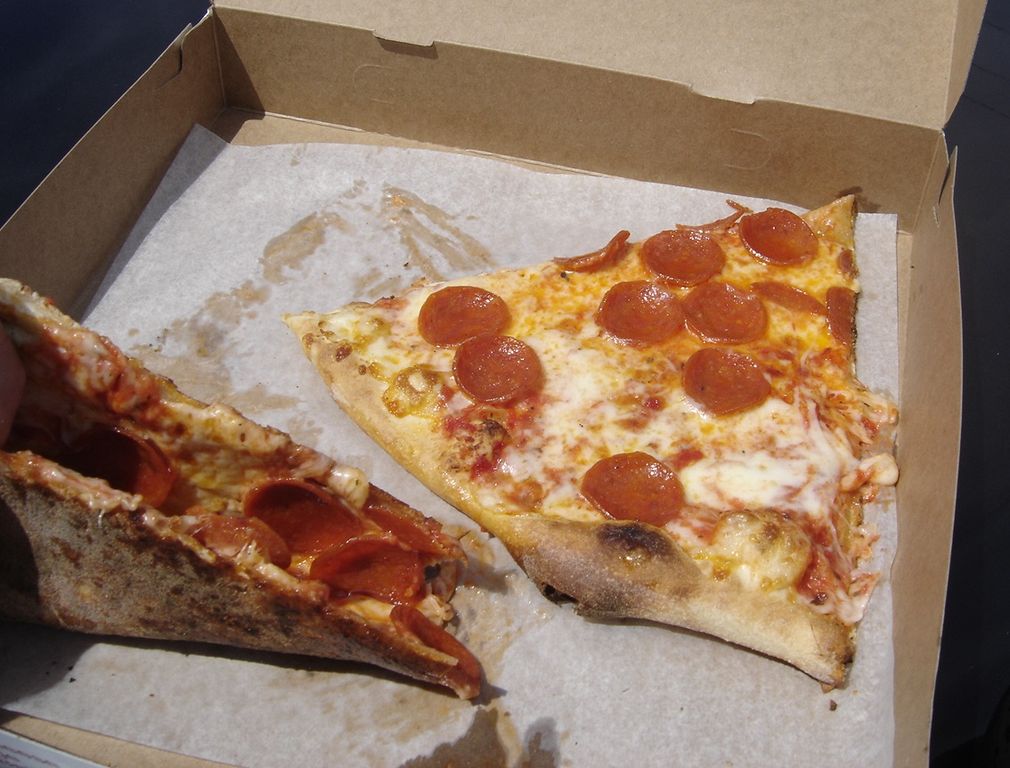 Milwaukee loves pizza, but is it possible to get too much of a good thing?

A new pizza purveyor, Sal’s Pizza, has just opened on 2974 N. Oakland Ave., almost exactly across the street from Lisa’s Pizzeria, the family owned pizza parlor that, as its website notes, “has been offering homemade, fresh pizza and Italian dishes to the Milwaukee, WI area since 1960.” Lisa’s is known for the Milwaukee-style, cracker-like, thin-crust pizza and has a loyal following.

Sal’s is owned by Sal Bekim, a native New Yorker from Brooklyn who told the UWM Post he will be selling “true New York pizza.” If so, it will be thin-crust pizza, but not the cracker style. Rather it will be a little thicker and more yeasty, with slight toughness or pull to the bite.

Sal’s will also offers calzones, Stromboli and deep-fried cheesecake. Pizzas will include ones topped with mac and cheese, spicy buffalo chicken and a smorgasbord of sausage, ham, bacon, pepperoni and mozzarella known as the “Godfather”.

Sal’s and Lisa’s are both located a hop, skip and a jump from the campus of the UW–Milwaukee and Sal’s looks like it is aiming directly at student customers. It offers students with ID 10 percent off a full pizza.

Even though it’s open now, Sal’s will have a “Grand Opening Day” soon where the first 10 customers are eligible for free pizza for a year. We’ll report back as we hear more details.

Curiously, there are also Sal’s pizza places to be found at 2040 W. Wisconsin Ave., in Waukesha, Hartford and West Bend. None of them seem to be related to the new one on Oakland.

As reported in Urban Milwaukee last week, a new place called The Juice Kitchen will be opening in the Innovations and Wellness Commons, at 1617 W. North Ave. The community group Walnut Way developed the commons to encourage healthy eating and bring businesses and nonprofit organizations to the North Side community.

You could hardly get more healthy than the juices owners Maanaan Sabir and JoAnne Johnson-Sabir will be making and selling. Sabir uses all fresh fruits and vegetables for his high-vitamin juices. Sweet potatoes and beets are the main ingredients in the juice “Purple Haze,” which is high in vitamin C and fiber. Another juice contains plantains, dates, coconut, cinnamon and cashew milk.

Other tenants at the Innovations and Wellness Center will include an Outpost Natural Food Cooperative pop-up, offices for the Fondy Food Center and a commercial kitchen operated by the Milwaukee Center for Independence which opened in August.

Maanaan started sharing his juicing information with the clientele of Sabir’s Karate & Fitness at 4817 W. Center St., a business he owns with his father. After developing a following, they connected with Amaranth Bakery owner Dave Boucher and rented kitchen space inside the bakery where they began making juices for delivery all around the city.

A ribbon-cutting ceremony will be held at The Juice Kitchen’s location at 1617 W. North Ave. at 10 a.m. on Oct. 30th. After that, the tentative hours for the business will be from 7 a.m. to 3 p.m. You can follow the business’s Facebook page for updates.

The Silver City neighborhood is becoming a hot new area for restaurants, particularly Thai places. The third such restaurant, Bamboo, opened last week at 3427 W. National Ave. As the neighborhood promotional group, Silver City District reports, Laos native and longtime Milwaukee resident Santana Tenhover, is the head chef and owner, along with her husband Andy Tenhover, and they serve “authentic, made-from-scratch Laotian/Thai dishes for every eater, including carnivores, vegans, vegetarians, and those who eat gluten free or low sodium.” That should cover every eater.

It’s the first restaurant for Tenhover, who said she has worked in restaurants for 11 years, doing everything from washing dishes to managing, the Journal Sentinel reported.

This November, Iron Grate BBQ Co., specializing in outdoor wood-smoked meats, will open along with Hawthorne Coffee Roasters’ new café in the same building at 4177 S. Howell Ave., according to the Journal Sentinel.

Owner Aaron Patin, the executive sous chef at Ardent, will be introducing the “Milwaukee rib”: a three-inch-thick cut of pork rib with the belly meat attached. The dish was inspired by Patin’s six-month travels in Asia in 2010. “The Milwaukee rib is the bread and butter” of the new restaurant, Patin told the Journal Sentinel. “It’s what I want to be known for.”

In addition to the Milwaukee rib, the restaurant will also serve beef brisket, pulled pork, smoked hot links and side dishes such as baked beans. All  dishes will incorporate at least one smoked ingredient, such as smoked tomato for mac and cheese. The smoking will be done in Patin’s two homemade smokers, affectionately named Edna and Roxanne. There will be only one sauce, which Patin described as “tomato-based, with salty acidic and spicy notes.”

The West Allis-based Hawthorne Coffee Roasters originally sold its coffee to restaurants and customers through online storefronts and farmers markets. But due to popular demand, Hawthorne decided to set up a shop and café.

Both Hawthorne Coffee Roasters and Iron Grate BBQ Co. will be moving into the building on Nov. 2nd. The two businesses will both occupy the 50-seat space through a point-of-sale system, with Iron Grate BBQ Co. serving lunch and dinner, from 11 a.m. Friday to Sunday (and eventually Wednesday to Sunday), and the café serving in the morning, from 6 a.m. to noon Tuesday to Sunday. “It’ll be an interesting experiment,” Hawthorne Coffee Roasters owner Steve Hawthorne told the newspaper.

You can keep up to date with Iron Grate BBQ Co. through Twitter.

The Milwaukee Art Museum will soon have a brand new form of art on display. Jason Gorman, most famous for his work with Potawatomi Hotel & Casino’s Dream Dance Steak and the Iron Horse Hotel, will be the new executive chef at the museum and its Calatrava Cafe, as reported by OnMilwaukee.

Gorman left Milwaukee in 2012 to become the executive chef at the Art Institute of Chicago with Tony Mantuano. In 2014, he returned to Kenosha to take over as head chef for Mangia Wine Bar. The former executive chef of the museum, Micah Kaufmann, left Milwaukee to form an eco-resort and pop-up project at the Red Hill Nature Resort in India.