I moved from Cambridge to Milwaukee in 1973 to become a member of UW-Milwaukee’s philosophy department, and was soon joined by enough other transplanted Easterners that we found it necessary to form a department pizza committee charged with finding a satisfactory yeast crust, hand-thrown New York style pizza, as opposed to the thin, yeastless cracker-crust pizza so beloved by Milwaukeeans. I wasn’t as dogmatic as some of the other members, as I’ve never met a pizza I didn’t like (though I certainly like some better than others), but much as I cherish the venerable traditions behind places like Zaffiro’s and Pizza Man, I have to say that those local concoctions, with their crusts the consistency of brittle cardboard, do try the soul.

I’ve heard that this style of pizza is also popular in St. Louis, but it was introduced to Milwaukee by a couple named Joe and Agatha Todaro towards the end of WWII at the Caradaro Club, their restaurant in the Third Ward. They’re commemorated by a brass plaque on a building on Catalano Square near the restaurant’s original site, and while I’d usually be the first to applaud memorials to indigenous culinary heroes, I confess that every time I look at that plaque the thought crosses my mind that Catalano Square would have made a perfect place for a public hanging.  As for the philosophy department’s pizza committee, it disbanded in failure sometime in the 1980s.

Things have improved much since then, and it is now possible to get perfectly fine local pizzas that need no apologies—at Transfer, for instance (also available at Glorioso’s and the late, lamented Via on Downer) and Classic Slice. But now Carini’s La Conca d’Oro (3468 N. Oakland Ave.) has taken Milwaukee pizza to, as they say, a whole new level with the introduction of genuine Neapolitan pizzas. The craze for Neapolitan pizza swept through New York a few years ago and is still going strong (though stalwarts like John’s continue to thrive), but it requires the right sort of oven, ingredients and technique. Peter Carini and his son Gregg imported a huge wood-burning Acunto oven from Naples that cooks the individual-sized pies, made with a special flour, at over 900 degrees in about 90 seconds, and serves them in authentic uncut fashion (though they’ll cut them if you want).

The result is a crust that’s incredibly light, moist and flavorful, covered with a variety of different toppings with and without tomato sauce.  You might start with the basic margherita ($12) made with tomato sauce, fresh mozzarella and basil, and on your next visit (sure to be soon afterwards) try the tomato-less Carini special ($16), whose toppings include fresh mozzarella, prosciutto and arugula. Perhaps the heartiest pizzas are the Diavola ($15), with tomato sauce, sausage, soppressata, chilies and fresh mozzarella, and the Quartto Gusti ($16) with ham, artichokes, mozzarella, tomato sauce and chilies, but you can’t go wrong with a simple pepperoni pizza, the Dominico ($12.50). The rest of Carini’s menu consists of satisfying, old school Italian and Sicilian dishes, including excellent spiedini, and whatever you order you can start with ethereal, tempura-like fried zucchini ($10) or a small Caesar salad with anchovies and a piquant dressing (not listed on the menu).

It used to be that you had to drive to Sheboygan to get real Neapolitan pizza at Il Ritrovo (an offshoot of Stefano’s), but now it’s available right in your own backyard, at Carini’s as well as a few other places around town (including a corporate restaurant, Blaze, in Bayshore Shopping Center, which I haven’t tried).  And the word is out: I often enjoy a quiet Sunday dinner at La Conca d’Oro, but on my last visit the place was packed, pizza was the order of the day and everyone looked happy. Now if only the pizza committee were still around. 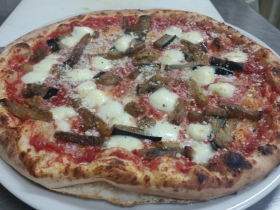 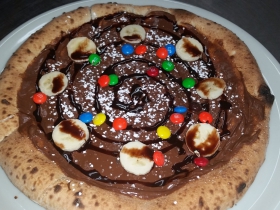