Only one day to go at the Milwaukee Film Festival, but the films will live on much longer. While it will be tough to catch showings of more than a few select films at the festival at this point, many of the films will soon be appearing on Netflix or even at local theaters. And many are worth seeing.

The 26 films I’ve seen offer a wide range of subjects and styles. Without further ado, here are my rankings, from best to worst:

One thought on “Milwaukee Film Festival: 26 Films From Best to Worst” 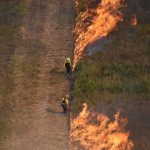