My Office, the Bar That Never Changes

The long-running, no-frills bar and restaurant has an owner with a Disney-esque philosophy. 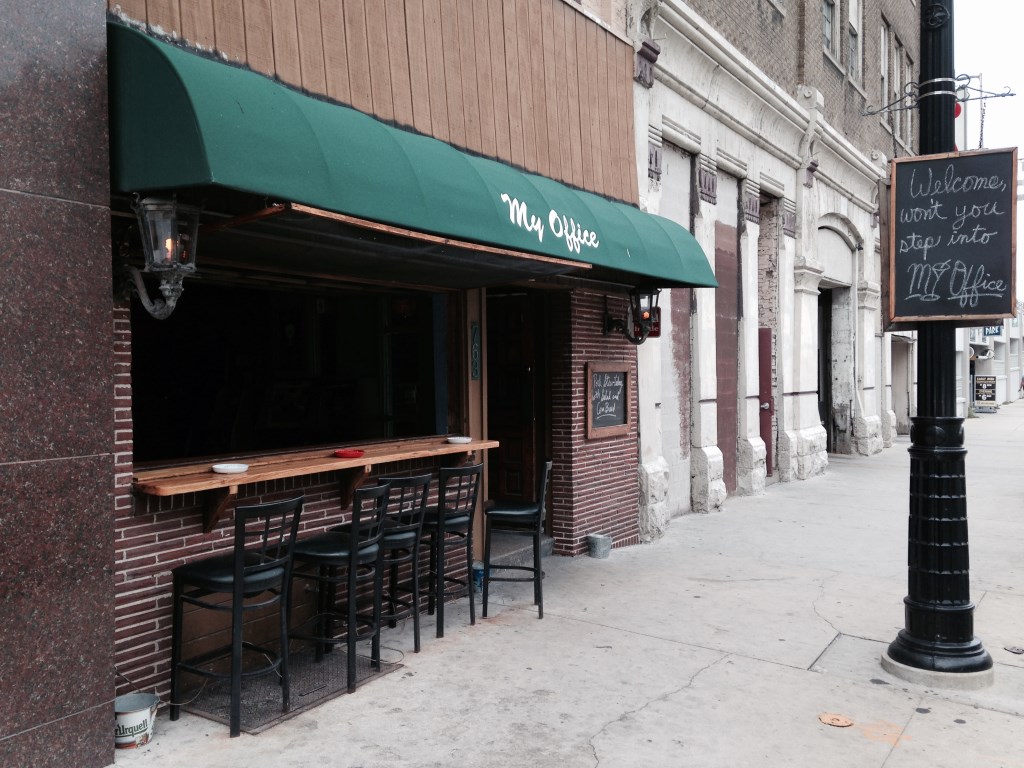 My Office. Photo by Dave Reid.

One one corner of the bar is a 3D poster of Spider-Man. In the other, a Dracula dummy. The wall is lined with a modest selection of whiskey, vodka, and beer on tap, the highlight being the line of Smirnoff drinks in every flavor you can imagine. Video poker machines litter the space. As I glanced at the ’80s and ’90s music videos on the TV, listened to the bartender tell his stories, and chowed down on my homemade meatloaf sandwich and pasta salad for $5, I thought to myself, “Wow, this is one office I wouldn’t mind working overtime in.”

My Office is a dive bar and restaurant located at 763 N. Milwaukee St. in downtown Milwaukee (right next to Urban Milwaukee: The Store and Rock Paper Scissors Gift Shop). Featuring a friendly crowd, a wide variety of drinks, and fantastic food deals for breakfast and lunch, My Office has become a staple restaurant for many of the workers around the area, including myself and my fellow interns.

Urban Milwaukee has covered My Office before as part of our Weekly Happy Hour series, but for this article I’m focusing on the business itself. I chatted with Brian J. Peterson, its owner, to shed some light on the matter.

Beginning of the Business

My Office has been a very popular bar for many decades. For many years, it was known as Ticker Tape. Eventually, as the business changed hands, at one point it became known as My Office. Now if someone called you — say your spouse — while you were at the bar, you could truthfully say “I’m at My Office.”

Peterson’s stepmother, June, bought the business in 1979 and, along with his sister, Sandy, handled all of its operations. Peterson came to know the restaurant when his father was doing remodeling for the building and eventually hit it off with June.

After graduating from high school in 1979, Peterson continued to work for My Office under his stepmother’s ownership. He left the business around 1985 or ’86 and worked at a variety of other places, including working for the parking garage next door to My Office (which his stepmother also owned), and working for a Chevrolet service department as a service advisor. Somewhere around 1996 or ’97, he came back to My Office and became the owner.

One might think moving from the automobile industry to the food and bar industry would be a rocky transition, but Peterson says it wasn’t. He was a service advisor for a good chunk of time, and his duties included handling communications with the clients before and after cars were fixed. Many of the skills he learned from that job translated well into owning a bar. “[You] still have to be able to talk to people [and] take everything with a grain of salt,” Peterson says.

Peterson has several bartenders. During lunch, you’ll most likely see Robert Beerman and Debbie Beerman, a lovely married couple who bartend and cook the food respectively. Debbie was hired by Peterson’s stepmother and sister while they still owned the restaurant and Robert came in when he needed a day job. Peterson was bartending for a while, so he offered the position to Robert so that he can “take the [cigarette] smoke” instead of Peterson, as the owner puts it.

The Future of the Business

Peterson says he’s not planning to change much. Customers, he says, have begged him not to change a thing. He promises six things he’ll try to keep the same: atmosphere, cost, personnel, hours, availability, and location.

The last thing he wants is for My Office to turn into a snootier place that serves $15 martinis. He’s walked into places before where people turn around and glance at you and the bartender spouts off some rude comment for whatever reason. “It makes you wanna turn around and walk out of the door again,” Peterson said, “That’s not something I’m looking for here.”

It’s the down-to-earth nature of his establishment that’s been the key to its success, Peterson believes. Since Milwaukee is more of a blue-collar town, and since most of the bar’s customers are food industry workers that survive off tips, he wants to keep things accessible and affordable. He wants to keep the bar a place where you don’t have to feel like you’re on display; you can just come in, have a beer, take it easy, and share a story or two with some friendly faces. “We want to keep our friends coming in here.”

He wants it to be like Cheers, where you walk in “and everybody says hi to you and you come in and you can breathe that sigh of relief. ‘Thank God that I got out of work, I didn’t have to go home yet, I’m at My Office, at a place where I feel comfortable and secure.'”

That’s resulted in a success for the business, though “things get tight from time to time,” Peterson says. “There are times when it’s a struggle, and we do the best we can to try and maintain. It’s not always easy.”

When asked what advice he would give to people looking to open up their own bar, Peterson says, “Don’t drink.” Despite being the owner of the bar, and a bartender from time to time, Peterson just doesn’t like the taste of alcohol. “I’m a very, very rare breed, especially here in Milwaukee, and that’s a very good thing. Being able to drink with your clientele is maybe important, but if you’re always drunk, you’re not gonna be able to maintain a business, because you’re not gonna have a clear view of what’s going on.”

Peterson also advises that you need to have a finger in everything that happens in the business. He lives right above the bar, which means he’s always hearing what’s going on downstairs and always tuned into the goings-on. He may have the opportunity to take a nap from time to time, but for the most part he’s always doing something for the bar: shopping, updating, repairing, and dealing with what he calls the “political pitfalls” of the employees and the customers. “It’s almost like raising another family,” he says.

As far as a work philosophy goes, he doesn’t have one of his own. But he is inspired by the philosophy of Walt Disney.

“Make the place as nice as you can make it and make it a fun place to go and treat your employees the way you want your customers to be treated. If you take care of your employees then they’ll take care of your customers.  Keep everybody smiling as much as possible. Make them wanna have a reason to want to be there,” Peterson concludes. So maybe he has a philosophy after all. 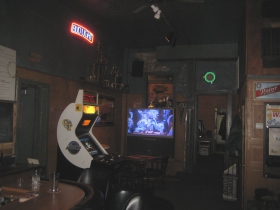 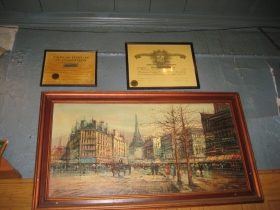 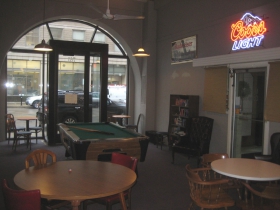 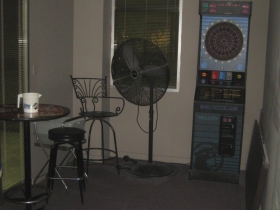 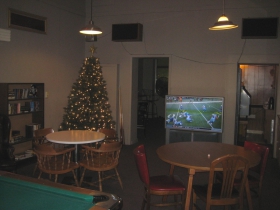 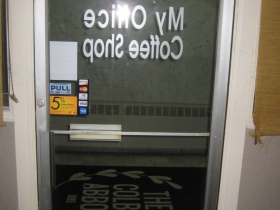 One thought on “City Business: My Office, the Bar That Never Changes”