The Fall of Scott Walker

Did the Club for Growth contribute to the rise of Donald Trump and the fall of Scott Walker?

What is behind the quick rise and fall of Scott Walker? I would suggest that he was a victim of the growing gap between the voters Republicans increasingly depend upon and the agenda of funders of Republican candidates. Nowhere is this gap more pronounced than when it comes to campaign finance.

When he is not attacking immigrants, the Iran agreement, women for their looks, or supposed enemies of Christianity, Donald Trump criticizes his rivals for their dependence on Super PACs and wealthy donors. He also calls for higher taxes on hedge fund managers and other wealthy individuals. Attempting to turn his wealth from a liability to an asset he claims he is the only candidate that won’t be dependent on the wealthy individuals and interest groups. Trump distantly echoes Herb Kohl, whose self-funding allowed him to be “nobody’s senator but yours.”

The message of these tweets is that Trump, with a self-financed campaign, is the only candidate not beholden to other rich people. The sight of Scott Walker auditioning for the support of Koch-supported groups played into Trump’s story line.

Walker tried to portray Trump’s attacks as a sign that he is a secret liberal. But the evidence indicates that his views on campaign spending may be closer to those of the average Republican primary voter than are those of his critics.

Numerous polls have shown that voters are unhappy with the role of money in politics. Particular ire has been focused on the Citizens United decision because it opened the door to corporate donations.

In early June of this year a New York Times/CBS News poll surveyed public views towards campaign financing. The Times headline summarized the finding: Poll Shows Americans Favor an Overhaul of Campaign Financing. Those unhappy with the present system included a majority of self-identified Republicans.

The next series of graphs summarizes the answers from all respondents (shown in green) and those identifying as Republicans (shown in red). Overall it is clear that when it comes to campaign finance Republicans are much closer to Democrats and independents than they are to Republican leaders, such as Sen. Mitch McConnell, or the funders of Republican candidates, such as the Club for Growth. 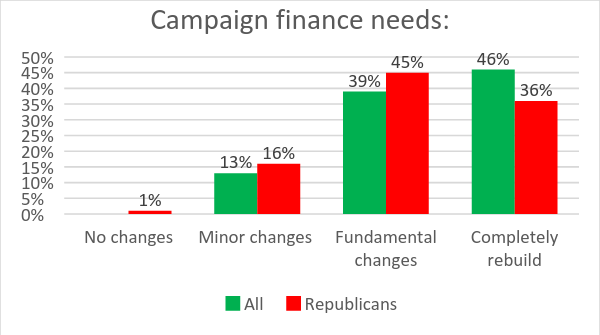 The next graph shows responses to the question, “do you think money has too much influence, too little influence or is it about right?” An overwhelming majority of Republicans agree with other Americans that money’s influence was too much. 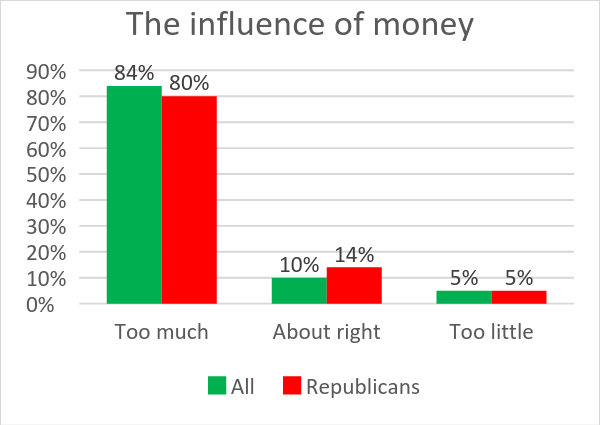 The influence of money

In their view, donations bought influence over legislation. The next chart shows the responses to the question, “How often do you think candidates who win public office promote policies that directly help the people and groups who donated money to their campaigns — most of the time, sometimes, rarely or never?” 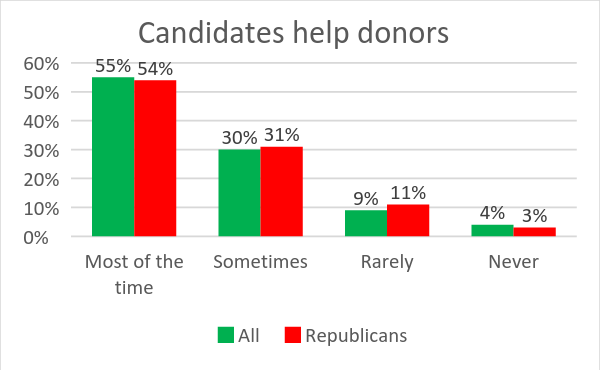 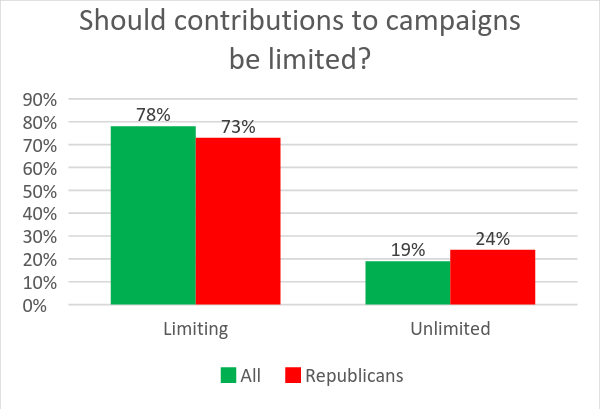 Should contributions to campaigns be limited?

It should be noted that present law does limit the size of contributions. However, the recent Wisconsin Supreme Court decision shutting down the John Doe investigation seems to open a very wide loop hole in this limitation, by allowing coordination between candidates and outside groups able to accept unlimited contributions.

Even without coordination Republicans join their fellow citizens in not liking unlimited spending by outside groups. Here is how they responded to the question, “Currently, groups not affiliated with a candidate are able to spend unlimited amounts on advertisements during a political campaign. Do you think this kind of spending should be limited by law, or should it remain unlimited?” 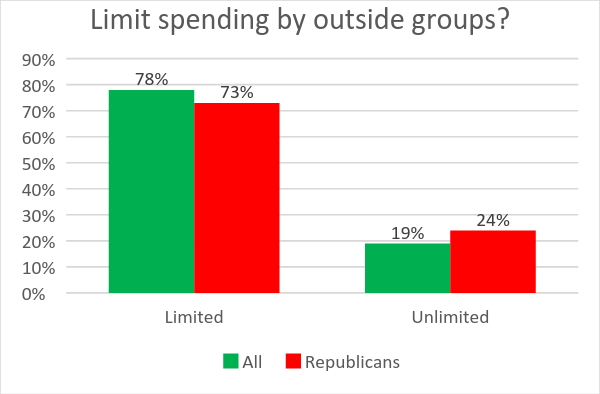 Limit spending by outside groups?

In the Citizens United case, even as the US Supreme Court struck down limits on political contributions from companies, eight of the nine justices made it clear they would accept a requirement that the outside groups disclose their contributors. Proposals to do these have failed because of the Republican leadership in Congress.

This is another case where the funders Walker needed to fund his campaign were out of sync with the Republican rank and file. Here is how people responded to the question: “Do you think groups not affiliated with a candidate that spend money during political campaigns should be required to publicly disclose their contributors, or do you think it’s O.K. for that information to remain private?” 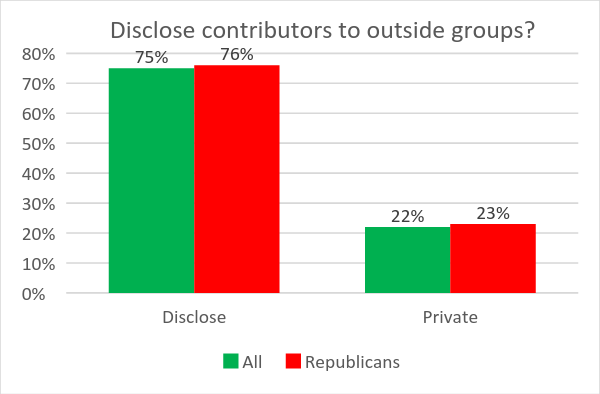 Disclose contributors to outside groups?

Certainly much of Trump’s success in the opinion polls is due to his willingness to pander to the worst instincts of a segment of the Republican base. However, his attacks on the high-spending individuals and groups shrewdly exploit a huge gap between Republican funders and many Republican voters. Rather than committing political heresy, he taps into a concern that resonates with voters who identify as Republicans.

In its series of election finance decisions, starting with Buckley v Valeo in 1976, running through Citizens United in 2010, to McCutcheon last year, the US Supreme Court has severely curtailed restrictions on money in elections. In doing so, the justices played down the amount of damage they were doing to the electoral process.

The court was encouraged in this path by the Republican establishment and many organizations on the right. Following the McCutcheon decision, which removed the aggregate limit on how much a donor could give to all candidates, Republican National Committee Chairman Reince Priebus said in a statement, “I am proud that the RNC led the way in bringing this case and pleased that the Court agreed that limits on how many candidates or committees a person may support unconstitutionally burden core First Amendment political activities.” Newsweek reported that the RNC hoped the decision would have an immediate effect on the number of donors to campaigns, parties and political action committees in that year’s midterm elections.

The Club for Growth, also celebrated. “This is a great day for the first amendment, and a great day for political speech,” said Club for Growth President Chris Chocola. “With Citizens United and now McCutcheon, the Supreme Court has continued to restrict the role of the federal government in limiting and regulating speech. We hope further efforts to increase the ability of citizens to participate in our democracy are also successful.”

The club’s next target would be Wisconsin’s restrictions on the ability of candidates to coordinate with outside groups. Ironically, the court pointed to these very restrictions as one reason that independent advocacy has “substantially diminished potential for abuse” (Buckley). In the McCutcheon decision, Chief Justice John Roberts wrote:

We have said in the context of independent expenditures that “ ‘[t]he absence of prearrangement and coordination of an expenditure with the candidate or his agent . . . undermines the value of the expenditure to the candidate.’ ” Citizens United, … (quoting Buckley …)

Critics of the US Supreme Court decisions have considered naïve the justices’ belief that lack of coordination makes the independent expenditures less effective. Typically candidates set up a super PAC, staffed with loyal operatives. For example, Unintimidated PAC, Scott Walker’s super PAC, is run by Keith Gilkes and Stephan Thompson. Gilkes ran Walker’s 2010 campaign and 2012 recall effort. Thompson managed his 2014 reelection bid. The federal rules against coordinating didn’t kick in until the candidate is official. Walker announced his candidacy late, on July 13. Up until that time he was free to discuss strategy with Gilkes and Thompson, visit primary states, and help Unintimidated raise $20 million (according to the New York Times). It seems far-fetched that Walker would not have settled on a joint strategy and division of labor with Gilkes and Thompson—as with the other candidates and their super PACs.

Since July, however, Walker could not legally talk to Gilkes and Thompson. The Atlantic’s Molly Ball suggested that part of Walker’s problem was “that two of his most trusted advisers can no longer talk to him.” The rise of Donald Trump would throw into doubt whatever strategy Walker and Unintimidated developed. Should they respond and, if so, how?

Ball went on to point out that other candidates seemed to suffer the same problem. Jeb Bush and his super PAC, Right to Rise, often seemed to work at cross purposes, particularly in responding to Trump. Rick Perry‘s campaign was “suspended” because it ran out of money to pay staffers, even though his super PAC raised $17 million. Of course if the campaigns were working under Wisconsin rules, they could coordinate to their hearts’ delight, until the time came to explicitly tell people how to vote.

The Club for Growth has emerged as the most bitter Trump critic. It would be ironic if, in working to dismantle restrictions on financing, it helped create the very conditions that allowed the Trump candidacy to prosper and the Walker candidacy to collapse.

10 thoughts on “Data Wonk: The Fall of Scott Walker”