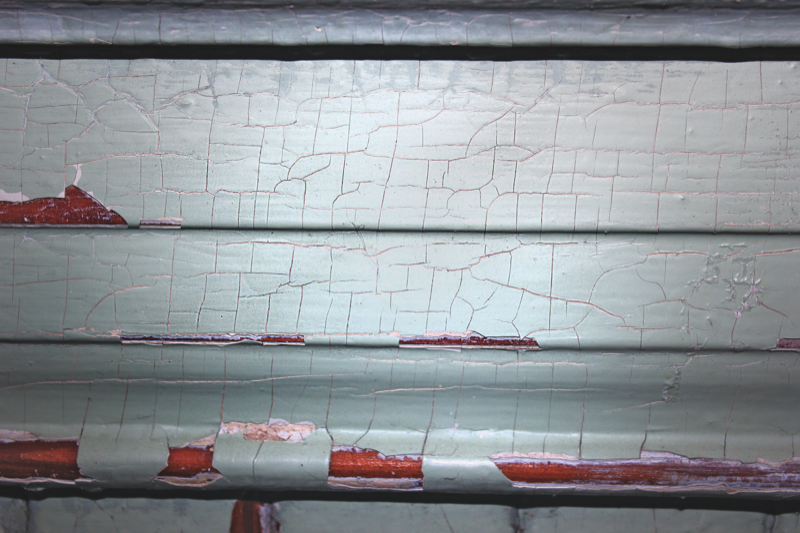 The pattern of cracks visible in this image is typical of older lead-based paint. But the lack of the crack pattern doesn’t imply the surface is lead-free, because it could be painted over. Photo from the National Institute of Environmental Health Sciences.

In September 2013, an extraordinary study of Milwaukee Public School students was released by Michael Amato, of the UW-Madison Department of Psychology, documenting the impact of lead poisoning. The study found that nearly one in three MPS students exposed to lead had been suspended, compared with just over one in 10 of those not exposed.

Lead exposure, the researchers calculated, explained 23 percent of the gap in suspension rates between African-American and white Milwaukee students.

Lead poisoning, mostly caused by lead paint in older homes, is still having a huge impact in this city, as writer Matt Hrodey recently reported in Milwaukee Magazine.  The feature story noted that one in ten Milwaukee children below the age of 6 have some form of lead poisoning, which “can inflict withering neurological damage” and “can slow their mental development, lower their IQ” and cause “impulsive and disruptive behavior.”

Lead paint found in older homes has affected children in older suburbs like Cudahy, Shorewood and West Allis, “and in today’s Wisconsin, about a quarter of poisonings occur in cities with less than 50,000 people,” Hrodey reports.

But the problem is most prevalent in urban centers. According to the Centers for Disease Control and Prevention or CDC, African-American children are more than twice as likely as whites to have elevated lead levels, because black children are more likely to live in lower-income neighborhoods where lead remains in the buildings and soil.

Nearly 25 years ago, back in January 1991, I edited a Milwaukee Magazine feature on lead poisoning (by free lance writer Terry Falk, who later went on to become a Milwaukee School Board member). I was curious to see how much the situation had changed since then.

In some ways things have gotten better. Back in 1991, the city was still in the early stages of combatting the problem and a city health official estimated that its screening efforts were missing two-thirds of the lead-poisoning cases in the city.

Since then the city has made great strides in screening children and remediating homes with a lead paint problem. The city has remediated 16,000 homes, making them safe from lead, Hrodey reports, but that still leaves 130,000 homes to go.The city has been using federal money for its innovative program that focuses on replacing windows (the major cause of lead poisoning), but its federal grant for this program is winding down with no prospect, at this point, for new money.

Falk reported the story of an MPS chemistry teacher who conducted a classroom test to check for lead paint in his students’ homes. Some 260 students brought in paint chip samples from their home and one third of them tested positive for lead. Nationally, lead remains in 30 million homes.

And the level at which children can be poisoned has been lowered over time. Back in 1991 the safety level for lead in a child was considered 25 micrograms per deciliter of blood by the CDC, but that was soon lowered to 10 micrograms, and more recently (in 2012) set at five micrograms. Even at the level of two micrograms, this small amount of lead has been found to inhibit the “synaptic pruning” that “the brain must carry out as it matures into adulthood, Hrodey writes.

CDC data shows that northern states have the highest rates of lead poisoning, because of old housing stock and tough winters that lead to blistering and peeling paint. The story ranks Wisconsin ninth in the data in sheer numbers, but most of the states (New York, Ohio, Pennsylvania) have considerably more population, suggesting Wisconsin may well rank near the top. Testing by the Wisconsin Department of Health Services in 2014 alone found 4,000 kids tested positive for lead poisoning.

The federal government banned the use of lead paint in 1978, but evidence that lead paint was harmful had been mounting since at least the 1950s. Lead Wars, a book published in 2013 by Gerald Markowitz and David Rosner, presents considerable evidence that paint manufacturers continued to sell lead paint long after their products were identified as health hazards.

Paint manufacturers point the finger at landlords, blaming them for negligent upkeep of homes. And landlords in Milwaukee, local officials have found, are typically unwilling to work with a city program that provides 80 percent of the funding to remediate lead paint if the owners pay 20 percent of the costs. Given the opposition of many in Congress to federal funding for programs like this, that leaves no way to solve the problem, which will continue to plague children and significantly retard their academic achievement and career prospects.

Wisconsin has become something of a leader in suing the paint manufacturers because of the work of Milwaukee attorney Peter Earle. Earle was part of a group of lawyers that successfully sued manufacturers in California that won a $1.15 million jury award requiring the manufacturers to remove all lead paint from homes. The case is now on appeal.

Earle has also filed at least eight different cases representing 73 different plaintiffs in Wisconsin. He was the attorney who succeeded in getting the Wisconsin Supreme Court in its 2005 decision, Thomas V. Mallet, to accept the “risk contribution theory” whereby a plaintiff could sue all the paint manufacturers without proving which one had sold the paint for the home in question.

The theory, says Earle, is that “when the evidence shows all the manufacturers were negligent” and the product is essentially generic “and indistinguishable” so that the plaintiff can’t prove which manufacturer painted the particular home in question, then all are liable since there is otherwise no way to hold any accountable.

This decision, written by former Justice Louis Butler, was much criticized by Wisconsin Manufacturers and Commerce, which spent $1.2 million in its successful effort to defeat Butler, who lost to challenger Michael Gableman. But the state high court has never overturned Thomas v. Mallet, and an appeal to the 7th Circuit Court of Appeals upheld the theory, allowing Earle’s suits to go forward.

In response, the lawyers for the paint manufacturers requested that all 11 judges on the court of appeals, and not one (which includes numerous Republican appointees) signaled a willingness to overrule Thomas v. Mallet. The manufacturers’ lawyers then asked the U.S. Supreme Court to consider it (through a writ of certiorari) and once again, not one justice showed a willingness to rule in the companies favor.

There are five paint manufacturers being sued, each of whom has a team of lawyers, so this veritable army of attorneys has successfully delayed the case for about a decade. But it will now go to trial before federal judge Lynn Adelman and Earle hopes that will commence in 2016.

The manufacturer of Dutch Boy paint, which once advertised itself as 88 percent lead, was a company with the fateful name of National Lead. Now called NL, it has settled out of court with most of Earle’s plaintiffs, agreeing to pay a “special needs trust” proportionate to each child’s level of exposure, as Hrody reports. That leaves four companies to go, and Earle intends to plug away until all accept responsibility for the problem.

4 thoughts on “Murphy’s Law: The Plague of Lead Paint Poisoning”