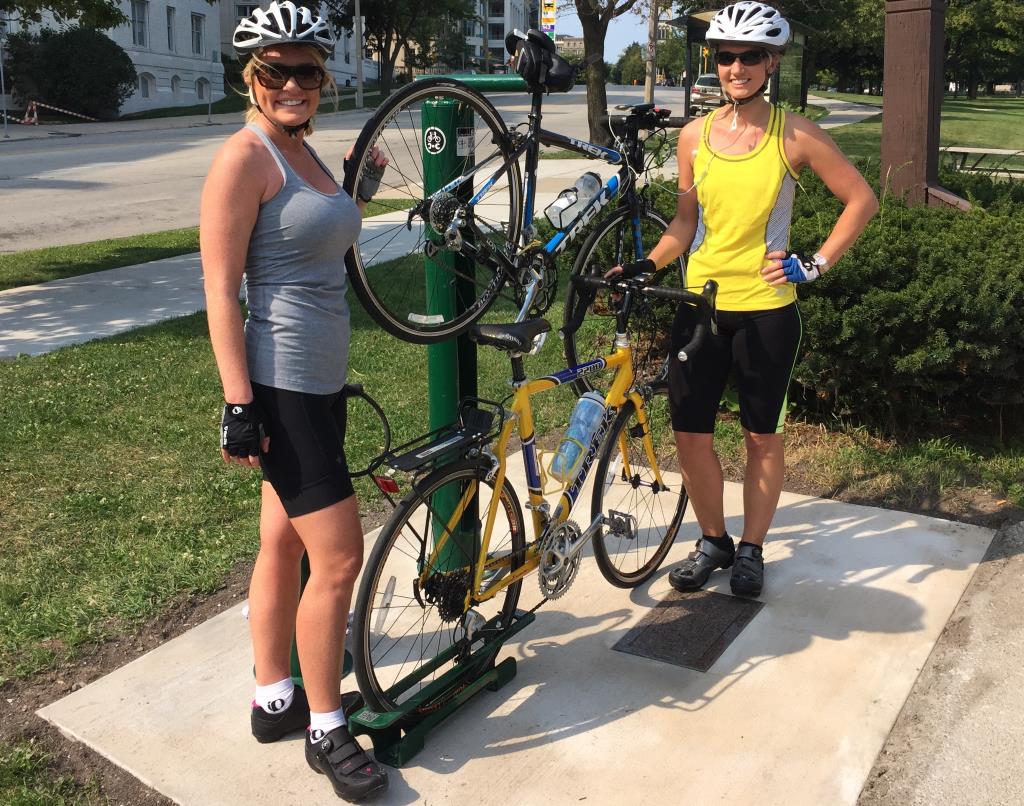 Trying out the Fixit station.

Bicyclists who once found themselves “flat” out of luck downtown now have a 24-hour do–it-yourself repair option.

A Dero Fixit Public Bike Service Station is now at the ready at the south end of Juneau Park. It was installed Thursday, August 27th, according to Lisa Hatch of the Juneau Park Friends.

The station includes eight common bicycle tools cleverly mounted on a repair stand. When not in use, the tools swing on their wire ropes into the shelter of a hollowed-out steel column that also serves as a bicycle rack. The station includes a hand pump with a pressure gauge and a universal fitting suitable for both Schrader valves (the kind on automobile tires) and Presta valves (the kind on cool kids’ bicycles).

The service is located at an entry/exit to the Oak Leaf Trail, well situated just south of the park’s sign at the intersection of E. Mason St. and N. Prospect Ave. Lake Michigan beckons just below.

The stand was to have been installed weeks ago, Hatch said, but there were delays in getting the product shipped.

But it only took moments after the installation for the stand to be pressed into service — both for its utilitarian purposes and as yet another place for like-minded bipedalists to congregate downtown.

It was a kick to stop the first 2 bikers going by and ask them to test the Fixit.  It was great fun when other bikers starting stopping & chatting – two commuters discovered that they ride the same route almost daily between the UWM neighborhood and their downtown jobs; a retired railroad man reminisced about old rails tuned into trails, and all of us were delighted with the discovery of the magnetic pump nozzle.

The $1,500 station, as well as the cost of installation, was donated by Barbara Stein, a resident of the Cudahy Condominiums, whose unit overlooks the installation. It rests on a concrete slab with an embedded engraved granite marker that reads: 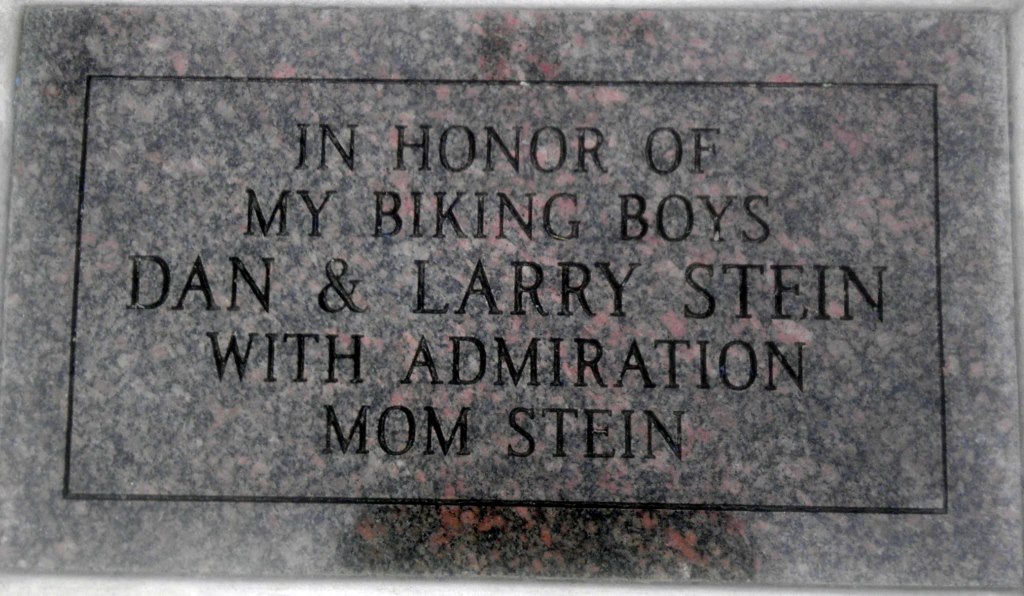 In an interview, Stein explained why she donated a bike repair station to the community, and dedicated it to her sons. She said that she remembered “teaching them how to balance on their bikes” when the boys, now in their mid-fifties, were growing up on the North Shore in a home with a long driveway. “Then I got them to ride on Lake Drive in Fox Point,” where the family lived. Next stop — Baskin Robbins in Bayside!

Stein said she often looks out her window today and sees the many bicyclists in the park, and reminisces when she sees young parents teaching their children how to operate their machines. It brings back memories of when her sons, who now live on the west coast, were first learning to ride. “They have not lived in Milwaukee for twenty years,” she said. Dan lives in Oregon, and Larry lives in California.

“My sons still ride their bicycles,” she said. “One more than the other,” she added diplomatically, not naming names.

Stein said she was approached by Lisa Hatch one day about the friends group’s plan to improve Juneau Park, which is fronted by some of Milwaukee’s most prominent addresses, theirs included. [Hatch and her attorney husband Mike Hatch live in the University Club Tower across E. Wells St. from the Cudahy.]

“I thought it was a marvelous opportunity to spruce up an area on the Gold Coast. I live so close to the park, I was happy to help,” she said.

“Lisa mentioned the idea of a Fixit machine and said ‘wouldn’t it be wonderful for our park?’ and I agreed to do it.”

Later Stein learned that her donation would come with a naming opportunity, “and I thought I could dedicate it from a mom to her boys.”

Likewise, a granite marker with their names on it in a public park makes for a great guilt trip from a mom to get her out-of-town sons to come and visit.

The father of Dan and Larry Stein was philanthropist Marty Stein, who died in 2006 at age 68 of cancer. Stein’s legacy includes the Stein Scholars College Access & Support Program of the Boys and Girls Clubs of Greater Milwaukee. Dan and Larry return to Milwaukee each June for the program’s graduation ceremony, their mother said.

Even if it ain’t broke, you can fix it here.

The granite marker is likely to remain long after the repair station has rusted away, leading residents of a future generation to wonder why Mom Stein dedicated a concrete slab to her kids.

But it appears the bike stand, with its tamper-resistant, simple construction and green powder-coated surface might be able to make it through a number of winters, especially because it is somewhat removed from the heavily salted areas of pavement.

The tools should allow a bicyclist to maintain most bicycle components. Riders should be able to adjust their brakes and seats, for example, as well as remove their wheels, in the event of a dreaded flat. The stand has two tire tools attached to expedite that process. You won’t be able to true your wheels, rebuild your bottom bracket or replace your spokes here, but you should have tended to that before you got on the bike. Safety first!

But even if it ain’t broke — if a tire’s merely low on pressure, for example — the stand should prove to be a relief for bicyclists. The pump, which is separate from the stand, is located next to a simple rack that secures a bicycle’s tire. The universal air fitting, with its magnetic properties, as noted, is a great innovation. The pump has a gauge, which appears to be filled with an oil to prevent fogging; it is quite readable.

The station may prove a boon for riders who are in the area regularly, like those UWM-area commuters, and who wish to keep their tires safely inflated conveniently, and for free, at any time, day or night. 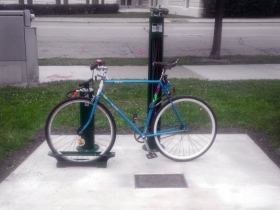 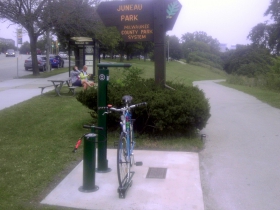 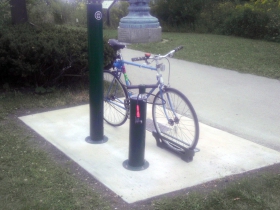 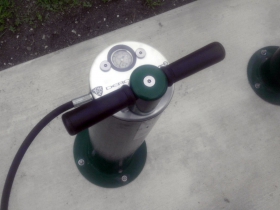 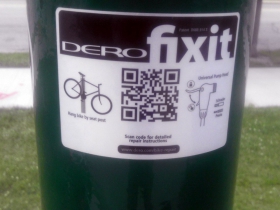 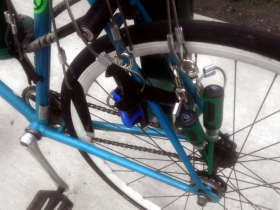 Juneau Park Friends was established in 2009 “as a non-profit with a mission to promote the preservation and renewal of Juneau Park.” It was granted tax-exempt status by the IRS in August, 2012.

The group has an ambitious agenda to improve the park with:

Even if you didn’t need to service your bicycle this weekend, it was still a great time to check out Juneau Park and to celebrate the 30th anniversary of Sprecher Brewing, “Founded in Milwaukee, 1985,” as its labels say.

Sprecher was founded by sandy-haired Randy Sprecher, a California transplant who had first tasted of good beer in Germany, and longed to replicate it here. From 1985 to 1994, the brewery was located in the P&V Atlas Center, 730 W. Oregon St., where its logo can be seen on a chimney to this day. The brewery is now at 701 W. Glendale Ave., Glendale where its logo can be seen on a grain silo located as close as possible to the freeway for maximum visibility. Sprecher knows the value of free advertising!

The old brewery was a creaky, leaky place, and the area surrounding it showed no sign of one day being an office and residential destination, as it has become, with the Potawatomi Casino, the Harley-Davidson Museum and the Iron Horse Hotel being then mere dreams.

But Sprecher put it on the tourist map, attracting visitors who wanted to see the novelty of an operating small-batch brewery up close. Today the old brewery neighborhood itself is the home to the Great Lakes Distillery, and is still a tourist draw, although the old Sprecher quarters is yet to be rehabilitated. That day will come.

Sprecher Beer and soda is available in 26 states, while an additional 5 states have the soda only. The soda has become the company’s biggest line, but even so it brewed 2,186 barrels of beer in June 2015. Lakefront Brewery, which followed Sprecher in the Milwaukee market in 1988, brewed 4,309 barrels in that month, while New Glarus Brewery brewed 15,711 barrels. This is all a drop in the bucket compared to Miller’s June production of 1,460,139 barrels.