By Sean Kirkby, Wisconsin Center for Investigative Journalism - Aug 30th, 2015 01:40 pm
Get a daily rundown of the top stories on Urban Milwaukee 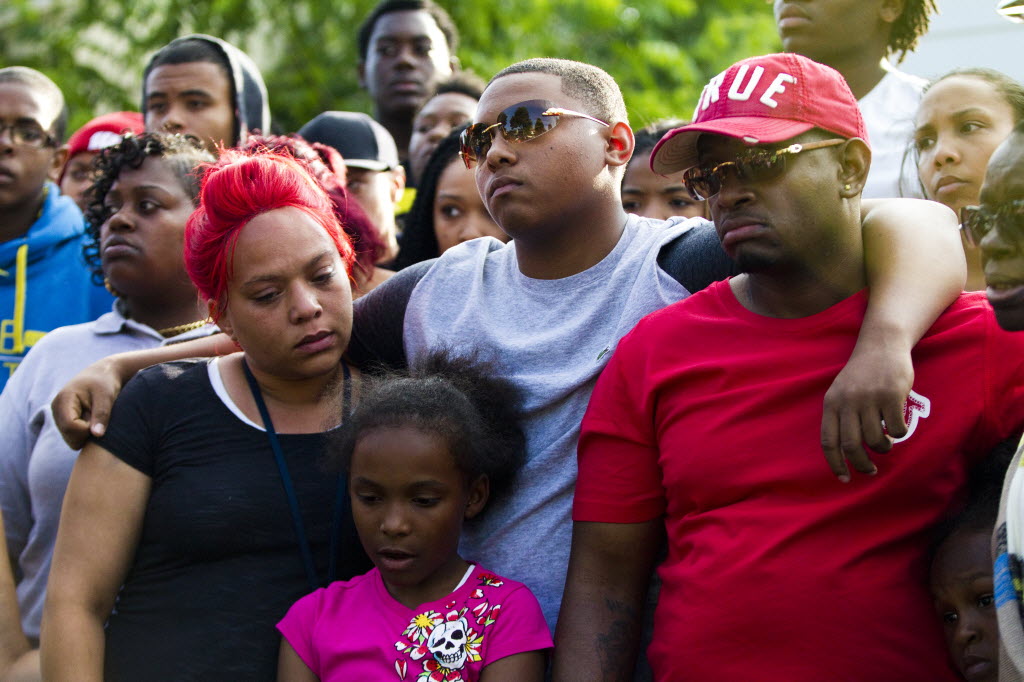 Arifah Akbar, Nazir Akbar and Katraile Scott stand together during a vigil for Tariq Akbar, on July 7. Tariq was shot to death July 3 in Milwaukee, after watching a fireworks display with his friends. Photo by Katie Klann of the Milwaukee Journal Sentinel.

Outside of the Boys and Girls Club of Dane County in Fitchburg, children swing on a playground. Inside the club’s Allied Drive neighborhood location, teenagers dribble basketballs. In the doorway are metal detectors, keeping weapons out of the building. But the danger of firearms still permeates the community.When asked what exposure they had to guns, a group of children talked about their friend, former Boys and Girls Club member Eric Gutierrez, an 11-year-old accidentally shot to death in Walworth County on July 9, 2014, a few months after his family moved there from Madison.“His friends were playing with it,” Keara Jones, 11, recalled during an April interview. “I guess they pulled the trigger and then they shot him. And they left him there.”

Police discovered that Eric and a 14-year-old friend were playing with a handgun in the woods behind the friend’s home in Sharon, a village of 1,600, when Gutierrez was shot in the head. He died the next day.

The gun came from the friend’s father, who kept about 20 firearms in the home. According to police, all of the weapons were accessible, including some stored in an unlocked safe in the teenager’s bedroom. The father was sentenced to a year of probation and has agreed to pay $5,000 in restitution to Eric’s family. The teenager got a year of supervision.

“I feel the justice system has completely failed me and my family,” Rebecca Orick, Gutierrez’s mother, told the Janesville Gazette in April. “I feel like basically that’s saying my son’s life is worth a year.”

It is illegal for anyone younger than 18 in Wisconsin to possess a firearm except for target practice, training or hunting, and then in most cases only under adult supervision. Nevertheless, hundreds or perhaps thousands of teenagers each year illegally carry firearms — for protection or to hurt themselves or others.

Guns and teens can be a lethal mix. Immaturity and impulsiveness, combined with weapons that can kill with the squeeze of a trigger, have caused death and devastating injuries to Wisconsin children and adults. For example, more than 250 children were suspects in nonfatal shootings in Milwaukee alone during the past decade.

Public health and gun experts say teens get their hands on guns from people they know, often friends or family — not primarily by stealing or buying them illegally. They say more needs to be done to keep firearms out of the hands of minors.

In Milwaukee, about 6 percent of public high school students surveyed in 2013 said they had carried a gun in the previous month, with roughly a third of those saying they had carried on four or more days. The survey did not specify where students carried the guns.

That would mean of the approximately 21,000 high-school students enrolled in fall 2012, roughly 1,300 were armed during the previous 30 days. The rate is similar to those in other large cities including Chicago, Houston and Seattle, Milwaukee Public Schools spokesman Tony Tagliavia said.

As of Aug. 24, 41 children under the age of 17 had been wounded and seven killed by gunfire in Milwaukee this year, according to the city’s police department. That includes a 14-year-old boy shot to death during Fourth of July weekend, a few days before a 13-year-old was charged in the shooting death of another boy his same age.

On July 19, a 17-year-old Milwaukee girl was shot to death while standing on her front porch; the shooting was the city’s 86th homicide of the year, tying the total for all of 2014.

Children also were suspects in hundreds of homicides and nonfatal shootings in Milwaukee over the previous decade.

Between 2005 and 2014, 109 children in Milwaukee were suspected of homicide, many involving guns. Minors accounted for roughly 10 percent of all shooting suspects in 2014, according to the Milwaukee Homicide Review Commission.

Statewide, 109 children ages 17 and under were killed by firearms between 2003 and 2012. An additional 15 young people died of accidental shootings in the same decade, according to the Department of Health Services’ injury mortality database.

A 2013 survey of public high school students on risky behaviors found that 14 percent reported carrying a weapon, such as a club, knife or firearm in the previous 30 days. 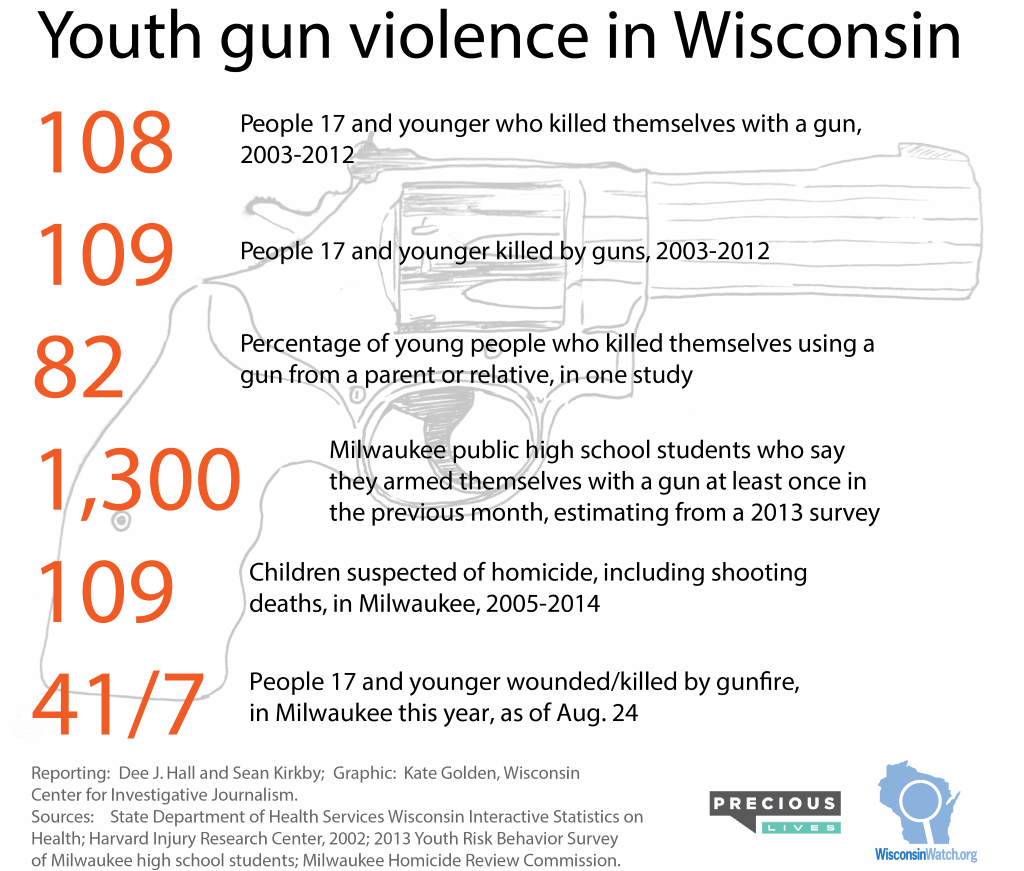 Examples of young people within the past two years using guns to harm others can be found around Wisconsin: 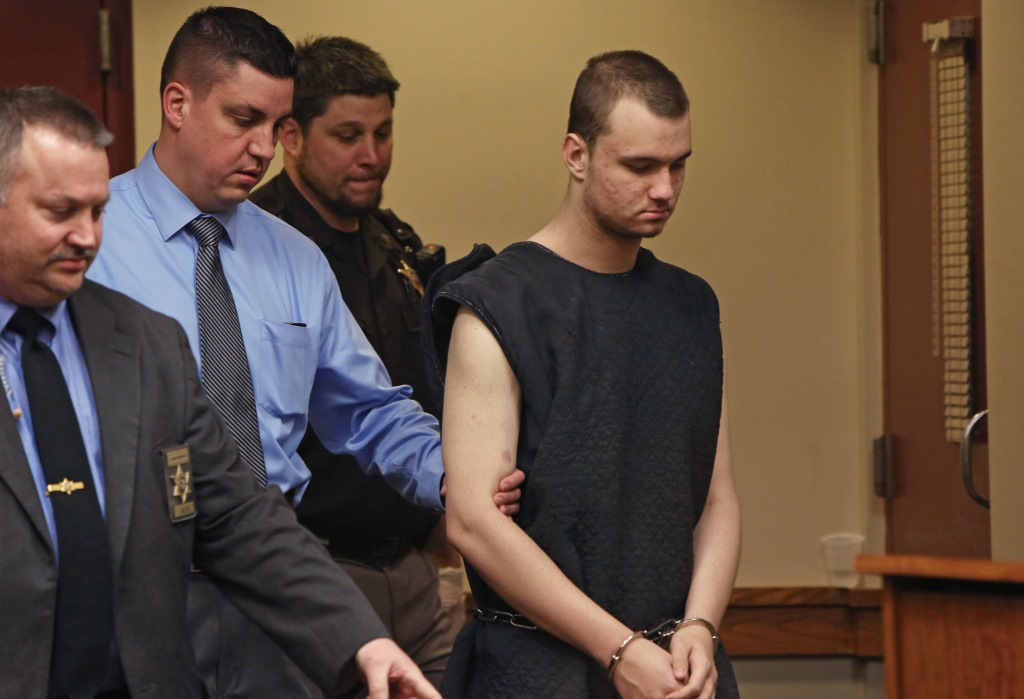 Dean Sutcliffe, 17, of Mazomanie, right, who was charged with the shooting deaths of Ariyl Brady, 16, and Chris Schwichtenberg, 39, is led into his initial appearance at the Dane County Public Safety Building in Madison on Feb. 12. Photo by Amber Arnold of the Wisconsin State Journal.

Many children also have used guns to harm themselves.

Between 2003 and 2012, the most recent years with available data, 108 Wisconsinites ages 17 and younger died from self-inflicted gunshot wounds. Shooting was the second most common means of committing suicide among young people in Wisconsin.

Among them was a 15-year-old high school student who fatally shot himself in 2010 at Marinette High School after holding his teacher and classmates hostage.

2 thoughts on “Many Killed by Teens Illegally Carrying Guns”