The National Is Really International

A sweet space, fun menu and great breakfasts and lunches. 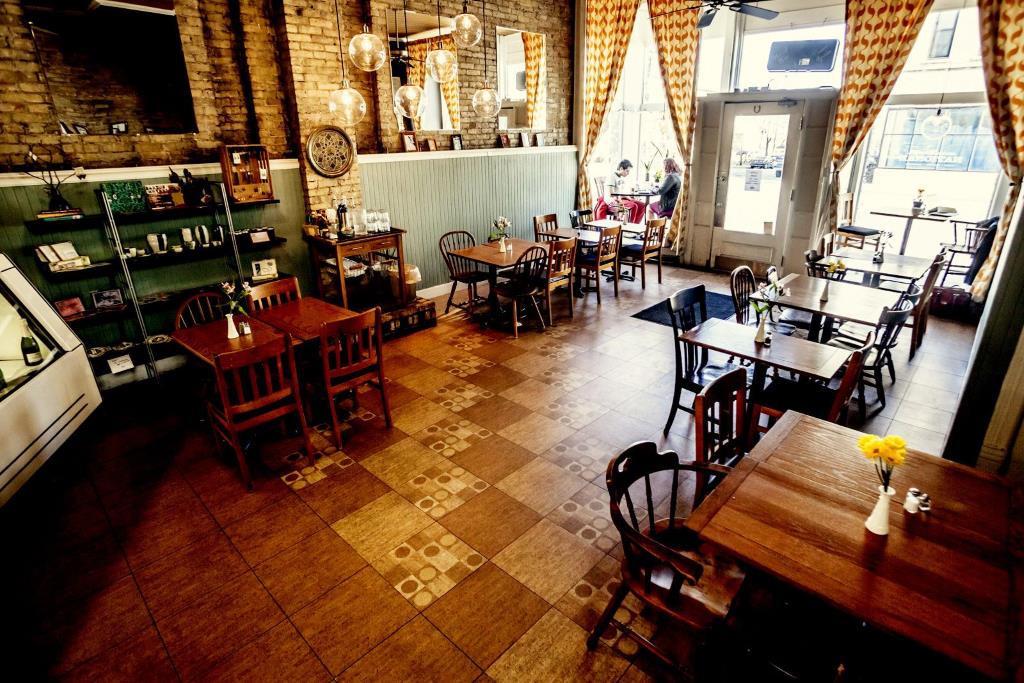 At The National, a potpourri of international dishes on the menu guarantees that dining at this charming restaurant will never be dull. The restaurant serves breakfast and lunch, but its menu is more inventive than you’d expect for a place that doesn’t serve dinner. After just two meals there, I felt a need for a weekly “National” fix.

The Pork Belly Sandwich, my first foray into the menu, suggested a risk-taking chef who might break some rules, because who ever imagined a sandwich stuffed with slices of crisp seared pork belly/pork fat would induce spasms of undiluted delight. Small slices of belly came in a crusty toasted sub-like bun topped with marinated jicama slaw and sriracha mayo. Take the heat from the mayo, merge it with the cool, slightly vinegary jicama, add the ooze of the tender fatty pork, and you have a hell of a good sandwich.

Sandwiches come with gluten-free, vegan tortilla chips and house dip, a small serving of humus. Ante up another $1.00 and substitute soup (broccoli-blue cheese the day we visited), salad, or fruit.

My companion chose the BLT&A —  bacon, lettuce, tomato and avocado on toasted sourdough with garlic mayo. She said, “This is the best BLT I’ve ever had,” and since she’s a kid and eats a lot of BLTs in restaurants, I took her at her word. She followed that with, “The bacon is really thick and has a lot of flavor.” Because she is the official bacon chef when we camp, I consider her an aficionado of the nuances of bacon in sandwiches. She also commented on the lettuce, “…mixed greens, not iceburg.” Even the sourdough is worth a mention as it came from Rocket Baby, that French-inspired bakery with locations in Wauwatosa and Bay View.

We polished off lunch with a shared Peanut Butter Rice Krispy Square, a potentially mundane finale, but not this time. Chocolate dwarfed the rice krispy layer, making this more like a solid chunk of dark and milk chocolate with a smear of cereal to keep it healthy.

The National, located on National Ave. on a busy corner in Walker’s Point, is small, with 16 tables for two that easily join together for larger groups. We admired the two tables that faced National Avenue. With floor-to-ceiling windows and an additional step up to the tables, they had a bit of privacy and an unrestricted view of the action on the avenue. Cream City-brick walls added character, while high ceilings alluded to a larger space. There were diners at every table, yet we never felt crowded. Mismatched wooden chairs enhanced the funky, comfortable, take-your-time ambience. This is both a neighborhood restaurant and a destination for people who come from the burbs and beyond and we noted both kinds of customers.

It’s also one of the few places in town where one can purchase jars of 5 Lilies, the local artisan jam, but the restaurant doesn’t actually serve it with meals. That came to mind on a second visit, this time for breakfast. My companion found the All-American Breakfast, bacon (ham or sautéed veggies), eggs, potatoes, and toast satisfying, but would have liked a smear of 5 Lilies, perhaps blueberry-lavender-peach, or pear-citrus-ginger, on her Rocket Baby sourdough toast. (Alas, the restaurant had run out.) The potatoes, roasted with bits of rosemary, were especially tasty; the Yuppie Hill eggs, obviously fresh; the thick-sliced bacon, crunchy and crisp. 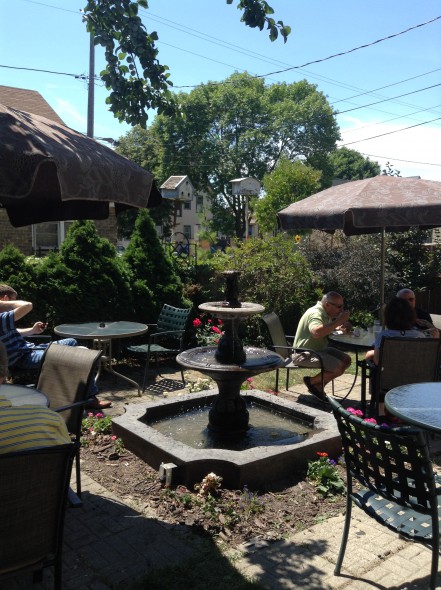 In the garden at The National. Photo by Cari Taylor-Carlson.

I tackled the Breakfast Burrito, a whole-wheat wrap with scrambled eggs, black bean spread, avocado, peppers, onions, cheddar and salsa and found it equally delicious. There was enough of everything but not too much, so I could pick out the individual flavors. The accompanying salsa tasted as if it had been made five minutes ago and added good heat.

On both visits, we wanted to dine in the secret garden behind the restaurant, but the lack of shade on two sunny, steamy August days drove us indoors. The addition of three or four shade umbrellas could easily remedy that problem. Just saying.

The variety of international flavors on the menu will bring me back soon. I’m sure they do a yummy rich Croque Madame, the French version of that decadent ham and cheese sandwich topped with béchamel sauce and a fried egg. And for anyone inclined to feast on a Full English Breakfast, there’s bangers, tomatoes, mushrooms, potatoes, beans, and toast. For comfort food, they offer Tonkotsu Ramen, rich pork broth with that seared pork belly, scallions, soft egg, nori, and egg noodles. For a preview of the latest tourist destination, I’ll put the Cuban Panini — pork loin, sweet pickles, ham, swiss, and Dijon mustard — on my bucket list for a future lunch at The National.

Specials come and go, a reason to visit often. We admired but didn’t sample such dishes as the Vietnamese Chicken Baguette, Chilaquiles from Mexico, and The Hawaiian, grilled ham and pineapple with swiss cheese and Dijon mustard on Rocket Baby ciabatta.

Next time I’ll try for a table in the shade in the garden but if not, I’ll do as my companion suggested, “Score one of those tables by the window.” 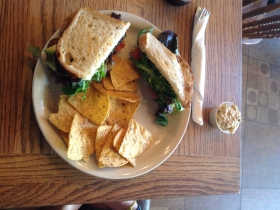 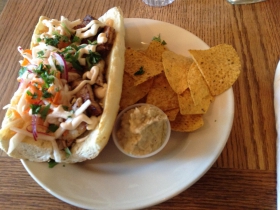 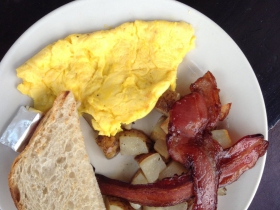 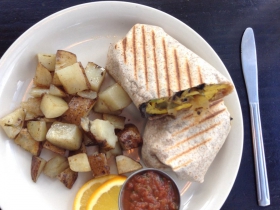 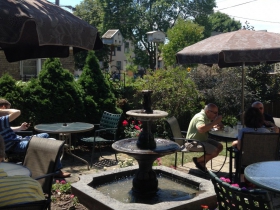 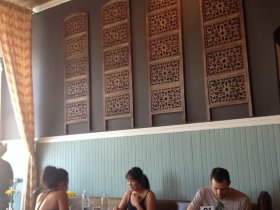 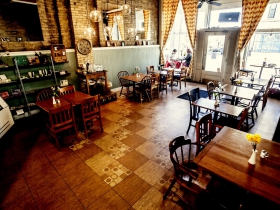