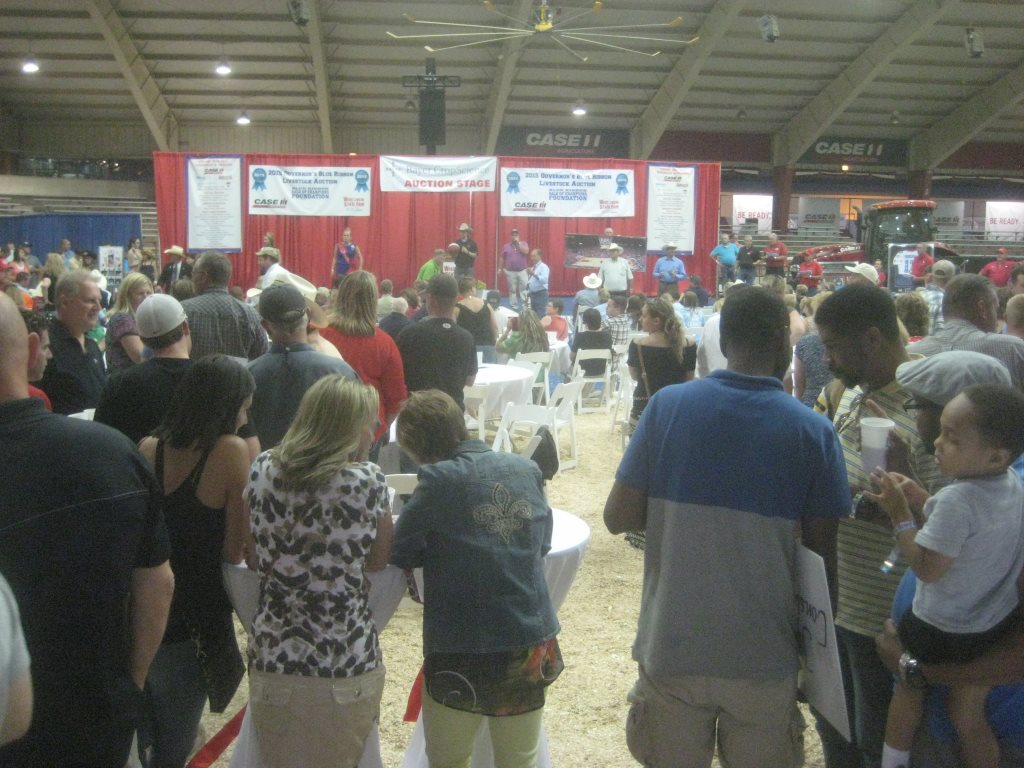 Gov. Walker was dressed in the cowboy hat, blue jeans and a blue pullover shirt. Photo by Michael Horne.

Governor Scott Walker is no stranger to raising money by peddling bull. Just look at his overflowing campaign coffers. Wednesday night at the Wisconsin State Fair, the cowboy-hatted Chief Executive and presidential candidate opened the Governor’s Blue Ribbon Livestock auction in the fair’s massive coliseum building. Supporters of the auction who paid $35 (a bargain for a Walker appearance) had ringside seats while the other attendees were obliged to watch the proceedings from afar, across the coliseum. No seating was permitted on the half of the cavernous hall that held the governor and the cattle. The proceedings opened with the University of Wisconsin brass band, under the baton of Bucky Badger. [View the video here. All 2 hours 43 minutes of it. Walker shows up at :46] The governor’s auction and affiliated charities helps to raise scholarship money for young farmers via the 4-H Clubs.. The governor awarded $50,000 in scholarship funds that night, based on the winning entries. In 2014, a record $300,000 was raised in the auction of the winners, up from a mere hundred grand in 2011, Walker told the crowd.

He was dressed in the cowboy hat, blue jeans and a blue pullover shirt. More Farm & Fleet than Kohl’s, but suitable for the occasion. 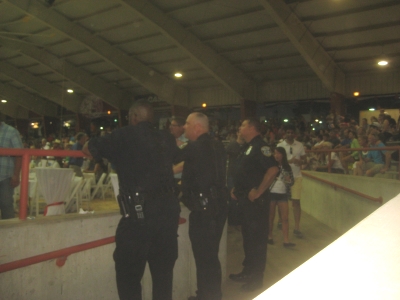 Security was tight, with nobody permitted to lean over railings on the portion of the coliseum available to observers. I do not recollect this arrangement in the past. Orange-shirted security guards were placed inside the ring along the railing spaced maybe 10 feet apart at most. Security included uniformed police officers of the City of West Allis, where the fair is held. Also, somewhat curiously, three City of Milwaukee uniformed police officers were also present.

Walker himself was only a speck in the distance from where this observer sat, and seemed to relish his role posing for photographs with the winners. This was a contrast from the style of Tommy Thompson who really relished the role of auctioneer, in a hucksterish (that is to say, Thompsonian) sort of way. His successors Scott McCallum and Jim Doyle served in the role creditably, but neither had a personality known to set a room afire, not to say a Coliseum.

Walker seemed more of a figurehead at his signature event, and left the auctioneering to the professionals. Listening to an cattle auction is an acquired taste for this observer, since I cannot make out the auctioneer’s words, nor discern any movement of paddles by bidders.

But, Northwestern Mutual paid $10,000 for a prize specimen, then released the animal — that is to say, the insurance giant gave it back to the auction to be sold again.