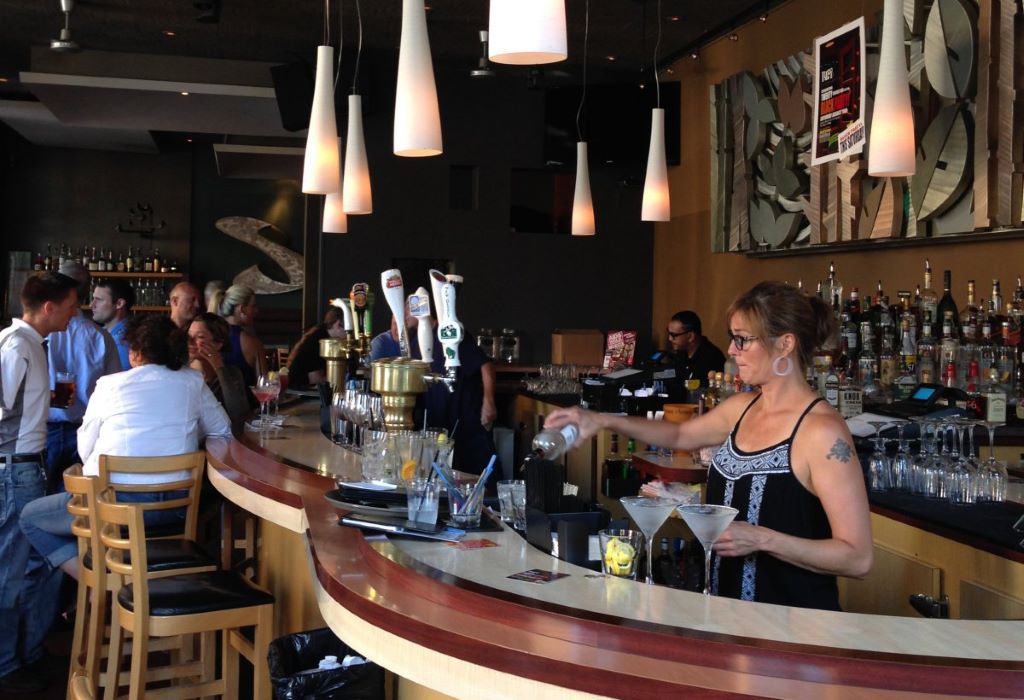 Twenty years ago four brothers with a custard stand business decided to take off their aprons and open a swank saloon on Cathedral Square. Designer Dan Taylor and artist Richard Taylor handled the ambiance side of the operation, Robert Taylor worked the bar, while sibling Jim Taylor took the reins of the business they named “Taylor’s.”

Dan came up with some clever plans for the place, including double-hung, ceiling height Dutch doors that could be opened fully, merging outside with inside. These have become the defining design element of the tavern, and in season, the doors are always wide open, adding to the welcoming atmosphere of the place, clean, uncluttered and quietly sophisticated. There are no signs or neon lights to mar the interior, and the limited wall space is largely given over to sculptures by Richard, whose work is generally in aluminum, and often massive in scale. [See his sculptures at the W. Wells St. entrance of the Milwaukee Public Library, and at the southeast corner of the Milwaukee Public Market.]

Somehow the design and the art manages to maintain a contemporary appearance without being dated or screaming its modernity to the passersby. It is settled in and comfortable, much like the clientele.

This was probably the first tavern in Milwaukee to feature pendant lights hanging on crooked wires, a trend that is all the rage today.

It was also one of the first taverns to fully embrace its sidewalk, and to feature outdoor drinking.

This seemingly commonplace state of affairs, judging from the proliferation of such outlets today, did not come without some effort.

This gave brother Jim Taylor something to do as his brothers put together the tavern’s nuts and bolts, including a lovely 1950’s era bar rescued from Eddie Jackson’s, a former Bay View tavern. Jim was soon awash in paperwork from the city, and had no shortage of meetings to attend to work out the details of the tavern’s revolutionary concept, such as it was seen back then.

Twenty years ago, the city had not streamlined the process for granting of extension of premises licenses, so it took a Resolution of the Common Council [File Number 941115] for Taylor’s to “establish and maintain a sidewalk cafe area on North Jefferson Street.”

The resolution also gave Taylor’s permission to install the doors leading to the sidewalk. When fully opened, the doors lie flat with the building’s walls. The problem is that the doors, “when being fully opened, will project into the public right-of-way of North Jefferson Street in excess of the 12-inch maximum distance permissible.” [Emphasis added. Note how important the word “being” is in that sentence.]

The wary Common Council, thinking forward, had concerns about the future of the doors, and decided to do something about it in their Special Privilege Resolution.

“Said doors shall be used/kept and maintained to the satisfaction of the Commissioners of Public Works, Building Inspection and Health.”

As I recollect, some of the folks who have held those titles over the past two decades have indeed come by and visited Taylor’s on occasion, but it didn’t look to me like they were inspecting doors at the time.

Enough with the doors! Let’s go in!

The tavern is colored in earth tones, and has a stained concrete floor. There is a stone ledge near the main (southeast) entrance to the bar. At happy hour it is stocked with free snacks including olives, crackers, and assorted cheeses that usually include brie. After you grab a handful of the munchies, your attention is directed to the main bar, which indeed is a sculptural statement to rival Richard Taylor’s work. A later, auxiliary bar is located on the south end of the room, and is used as needed.

The star of the show, though is this old Formica bar, a loopy, curvy affair, with some seats wedged between the bar and the wall, with others arrayed around its sizable perimeter. Other tables are arrayed along the walls and between the doors, and there is bench seating on the south wall. On a good day, the seats fill up quickly, with the crowd largely being middle-aged folks in professional attire. Some are residents of the area, and are apparently well-to-do, judging by their nonchalance at paying the freight for top-shelf liquors. As the sign states, “it’s a neighborhood bar.”

It’s just a neighborhood bar with Rolls Royces and Ferraris parked outside.

You will find also among the drinkers visitors from out-of-town who are here staying in the nearby hotels.

There is yet another category of regular here — city employees who find the place a nice respite from the office after the day is done. (No names immediately come to mind, but you know who you are.)

It could be said these civil servants provide indirect taxpayer support for the place, as they trade their wages for cocktails..

But the tavern is not just about pointy-headed bureaucrats, bean counters and pencil pushers. After Happy Hour fades to dusk, the tavern takes on more of a club atmosphere, with a younger, yet still well-heeled crowd. 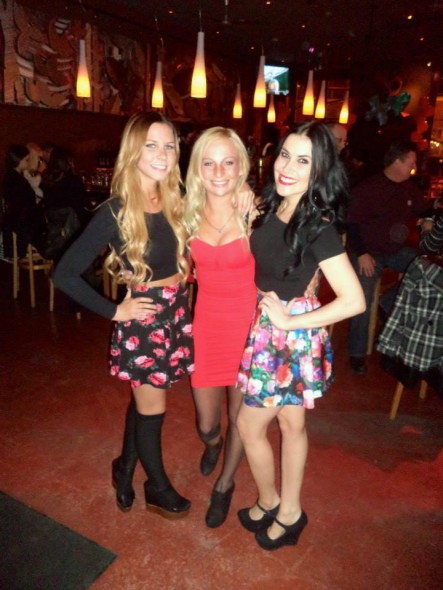 Service is attentive, with efficient bartenders and attractive, friendly cocktail service from lovely people like Patti Walczak. On a recent visit she served drinks to former Ald. Jim Witkowiak  just as fellow House Confidential Honoree Andy Nunemaker came in for a quick one.

So successful is the remodeling of the Taylor’s space, what with those doors, that it is easy to forget that Taylor’s itself occupies just 1,587 square feet of what is a 7,143 square foot building that also houses Flannery’s Bar and Restaurant and Real Chili. It was built in 1894 on a prime site across the corner from what was then Courthouse Square and is now Cathedral Square. In its original iteration, the building has space for five stores, In 1910, the a house of detention was located two doors south at what is now 777 N. Jefferson St.

In 1940, this space was “Dadd’s Drugs,” and in 1950 it was “Wallace H. Bahringer Drugs.” In 1958 the drug store made way for the architectural offices of Maynard W. Meyer & Associates. Meyer spent $10,000 to create a new masonry and glass storefront here. His associates included 8 males and one female, according to his occupancy permit.

In 1979 the space became the offices of real estate investor Royal Taxman, who, in his 80’s remains a champion table tennis player. [Taxman was an entrant in the 2015 National Seniors Games in the Table Tennis Singles 85-89 age category, and took first place in mixed doubles 85-89 with partner Phyllis Rash Hughes.]

Taxman spent ten years in the place until turning it over to Sam Brushel, who operated the American Indian Shop there until the Taylor’s renovation about five years later.

Meanwhile, the adjoining units included the trusty Real Chili — owned by Dan Helfer, who still owns the real estate, and a pair of shabby old bars located in most of what is now Flannery’s. There was also a greasy spoon cafe that lingered until Flannery’s absorbed it about a decade ago.

Today, the corner of Jefferson and Wells still rings with Cathedral Bells, and the area is more vibrant than any time in the recent past. Nearby N. Milwaukee St. is bustling with activity, and outdoor dining and drinking is an established fact in season. Pioneers like Karl Kopp [Elsa’s on the Park] and the Taylor brothers took a gamble when they envisioned this area as the hot spot it has become.

Taylor’s will celebrate its 20th anniversary Saturday, August 15th with a block party that starts at 3 p.m. 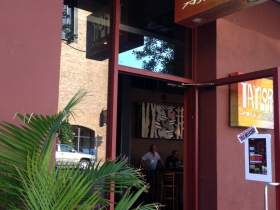 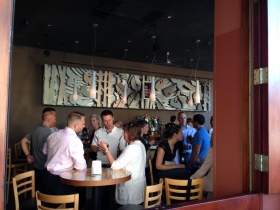 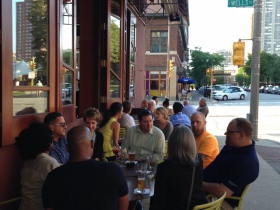 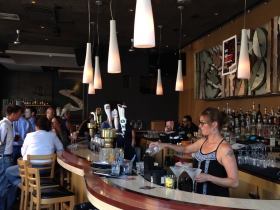 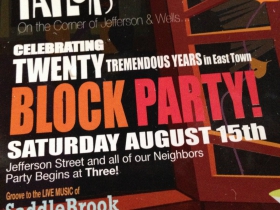 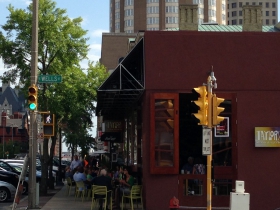