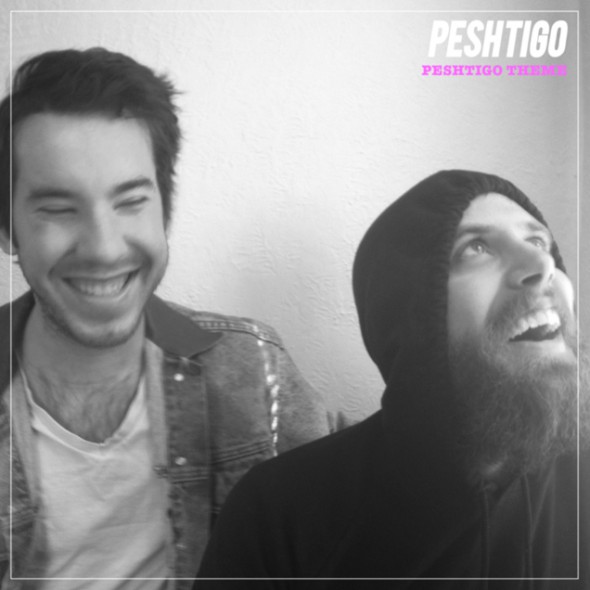 The dynamic of the 80’s style pop duo Peshtigo gives a new meaning to the name of the small, rural, Wisconsin town. In my mind, Peshtigo has now transformed into a challenging arrangement of musical experimentation. Evan Pilak and Matt ‘Dug’ Davis make up the two man band that have stuck close to their high school music tastes by coining themselves as an “80’s-mood-synth-pop” band.

Although the band has not yet released an album there’s something to be said for musicians who can harness all the goodness 80’s music has to offer without making their audience feel out of place for not wearing leg warmers or busting out the running man. Peshtigo combines the catchiness of 80’s music that has us all dancing when we hear it on the radio with the electronic-pop genre that has exploded over the past few years. Peshtigo has chosen to exclusively release their single Sad Song on SoundCloud with Urban Milwaukee. The final chorus has over 60 different vocal tracks and the band calls it their “most expansive and somber song.” I was able to interview the band and might I say they’re like totally righteous, dude.

When did you band get started?

I began writing music about six years ago. I’d write goofy rap songs for my friends to make them laugh. However, that became stale and I wanted to see what else I could do.

Well it started as a solo project but quickly became a duo with my guitarist, Matt ‘Dug’ Davis. We previously performed those rap songs live and he had always impressed me with his skills.

Was their a particular band that inspired you?

Oh boy. Well in high school, I used to collect 80’s music memorabilia. I paid $50 for an authentic 1983 Thompson Twins pink cutoff t-shirt with leopard print (just a bit embarrassing). Keep in mind it was 2004. That being said, I find inspiration in most things I listen to. Bits and pieces here and there.

On our frequent trips to my friend’s cabin up north, those 3-hour driving sessions tended to blur. One time though, we traversed past a sign for a river below and it caught my attention. It said, “Little Peshtigo River.”

We amicably lost our backup vocalist, Amanda Eggert, a few years back. She’s a wonderful singer.

Every song I write I envision it in a John Hughes movie. “80’s-Mood-Synth-Pop.” I think I just coined that term. You can use that if you’d like.

Oh we like M83, Wild Nothing, Washed Out, Empire of the Sun and The War on Drugs. Dug loves his metal and Dream Theater (heck, he’s friends with their keyboardist, Jordan Rudess). I know he would hate it if I didn’t mention Cloudkicker and Between the Buried and Me. They sound metal. Real metal. I think you can hear it in his solos. Go West, Joe Jackson, Thompson Twins and Tears for Fears influence my music.

I don’t see as many shows as I used to. We played with Canopies and I’ve seen them a few times so that’s always a blast. After your interview of GGOOLLDD I had to give them a listen. You know, just to see how we stack up. They blow us outta the water!

We arrange the music first then come up with lyrics. That’s not to say that lyrics are an afterthought. I just like the sound aesthetic to dictate where a song goes artistically. We originally wanted to share a story between a detective and his missing squeeze but that felt forced.

We don’t have a particular agenda in mind. Topics I write about range from millennialism to car theft.

We really love the radio stations and venues. Hearing our song on WMSE gave me chills. I’m not saying we didn’t work hard on the tune but everything about this was almost dreamlike.

If Liberace can make it, anyone can! Milwaukee’s evolved so much the last few years it’s hard to keep up. Whatever happens with the music scene and the city, I want to be a part of it.

We opened for Canopies and Worrier at the Cactus Club and did the Rave Basement a while ago. We hosted an HDSA-WI (Huntington’s Disease Society of America) fundraising event this last January. It was wonderful. I raised $4K for the cause and in return got a perm for a month. And then we played our equally as awesome 80’s set. Perfect match.

If you had to name one place that is your favorite place to play, what would it be?

Our first live gig was at Cactus Club. Unloading our gear and doing our sound check was sort of surreal. It was overwhelming to see the posters of all the bands who played there before. Seeing our friends and fans dancing to our tunes is quite the sight. You know you’re reaching them at some subconscious level. Or they’ve had too much to drink.

We haven’t actually. Music has always been a hard thing to keep up. I began most of these songs over 3 years ago and have been trying to perfect them since. Coming to terms with this unrealistic goal has let me just do the best I can and be proud of what we create.

I feel because we chose a decade that is known for it’s gaudy and fake nature, people assume we are writing ironic music. Sure there is some satire involved but we stand by every song we write; I am proud of what we release.

Oh, yes. We are a just a few tunes away from releasing our debut album.

With more and more songs becoming available, I want to challenge myself with our live show. I want to highlight the atmosphere and aesthetic our band brings. We already have a 2 ft. plywood saxophone that lights up in our show (My mom designed it and my dad cut it out). Something along those lines would be cool.

Finding time to practice. I quit music cold turkey about a year ago but that desire to create was always in me. To re-tap that creative passion really excites me for the future.

Actually, although it’s not a dumb question it happens often – when I try to describe our band’s sound to people, they assume we’re a cover band and ask what songs we cover. We like to create our own.

One thought on “Band of the Week: Peshtigo”